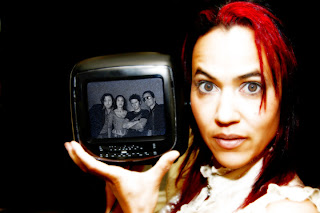 In my teens I was kind of rebelIious.  I had a general disgust with the status quo (guess that hasn’t changed much) and was drawn to like-minded individuals and music that could give voice to my angst, such as Patti Smith.

I first saw Patti Smith in 1971 when she was reciting poetry in a small Venice Beach coffeehouse.  She railed against everything - the government, people, life.  A few years later she formed the Patti Smith Group and churned out some of the finest punk rock of the mid-70’s.  Her 1975 album “Horses,” that commences with Smith’s scream “Jesus died for somebody’s sins but not mine,” is still one of my favorites. 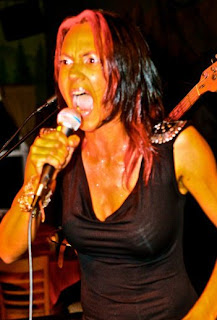 Static People released its first EP (which it calls on its MySpace page “Propaganda”) this April and it recaptures the definitive punk style of the mid-70’s Patti Smith Group.  The band consists of bassist Daedalus Howell, vocalist Dmitra Smith, drummer Mundo Murguia and guitarist Pascal Faivre. Static People is produced by Jason Carmer, who has also produced such notables as The Donnas, Third Eye Blind and Run DMC. The band members hail from wine country (or should that be “whine country”), Sonoma, California.  They write all of their own material and consider their influences to be the usual punk suspects - Siouxsie and the Banshees, The Clash, The Pixies, Sex Pistols, Radiohead, Bauhaus, etc. Although they fail to attribute their sound to Patti Smith,  you just have to listen once to Dmitra Smith to know that Patti Smith is truly the progenitor of Static People’s sound. (When I heard her I immediately thought the two Smiths must be related.  I haven’t found any information that confirms or refutes my conjecture.)   Even the band’s Facebook page espouses the anti-establishment anarchic position found in Patti Smith’s poems.  It states that one of their influences is “general disgust of government.”

The EP consists of five punk rants - “Save The Worst,” a pounding damnation of the “Save the World” evangelists that have gone before the present generation; “American Robot Mother,” a stab at the homogenous and consumptive nature of American society;  “Just Sink Down,” a driving tome about allowing oneself to devolve into the depths of darkness, despair and death; “Carrier,” an odd, slow, punk waltz poem about conquest, euphoria and relationship power struggles; and “You Know It’s There,” a highly processed, echo-laden, electronic homage about trust in knowledge rather than perception.  Each track has Dmitra Smith’s voice front and center, full of the same angst and derision that propelled Patti Smith to stardom.

You can catch Static People at gigs throughout the Bay Area and occasionally playing live on 87.9 FM,  San Francisco’s Pirate Cat Radio.  A video is in the works and should be released this December. If you are disgusted with the world as it is, and are looking for a safe outlet to scream about it, this may be your band.

Penfold said…
Well, this sounds pretty awesome to me. I'll definitely be looking into them.
November 2, 2010 at 4:18 PM