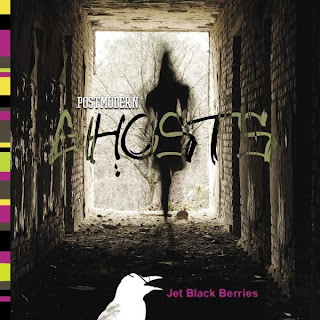 I remember the light the most.

There I was, late night, burning the midnight oil in the Ripple office.  Reviews to write, press releases to ready, new releases to schedule.  Sofi, as always, took her place in her bed to my right, snuggled in amongst the brimming stack of vinyl.  But I had no time to dig into that enticing vinyl buffet.  Ripple work called to me.  An eerie silence tingled my neck.

And then the light came.

Consciousness lost in a second, I awoke, no longer at my desk.  The room looked vaguely familiar to me, a place from a distant memory. Rising from my desk, I spun, disoriented, searching for a clue.  The familiar call letters KSPC FM blazoned on the wall across, separated from me by a thick layer of glass.  Lights flashed in chaotic rhythms, engulfing the switches, knobs and buttons on the mixing board at my hands.  A vinyl record spun to my right, pumping the room with moody, atmospheric, neo-gothic psychedelia.  Somehow, in some unspeakable way, I’d been transported through time.  Inexplicably, it was 1984 again.

And the record spinning was the Jet Black Berries.

Bursting onto the scene in the mid-eighties, the Jet Black Berries were part of the amazing stable of artists attached to the Enigma/Restless label.  The Cramps, TSOL, Tex and the Horseheads, 45 Grave, Green on Red, The Leaving Trains, The Pandoras, Redd Cross, Get Smart.  Talk about a label that had tapped into a sound, Enigma produced some of the all-time best American dark psychedelia ever released.  One band after another, there seemed to be no end to their talent.  And on that essential Enigma Variations volume I album, The Jet Black Berries ranked with the best. 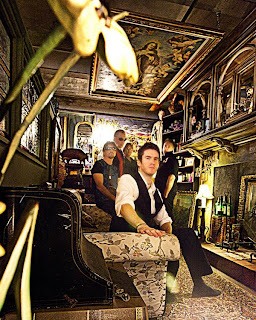 Blending a river of never-ending hooks to their blackened atmosphere and a touch of cowboy/western punk, the JBB released three albums in the mid-late 80’s, and contributed a standout track to the classic horror shtick sound track, Return of the Living Dead.  Then, like their zombie brethren, they disappeared.

As I rose from the desk in my 1984 radio station, I noticed something was different. The JBB spinning wasn’t Sundown on Venus or the soon to be released underground classic, Desperate Fires.  The sound was familiar, but different.  Hauntingly pulling at a memory, but inspiring in entirely new ways.  Ringing of the past, but powered by the energy of the future.

This wasn’t 1984; it was present day and the Jet Black Berries were back and better than ever with a brand new album,Postmodern Ghosts.  Reuniting four original members of the band with newcomer singer/guitarist, Johnny Cummings, the JBB had risen from the ether, back to lurk amongst the living.  And what an album they’ve put out!

You don’t have to be familiar with JBB’s original incarnation to jump right in with the start of this album.  Following a haunting synth and church bell opening, “God with A Gun,” literally erupts from the speakers in searing post-punk psychedelic glory.  Riding a guitar passage reminiscent of The Chameleons, “Don’t Fall,” this just may be my track of the year.  An outburst decrying people who use religion as an excuse to commit acts of barbarism, “God with a Gun,” isn’t just a great pop song, it’s potent.  “Are you sure this is a song you’re ready to sing/if God with a Gun is love, let’s make him king” Johnny sings over a rampaging, bass-heavy, chiming soundscape.  Guitars swirl and churn in glittering rivers of texture.  Dig that mid-song bass breakdown, the maniacal run across the toms in the post-chorus bridge, the layered harmony vocals, the subtle escalation of pace until the song explodes into that raise-your-hands-in-the-air-and-sing-along-at-the-top-of-your-lungs chorus.  I mean seriously, talk about a chorus that can elevate you to that place.  That special place where the world around you dissipates and the music enveloping you is all that remains.

But Postmodern Ghosts is no one song wonder.  “Ominous” tells the tale of the odd things that happen, the murder and mayhem, that somehow is still a part of the human psyche . . . unstoppable . . . always ready to re-emerge . . . an ominous presence.   Now take that message and wrap it up in a post-Church or later day Echo and the Bunnymen vibe of pulsating bass, rising and falling, swirling guitars and you’ll find one of the catchier songs to penetrate your consciousness in sometime.   “Pipes of Pan,” takes this Church influence one step further in a rousing, keyboard swept pumper.   Johnny even sounds a touch like Steven Kilbey here, singing deep in his range.

Throughout, the sound of the original JBB’s is as refreshing as that breath of yesterday.  Roy Stein’s drumming is solid and penetrating, Chris Yockel’s guitar shimmers and sparkles, Mark Schwartz’s keyboards lay down the atmosphere, and Gary Trainer, the main songwriter, drives the whole thing from the back of the bus with his unrelenting, swooping bass.  And the new kid, Johnny Cummings is a revelation, fitting into the mix seamlessly.  “Welcome to My World,” is another dark psych masterpiece, slow and inviting at times, vicious and intoxicating the next.  “Psychic Children of Doom” shows these cats haven’t lost the tongue-in-cheek horror attitude that landed them on the Living Dead soundtrack, and they attach this “postmodern ghosts on the radio,” vibe to a jaunty, muscular rocker.  “Invocation” rides an Echo and Bunnymen bass line through swirling mists of tension and mood.   “Garden of Delight,” has to be the next single off the album, so effectively mining the still-sparkling Paisley Underground-vibe of yore, married to a hyped-up sound of crashing guitars and smashing drums.  Catchy as fuck.

Then there’s “They Walk Among You,” a remade classic from the Sundown on Venus bonus album.  Digging into their quasi-cowpunk roots, “They Walk Among You,” is without a doubt the greatest zombie-epic ever penned and performed in song.  How this song has avoided being used in a zombie film soundtrack defies all logic and thought.  With zombies as hot as vampires these days, I will make it my personal mission to get this song included on some major motion picture.  Somewhere.

With the final pulse of the closing punkish rocker, “American Survival” still ringing in my ears, I watched as the radio control panel before me faded away.  I re-emerged in 2010, the new JBB album still spinning in my player.

The past is gone, the present is here, the future awaits.  And it’s all good.

Penfold said…
Here I thought I was the storyteller 'round these parts. How foolish! Great write up!
November 5, 2010 at 4:56 PM