Once upon a time, rock was king.  Good old fashioned, hard and heavy rock.  There was nothing to match the excitement that exploded in every testosterone-crazed, teen-aged boy’s adrenals when Nugent unleashed “Cat Scratch Fever,” or the universal man-nod of approval that followed AC/DC’s “Highway to Hell.”   I remember the fever that broke out when Back in Black was released.  The anticipation, the moment, the climax, the basking glow of the aftermath.  Breathless.  Sweaty.  You know where I’m going with this.

But over the years, good old fashioned rock got vilified.  If you liked it you were called a Neanderthal, a caveman, a lunkhead.  Rock was the genre for hairy men who lived in their parent’s basements, smelled like fermenting gym socks, couldn’t imagine a woman without the staples of the centerfold piercing her belly, and cultivated one or two brain cells at  most.

Then when bands like Arcade Fire broke through, rock got pushed father and farther down into the dirty underwear drawer.  Those who “knew” --critics who tried to set the stage for the rest of us-- only liked indy rock.  It was refined, cultivated. It was sensitive.

Forget that!  You may or may not like Arcade Fire, but one thing they aren’t is rock.  This sissy-fication of rock reached pinnacle levels of fey sensitivity with the success of bands like Keane and Coldplay.  Damn it.  I’m a man.  Got testosterone.  I scratch my crotch and drink milk right outta the carton.  I want it loud and I want it ballsy, dirty, slimy, in my face and nasty.  I want my rock dangerous and ready for a prison break.   I want my rock to rawk!

Fortunately, there are still some dirty mofos out there who get it.  This column is for them. 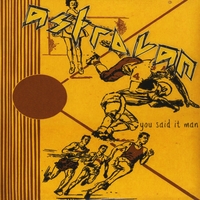 Astrovan – You Said it Man

One note is all it takes.  One note!  Dig that guitar, hear the fuzz, the grit.  Feel the thunder of the drum quaking in the background.  Layer on some thick as molasses bass dripping in honey sweat, drop in a front-man with swagger, a cocky in your face ‘tude, with a foul mouth and a throat full of spit, and we got the makings of a great rock album . . er . . .  EP.

Coming from Seattle, these guys suckled at the teet of Soundgarden, sprouted appendages in the womb of Alice in Chains.  They were sired by the riff-Lords of Guns n’ Roses, and AC/DC and Aerosmith.  And what emerged was fully-formed, ugly and nasty, pissed off and vowing not to take it no more.  It’s all there, in song two, “Twelve Guage Promise.”  I’m tired of talking to you/now it’s time for action.  You want danger in your rock? How's a loaded shotgun in your face hit you?

The retro-packaging of the Peachy folder lets anyone know that these guys got '70's riff-rock rampaging in their veins.  They blaze across the six-song EP, like a five-headed, hot-rod gang of parolees, pummeling out throttle-rock at high-octane levels.  Suck on the exhaust, grab your brass knuckles and join in the fun.

Buy here: You Said It Man 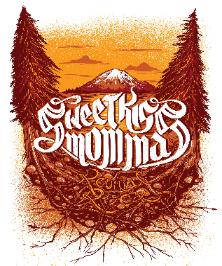 Revival rock indeed!  This gritty platter of ballsy, blues-ified, riff-rock comes at you like a blood-spittled gator crawling out of some time-warped southern swamp, where guitars still reign supreme, men drive 18-foot tall trucks with bigger gun racks, and Jack Daniels drips from mother’s breasts instead of milk.

This isn’t revisionist rock, it’s a fucking reclamation!  It’s a six-string declaration that rock in the classic southern vein is back-- the land claimed in the name of Queen Hustler Magazine and moonshine.  Bongs at the ready.  But not only does this shit rock, it grooves.  Really grooves, in that rolling way that only the best of Southern Rock ever could.  Just listen to “Son of the Mountain,” and you’ll get it.  That groove is thicker than the layer of mud caked on the tires at a tractor pull.

Like Pig Iron, these mutts are the real deal.  Sure there’s a touch of Skynard, but it’s more full-on rock than that.   Think Point Blank when they were good, 38 Special when they mattered, Blackfoot when they existed.  Take that whole vibe, douse it in axle grease, drop it off in some biker bar brandishing the Confederate Flag, $1 beers, and a protective fence around the stage and we’re all set.

I don’t know what these guys look like, but my imagination says that they’re big hairy brutes who could put the fear of God into anybody who crosses their path.  Just the way rock is supposed to be. 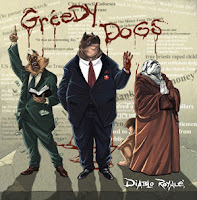 Fuck Axl Rose!  Take a band that mattered and turn it into a living joke?  In front of the whole world?  Not on Diablo Royale’s watch!

Churning out a brutal beast of venomous rock and roll, Greedy Dogs is the clamor of testosterone-laden street curs no longer content to sit back and watch the music they love die.  Guitars at the ready, grasped as surely as if they were M16 machine guns, aimed squarely at the solar plexus, Diablo Royale swath themselves in bathtub-meth, hard rock savagery.

“Resistance,” with it’s “six feet underground” refrain and mad-as-hell riffery is as certain to imprison your ear as the first time you ever heard “Paradise City.”  Then, without letting up for one moment  “Greedy Dogs,” unloads with the mother-of-all massive hard rock riffs, guaranteed to whip the punters into a frenzy.  Drugs, riots, groupies.   Diablo Royale are a return to those heady days when rock really mattered and no hotel room was safe. Hear that television crashing through the 18th floor window?  Yeah, that's them. 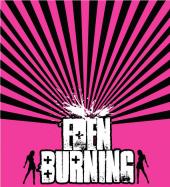 Eden Burning got one singular message for the American public.  They got penises and they ain’t afraid to use em.  Lock up your daughters, chain up your wives, this is the return of cock rock with nary a condom in sight.  Banged Up N’ Dirty?  This is get down, humped-from-behind, filthy and obnoxious rawk.   This is a Russ Myers B-rated, G-cup film brought to life, soaked in beer, whiskey, body fluids and left bare-naked on the floor, exhausted, spent, and begging for more.

“If You Want Me,” sums up these one-eyed monsters’ world view. “The girl was a freak, liked to do the crazy mambo,” spit out amidst the crushing powerchords and vibrator-paced drums and bass.  Power?  Hell yes! As the Pope would say, these guys pound it out as viciously as a trained monkey using my ball sack as a boxing speed bag.

“Glitter Girl,” spits out glammed up and sexy, but no less porn-tastic.  These guys are like the rust on a strippers brass pole, festering from years of contact with body fluids.  Toss in a guitar lick that’s just about as sexy as said stripper and we got a tune that should keep dollar bills flowing in girlie clubs year round.

I don’t know who they sound like.  Kiss?  Nugent?  Does it really matter?  It’s sleazy, cocaine-addled, junk rock cranked up to mind-melting, bug-eyed ferocity.  Isn't that what rock’s all about?

Bufftbone said…
This is right up my alley, especially Astrovan and Sweet Kiss Mamma.
November 8, 2010 at 5:14 AM

Penfold said…
Holy cow, that was one super exhalation of righteous anger! Love it!
November 8, 2010 at 6:49 PM