Hot on the Heels of Their Critically-praised Ripple Music Debut, Grand Atlantic Light Up the Soundtrack of Gossip Girl 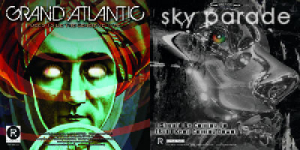 Following hot on the heels of the success of their Ripple Music debut split 7" single, Grand Atlantic keep the pedal to the metal, building momentum and converting the uninitiated to the Grand Atlantic ranks.

Taken from Grand Atlantic's massively praised second album "How We Survive," the hot single "Used to Be the Sensitive Type" was remixed and remastered for inclusion on the Ripple Music split single which also featured the KEXP Top 20 hit by Sky Parade, "I Should Be Coming Up (But I Keep Coming Down."  Since then, things have only gotten busier for the Australian band.

Locked in the studio working on songs for their 2011 third album hasn't kept Grand Atlantic from touring Japan and readying another US tour in 2011.  With dates already set from coast to coast, including a four-day stay at SXSW, fans will have plenty of opportunity to catch Grand Atlantic's heady, trance-inducing psychedelic pop single.  And the US audience is definitely catching the Grand Atlantic wave. The first episode of season 4 of the hit TV show, Gossip Girl featured Grand Atlantic's Until it's Gone," bringing in tons of new fans.  The video for "Until It's Gone," featuring footage from the recent Japanese Tour garnered thousands of hits after the band's Gossip Girl debut.


Check out the video and hear the song that captured the hearts of Gossip Girl fans everywhere.

Pressed in extremely limited quanties, the Ripple Music s 7" split single (pressed on glowing orange vinyl) is still available through www.ripple-music.com and can be found everywhere on Grand Atlantic's tour.

“Gives Oasis a run for their money.” (Courier Mail, AUS)

"Grand Atlantic molds the psychedelic post-punk ethereal moods of their countrymen, The Church, with the shoegazing swirling madbeat of The Stone Roses, and toss in a touch of garage crunch a la Ripple favorites The Thieves just for kicks. The results of this combination of psychedelic distillery are intoxicating…”(The Ripple Effect, USA)

“…This is the excellent album Oasis should have done after What’s the Story Morning Glory but didn’t…”(Lucid Culture, USA)

“Grand Atlantic’s second full-length album is chock-full of pop rock, with big sounds, singalong hooks and catchy melodies… How We Survive is a masterfully crafted record.” (Time Off Magazine, AUS)


www.ripple-music.com
Posted by The Ripple Effect at 12:21 AM