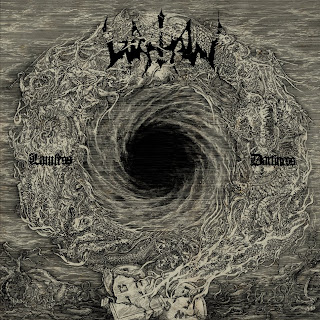 The events described below took place from 7 AM to 8 PM on (date omitted).

There was nothing to indicate that this past Wednesday would be any different from any of the Wednesdays that came before.  I awoke with the preset alarm, cleaned myself up, ate my breakfast, and proceeded to work.  My workday was filled with the normal rigamorole I had come to expect.  Indeed, the
perfectly rehearsed normalcy was not marred by an incident either outstandingly good or bad.  After my work was completed I grabbed my lunch container and left the office for home, unaware that my life was about to be turned upside down.

Glancing at my watch revealed that I had about an hour to kill before I would normally eat dinner.  This suited my needs as I had finished reading a book I had checked out from the local library, and could stop there on my way home to pick out something new.  The sun was shining brightly in a cloudless sky when I pulled into the library parking lot around 6:30 PM.  I made my way inside the building, dropped off the recently completed book in the return chute, and proceeded to the new release section.  Luckily, a title jumped out at me after searching only the first few shelves.  However, knowing the bitter disappointment of judging a book solely on title or cover alone and being nonplussed later, I decided to sample this new book before I left for home.


Making myself comfortable in an unoccupied window cubby, I opened the book and started to read.  As if on cue, the strange occurrences quickly began.  First, at the snap of a finger the once cloudless sky was filled with dark, ominous clouds blotting out the sun.  Perhaps more disturbing was the fact that the new clouds seemed to be centered on the library, with the clear sky it replaced visible only about a block away in any direction.  Although no rain fell, enormous claps of thunder and tremendous amounts of lightning erupted from
the sky outside my window.  I watched in shock and awe as two bolts of lightning together struck one point creating a gigantic V of blinding light.  Eerily, when my vision cleared there were five men standing right where the lightning had struck moments before.  The five men all wore black clothing, assorted studded
armor pieces, bullet belts, chains, leather jackets or vests, and to top it all off three had painted their
faces white evoking the look of a corpse.  After a quick exchange of glances, they charged right into the library and surveyed the room.  One of the men raised his arm and pointed right at me. 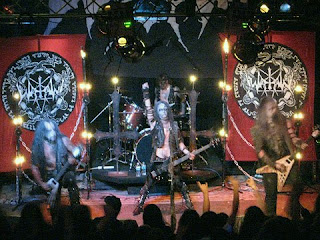 “Are you the one who calls himself Penfold?” demanded the long haired man who I assumed to be the leader of the group.  I contemplated lying, but the look of intensity on the living corpse’s face coupled with what looked like blood on his jacket told me that would probably not be wise.

Not wanting to show any fear or uneasiness lest it provoke an unwanted response, I put my book down and responded to his query.  “Yes, I go by Penfold.”


“Penfold, we are Watain!  We have traveled from Sweden to spread our music across your land.  Join us!”

“Okay,” I said with some trepidation.  “What kind of music do you play?”

Oh boy.  My stomach tied itself up in knots.  “Look uh, Mr. Watain or whoever you are…”

“Ok then E.  Are you sure you’ve got the right guy?  I mean I love all kinds of music, but I have not come across much in the way of black metal that I can really get behind.”

“Yes Penfold, we are sure.  Forces of darkness directed us to you from beyond this mortal plain.  They anticipated your initial response and had us bring along a copy of our newest album, Lawless Darkness.  Listen and be forever changed.”

With the unimpressive black metal exposures of my past running through my mind I took the proffered CD player, put on the headphones, and pressed play. Really, I just hoped it would be decent.  Rejection was not something I could see these five guys taking well, with E’s talk of ‘forces of darkness’ casting large shadows of doubt on the prospect of their sanity.  The music began.

A few short seconds of background sound clashes yielded to maddeningly fast blast beats, intense riffing, and growled vocals.  In short, “Death’s Cold Dark” at first was everything that I had come to expect from the genre.  But wait, what was that?  Are my ears playing tricks on me or did the blast beats cease for more than a moment, and was that a series of new muscular guitar riffs thrown into the mix?  Was the vocalist actually changing the pitch of his growled lyrics to add variety to individual passages and better match up with the music?  Well now, that was different.  This might not be so bad after all.

Songs that followed such as “Malfeitor”, “Reaping Death”, and “Four Thrones” proved that my initial reaction was indeed shortsighted.  These are complex songs built on series of devastating guitar riffs that pulverize the listener with their power and never fall into monotony.  I like that.  Watain threw another wrench in the gears of my black metal preconceptions when halfway through the album the title cut proved to be a fantastically compelling instrumental.  I really like that.  To top it all off, the band saved the best for last.  The last two songs form my personal favorite portion of the album.  “Kiss of Death” gallops along for the most part at a comfortable pace, but eventually the guitars take on a real sludgy quality and slow the proceedings
down to a dirge-like crawl.  An extended outro to the song leads perfectly into the tension filled minute and ten second build up to hyperspeed that marks the beginning of “Waters of Ain”.  This last song is a fourteen and a half minute odyssey that effectively summarizes all of the music that came before it on the album.  It alternates from crushing you underfoot, to soothing you with beautiful instrumental passages, back to being intent on your demise, to finishing with a well orchestrated epic guitar solo.  Oh yeah, I like that a lot!

“E, I was wrong.  Your album Lawless Darkness has opened my eyes to a whole new darkened world.  Listen, I still don’t know if I like black metal as a whole, but I know that I really like what I just heard.  You do have the right guy.  How can I help Watain?”

E and the other four men looked at me with approval in their eyes.  “Here.  Put on these black clothes and this white face paint.  Together we will conquer this land.”

Soon enough I was properly garbed and ready to take on the world.  I knew life would be different from now on, and I was thrilled at the prospect.  “Let’s do this!”

I like this review. It's original, funny, different. Nice one, keep it up!