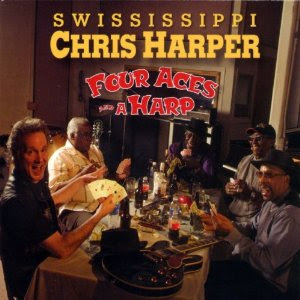 Lately I have received a plethora of blues harp albums.  By the volume received you would think that everyone in America plays a pocket blues orchestra. A few artists are distinctive - a cut above the rest.  But, generally, blues harmonica players play covers. Most blow a decent Willie Dixon, Lightinin’ Hopkins or Muddy Waters tune or two.  The problem comes from a desire to compare.

I have heard the original recordings. The originals are old, scratchy and monophonic - victims of the state of technology at the time they were recorded.  Yet, they are full of heart, soul and passion.  Through the tin cup, hollow bass, sound of the original recordings there is the visage of true emotion and amazing instrumental improvisation.  Unfortunately, many modern blues artists take such improvisation as gospel and play exactly as the blues master recorded it.  So, how do you compare the original rendition to that of the cover? You look for the artists to make the songs their own.  You listen for feeling. You hope for the unexpected.  Does it move you or is it a mundane faithful reproduction?

One of the discs I recently received is a new release Four Aces And A Harp from Swississippi Records with namesake “Swississippi” Chris Harper (what better name for a harmonica player than “Harper?”) blowing eighteen tracks of blues - fifteen of which are covers of songs by blues greats, two that are originals and one that is a converted jazz classic.  Harper pulled together a few legends - Willie “Big Eyes” Smith and John Primer (Muddy Waters’ bandmates) and Bob Stroger (Otis Rush’s bassist), and grabbed some of the best young traditional blues talent around, to record the CD.  According to the liner notes his aim was to produce a traditional Chicago Blues album.  However, what resulted was a blues lovefest as the musicians sat in a circle and played and recorded.  Many of the tracks are supposedly first takes.  As a consequence they contain that instrumental improvisation and freshness lacking in so many other modern traditional blues albums.

Harper is no slouch on the mouth organ.  He started sucking wind when he was 12 years old and, over the years, has learned from some of the best.  He has a tone, tempo and technique suited to the traditional Chicago Blues genre.  With vocal help from modern day blues players as varied as Jimmy Burns of the Jimmy Burns Band, Tail Dragger and Kenny “Beady Eyes” Smith (Willie “Big Eyes” Smith’s son), and from legends Smith and Primer, Harper invigorates the old material and also provides soulful renditions of his own songs.

It is a special treat to listen to Harper’s mournful harp wail on the song “I Smell Trouble” as it perfectly accompanies a heart-rendering vocal performance by Jimmy Burns. Heavy blues guitar is embellished by Harper’s warble on Muddy Water’s classic “Long Distance Call.”  Sonny Boy Williamson’s “Eyesight To The Blind” is given a blues swing treatment in which each performer gets to shine.  Sleepy John Estes’ “Worried Life Blues,” which has probably been performed by every blues player from B.B. King to Eric Clapton to Kenny Wayne Shepherd, is given a down and dirty slow drudge cadence that actually sounds like the band is worried.  The sole “non-blues” song on the album, an instrumental version of Duke Ellington’s “Don’t Get Around Much Anymore,” crosses out of the big band jazz genre and grabs the feeling that the blues get when greats such as Pinetop Perkins tickle the ivories.

There is much, much, more on this album and it is all worth a long listen.     While the album does not break new ground, it is a strong effort that contains stellar recordings of many well-known Chicago Blues numbers by some of the original blues masters and their attentive modern day students and progeny.  The trading of harp leads by Harper and Willie “Big Eyes” Smith on Smith’s “Born In Arkansas,” by itself is worth the price of admission.