The Single Life - 7" of Fun featuring, The Banquets, Montagna and the Mouth to Mouth, Aaron Zimmer and Starfucker 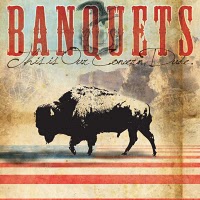 The Banquets – This is Our Concern, Dude

What started out as a lark, a fun project by a group of friends with a “The Big Lebowsky” fetish, took roots, sprouted wings, and emerged from it’s “joke” beginnings into one helluva full on melodic punk band.  And I mean, one HELLUVA band.  Just listen to the chiming guitars, that thick and steady bass line, the confident smash of snare, tom and cymbal, and you’ll find nothing amateurish about their playing.  More impressive, dig the confidence in their song writing.  Guitars sneak in and exit just as quickly. Songs build to tension with a genuine feeling.  There’s nothing contrived here.  Just heart-felt passion and some damn fine songs.

And what songs would those be?  How about the beautiful jangly guitar intro leading into the stampeding melodic punk that is “Lyndon B. Magic Johnson.”   Then there’s the anthemic call and response chorus of “Eleanor I Need a Garden.”  Both songs chock-full of singable choruses, captivating hooks, and impassioned singing.  “Eleanor,” even hints at a touch of Oi Punk with its “Ooooh ooooh” vocal hook.   Great stuff.

But things don’t end there.  To give you even more bang for your money, this slice of midnight blue vinyl adds two more tuneful rockers on side B.  “What a Bunch of Aaron Burrs,” up the dissonant punk attitude, dropping in some serious guitar chops amongst it’s ringing guitars and crashing cymbals.  “I Wish I was a little More Lou Diamond,” bursts out on a wail of choppy guitar chords, building in some steamroller bass, and all of it leading into a workout of energy and melody.

Don’t know what the dudes’s obsession is with people’s names in their song titles, but I don’t really care.  Put out by Black Numbers, this is one of the best 7” debut’s I’ve heard all year.  The Dude abides. 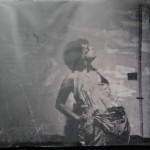 Here at the Ripple, we’re blessed to be contacted by some seriously cool record labels and PR firms, and one of two of my favorites are Chuck and Will over at Bear Trap PR.  Now, it’s true I don’t necessarily fall for every disc the guys send over, but when I do fall, I tend to fall hard.  I think over the years, the Bear Trap men have learned what sounds I tend to gravitate towards, which is usually more on the melodic or straight up punk end of the spectrum.  And over the years, they’ve sent us some great bands, like Balance and Composure and The Cold Beat.

Now here comes Montagna and the Mouth to Mouth.  The brainchild of singer/songwriter Jason Montagna, the Mouth to Mouth released their debut album “L’avenir” in 2009, and now come roaring back with a tasty 7” slice of licorice pizza, Ultrapolyamorous b/w At Full Speed.  And I do mean roaring.  A different sound from the majority of the emo-oriented punk I associate with Bear Trap, Montagna and the Mouth to Mouth fuse shoegazer beats, indie rock, and punk attitude to create a full on blast of noise pop unlike any I’ve ever heard before.  Guitars crash, sounds build, voice hail, bass thuds and the whole thing just keeps coming at me, wrapping me up in some heady vortex of sound as if I was caught in the middle of a punk tornado.  Of the two, I think I like “At Full Speed” better, there’s just something completely endearing about the garage rock three-chord intro and the baby doll female vocals.  But both songs are totally intoxicating in their psychedelic, dizzy haze.  Never before has noise sounded so sweet. 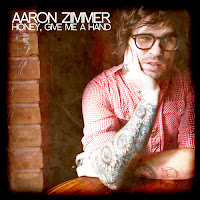 Aaron Zimmer – Honey, Give Me a Hand

It was last year sometime that we at the Ripple fell under the spell of earnest singer/songwriter Aaron Zimmer, and his full throttle pop.  Now after spending a year playing in the NY area, Aaron comes back with his first new song since his debut, Live Wires.  Playing it a bit looser and rootsier than most of the debut album, “Honey, Give Me a Hand,” is a knock out of a follow up.  Aaron seems to relax a bit on this song, aiming for a heart-felt song of love’s redemption, and loosens the reigns on the production.  The whole song feels giddy with spontaneity and the energy of a band banging this out in the living room of a good friend’s home.  That’s not to say it’s sloppy.  Heck no.  I don’t think Aaron could do anything sloppy, he’s too much of a perfectionist.  Let’s just call it easy.

Easy, and terrific.  Just as he did with Live Wires, Aaron has crafted a song of indy rock perfection.  As with all Aaron’s songs, the melody is right in the forefront, bringing me in, letting me know I’m in good hands.  The casual rush of the song sweeps over me in a moment of shear pop delight.

The song is available on iTunes and Amazon as a download, but really it’s a predecessor for the upcoming album.  I’m already standing in line. 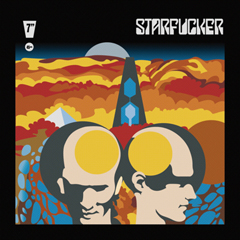 Not at all what I was expecting from Polyvinyl Records, the home of such guitar-based indy bands as Joan of Arc and the M’s.  Starfucker are a bursting supernova of cosmic electronic techno indy pop that soars into the stratosphere like a tranced up rocketship of ecstasy disciples.   This is heady, trippy techno disco for the post-rave generation, and damn if it doesn’t do it well.  "Julius" is a bouncy, swirling quasi-shoegazing/ambient techno delight. Synths percolate like early am coffee while the vocals and textures swirl in a dizzying whirl like cosmic dust behind a comet.

"Helium Muffin" is about as ethereal as the name suggests.  A hypnotic blend of spacey synths and throbbing dance rhythms.  Sure to please fans of upbeat dance pop and still interesting enough for the rest of us.  Get the party started, keep it started.

Email ThisBlogThis!Share to TwitterShare to FacebookShare to Pinterest
Labels: Aaron Zimmer, Julius, Montagna and the Mouth to Mouth, new singles, new songs, Starfucker, the Banquets, this is our concern dude, ultraployamorous