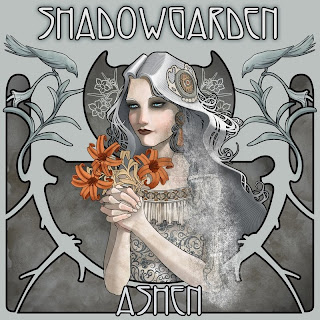 I usually find gothic rock a mixed bag of goodies. On the negative, the music can be sappy and overly glorifying in its depression. On the positive, it can be sappy and overly glorifying in its depression. Basically, what I’ve found is that when gothic rock is done good, it can be a thrilling ride into tragic romance and deep brooding desire for love, and that’s what I’m getting with Shadowgarden’s Napalm Records release, Ashen. For the most part, the music is upbeat, driving, and can flat out rock. There are some of the quieter, more moody moments mixed into the album, and they work to perfection as well. Let’s put it this way, when I listen to Ashen, I don’t feel the need to light candles, kill the lights, drink wine and stare out a picture window at the falling rain. I want to take said glass of wine, throw it fiercely at the wall, and destroy my furnishings!
Ashen is layered with great dynamics and haunting melodies, and the vocals of Johan Ericson are powerful, yet you can hear a certain amount of vulnerability to them. The guitars have a nice crunching tone to them, but they’re not overbearing and oppressive. There’s an almost accessible quality to the production of this album and the songs could very easily find their way on your more alt oriented rock stations. I hear a lot of Paradise Lost in this, but not the discordant elements of P.L., more like the heavy melodic moments . . . basically everything that I’ve ever loved about Paradise Lost. There’s another sound weaving its way through this music, but I can’t put my finger on it . . . but when I do, whoa-boy! Don’t think for a second that I won’t tell you who it is!
Ashen opens subtly with “Shadowplay” and a beautifully strummed acoustic guitar, and then the up tempo, dense wall of distorted guitars explode in a shimmering display of melodic excitement. The song ebbs and flows between soft, ambient passages to huge choruses filled with the kind of melodies that would have an arena full of happy-we’re-sad fans singing their asses off. I particularly like the dynamics that these guys show n the song writing and production of this song. They’ve created an excellent mood with the music and they keep the song moving forward, rocking heavy when they need to and creating elements of serenity to break up the bombast. The more I listen to this, the more I marvel at the intricate elements mixed into the various sounds. Shadowgarden do an excellent job at song-craft and I’m compelled to give this song yet another spin due to the interesting bits of ear candy mixed throughout. 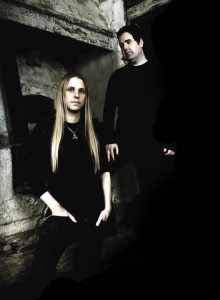 You can’t have good goth-rock without the inclusion of a female voice and Shadowgarden do just that on “With Love and a Bullet.” Though it may seem cliché to have the female voice worked into music of this particular genre, it also seems naked without it, and in truth, “With Love and a Bullet” is enhanced by this element. Lisa Johansson voice is amazing! So elegant and sensual, so sorrowful and hurt, so vibrant and filled with emotion, Johansson works her voice to perfection as the music shifts from explosively distorted bursts of guitar, drum, and bass to synth-driven, quieter passages. And once the song hits the chorus, feel the heart strings get pulled as she separates her voice from the harmonies and essentially carries the song to the stratosphere and beyond. Again, this track is exquisitely crafted . . . listen to all of the fascinating pieces of aural sweetener dancing around the mix on this one . . . little vocal add-on’s, textural guitar pieces hidden behind the distorted bass rumblings, volume swells of keyboards making the song sound even bigger than it is. You can’t listen to this one just once, there’s just way too much going on that requires your attention!
“Murky Waters” is another haunting gem, incorporating big key strikes on the synths over the droning walls of guitars. The chaotic elements of sound suddenly dissolve to reveal Ericson’s beautiful and sultry voice crooning about personal isolation and inner torment. Accented with those huge bursts of sound that we’ve come to expect, the vocal performance on this song is no less than magnificent. Whether he’s singing over barren soundscapes powered by keyboards and rhythm or over heavy and imposing guitar riffs, the voice retains a level of elegance and composure. Kind of like the musical equivalent of falling in a pile of shit and coming out smelling like a rose, Ericson’s voice has a shine to it no matter how dark its surroundings. 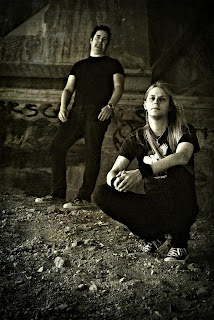 “Slowmotion Apocalypse” shows Shadowgarden wrinkling the fabric of the sonic tapestry. With the last track on the album, the band suddenly throws the mid-tempo or upbeat romantic drama to the side of the road and slow the tempo way down, akin to being so worn and tired by the weight of their guilty burdens, the music crawls through the gloom, never out of it. This song shows a heavier side to the band, even when the song breaks down to its ambient core and acoustic arpeggios, the song is a slug . . . and I mean that in the most positive way. They even utilize a little death growl in the vocal performance that, for me, enhances the dreadful mood and texture of the song. Searing guitar leads blaze from the din, acting a brief glimmer of hope in the darkened mire of depression. Brilliant song . . . fucking brilliant song!
Alright . . . never heard of these guys before and it turns out that this is their debut album, though Ericson is no stranger to the genre. Apparently this guy fronts or is an important cog to a band called Draconian, who share the mindset of bands like Sentenced (Racer just got a boner). For me, that matters not. What matters to me is that Ashen is a top to bottom emotional mover and ear pleaser.  Think what liked the most about it was just as I was beginning to think I knew where they were going they changed things up by tossing in a curveball at the very end to make me question everything that I’d previously heard and made me want to go back to try and rediscover something that I must have missed. Also, the songwriting and production aspects are out of this world, making me want to continue spinning this one because it feels so fucking good! Hat’s off, gents . . . can’t wait to see where you go with the next one!  -  Pope