The Kings of Frog Island - III 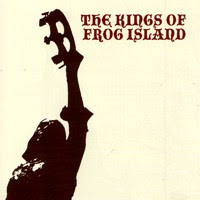 This sounds like the album I’ve always wanted Queens Of The Stone Age to make. And that means it sounds like Wishbone Ash and The Groundhogs playing a festival on the island where the 1973 movie The Wicker Man takes place. The Kings of Frog Island are a collaboration between guitarist and producer Mark Buteux, R. "Doj" Watson and Mat Bethancourt, of the awesome band Josiah (R.I.P.). III is the third and final installment in a trilogy that began in 2005. I never heard the first two records but am now motivated to investigate them further.

I can just imagine Christopher Lee prancing around as Lord Summerisle to the opening song “In Memoriam” as tribal drums pound and a list of the deceased is read. Britt Ekland could also do her lascivious fertility dance to tempt the inspector to this song, too. “Glebe Street Whores” is in complete contrast to the opener with a Groundhogs boogie jam and distorted vocals. Nice one-two punch to start this thing.

“Bride Of Suicide” and “The Keeper Of…” are more in the Queens Of The Stone Age vein but a bit more psychedelic. Nice fuzzed out tones and swirly backwards guitar parts are held down to earth by hypnotic bass lines. “Dark On You” and “Ode To Baby Jane” are doomy but not Sabbathy. Depressing is probably a better description.

There’s probably a storyline here that I haven’t been able to figure out. Maybe if I get the first 2 volumes I’ll put the effort into figuring it all out but for right now I’m too busy blasting this one. I’m just glad The Ripple Boss gave me this one because this sounds like the type of thing that Pope and Racer would play at dawn on one of their epic California road trips. What do you say you fly me out west and we give it a test spin together?