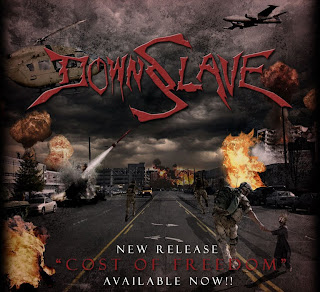 Nestled in a southern forest where your nearest neighbor is either a bear or that guy who guards his still with a shotgun, you might just find the five guys of Downslave brandishing their own firearms or sucking down their own brew of grain alcohol. Hailing from Knoxville, Tennessee, these guys have some of the sludge-y, swamp-y, doom-y character that we’ve come to expect from hard edged music of the South. The guitar tones are oppressive and immensely heavy, and there’s an attitude of invincibility to the intensity of the music. This is heavy metal done the American way. Music created with complete disregard for the well being of that guy sitting over there minding his own business. Cost of Freedom should have been the soundtrack for every American conflict since the first Gulf War, or at the very least, should be standard issue in every M1 Abrams tank as the sucker goes rumbling across the wastelands of war ravaged earth.
Downslave’s metallic soundings initially had me thinking of the Phil Anselmo led Down, but on deeper reflection, maybe more along the lines of Pantera. The vocals, on more than one occasion, made me think of Anselmo’s deep, guttural, swampy blues croon, but the guitars are more metallic, more cutting than Down . . . so, let’s call this a leaner towards the camp of Pantera. Violent and unrelenting, these guys unload their full arsenal of destructive power on this forty-three minute slugfest. The music shifts seamlessly from forearm straining alternate picked, up tempo riffage to the more slowed down, groove oriented body swaying, grinding sludgery. There are no huge dynamic mood swings on Cost of Freedom, but that’s not what these guys are about. Downslave are the kind of band that assails the listener with one mood in mind: Anger. These guys sound pissed off, and though I’m sure they have their reasons, I don’t need to know what they are. I just believe them. A band doesn’t just come out sounding this honest and fired up and not mean it. 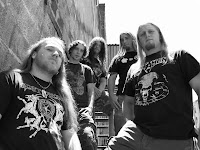 Be prepared. After a two minute musical introduction laced with gun fire, air raid sirens, and screaming bombs from the sky,  Downslave unleash a galloping guitar orgy on “Unnamed” that will have you flying backwards in your chair. The vocals, in Anselmic fashion, croon and grunt and howl about the human sacrifice of warfare and the subsequent psychological effects that our soldiers go through during and post combat. The music is equally as intense as the lyrical content, the drums driving this beasty up and down the mine littered countryside, narrowly avoiding total destruction by inches. The guitar solo is a string bending, flurry of wah’ed out ecstasy, both tasteful and boisterous. The song is fierce and fiery, compassionate and intelligent, and ultimately one of those songs that I can listen to a hundred times over. Walk into the gym . . . play “Unnamed.” Walk into the office to do battle with the accountants . . . play “Unnamed.” Walk through the grocery store with the Mrs. . . . play “Unnamed.”
The title track immediately follows and it’s equally as unrelenting. Fuck. The power that these guys wield is some serious shit! Huge waves of sustained distortion wash over the rumbling of the drummer’s tom assault, and then the chaos ensues. Downslave drop a sweat dripping mid-tempo riff that sparkles through the dinge and despair. Heavy as a box of rocks and just as unwieldy, this gem is all attitude and acts as a sonic beat down. I love the dynamics that they use on this track as the song breaks down in the middle, leaving the brief moments of quiet between explosive charges on music. Then, as the two guitars exchange riffs to bring the song back into its natural gait, you get the sense that these guys have spent a lifetime working, communicating with one another via the power of the groove. Intense song and one that will undoubtedly leave the listener in a lather. 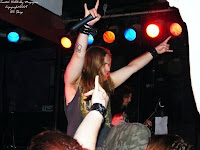 Buckle up, brace yourselves, “Pit Approved” is a rip roarin’, room moving son of a bitch. This is classic thrash metal, the kind of stuff that nods to the old school . . . you know those days when the punks and metalheads performed that dance of destruction in any venue that had the balls to allow this type of music to be played. “Pit Approved” is as high energy and volatile as a song can get. Think Metallica’s “Whiplash,” but modernized and made more relevant. Steamrolling and overpowering, overflowing with that attitude that if you come into the pit with some weak shit, you’re leaving on a stretcher. Go big or go home. Come in strong and don’t be a puss. You fall down, you best pick yerself up quick coz’ there’s a hundred like minded fools stomping their aggression right behind you. Pure fucking violence!
“Hated” is beautiful. Beautiful in that the riffs come from the deepest and darkest place of savagery. Beautiful in that the lyrics and vocals are born from a lifetime of piss poor treatment and angst. Beautiful in that the grooves are so damn infectious that you’ll need a shot of penicillin after you’ve grooved yourself into a sweaty ball of used up energy. The vocals work exceptionally well on this song. They flow real well, the singer hits his marks perfectly, and the passion shines through loud and clear, not forced, not like he’s trying to act like so many of the faux angst mongers out there. This dude is for real. I wanna’ sit back and drink a few beers with this cat to hear the story behind that pain. Fuck . . . that would make the best Behind The Music ever!
Downslave flat out surprised me. I ain’t gonna’ lie. We get inundated with a ton of music and yes, we get jaded to the point where we ask out loud, “Oh great, what’s this all about?” In the case of Cost of Freedom, hands down, this album has blasted its way into my top ten of the year. Maybe it’s the familiar tones of bands like Down or Pantera or whoever that I immediately gravitate towards, but in truth, I think it’s the emotions worn on the shirtsleeve that intrigue me the most, and ultimately won me over. I get the sense that though these guys are young, they’ve felt the pain of life and have figured out how to redirect the aggression into their music. They sound like they’ve been doing this for years. The music is tight and focused, never meandering away from the root of the groove, and it’s performed with youthful exuberance mixed with veteran intensity. I can’t wait to see where these guys go from here. The future should be interesting and I’m eager to watch it and bleed when and where appropriate.  -  Pope
http://www.myspace.com/downslave

This band blew me away when I saw them - they also blew away everyone else on the ticket that night! They are amazing and I'm not easily impressed. Musicianship and tune crafting that makes me feel a glimmer of hope for metal thats been sadly lackly of late. This band answers the call to fill the void left by Pantera - and in my opinion, they do it one notch better!

This band is truely awesome...but, with the loss of Scott Campbell on drums, this CD is false advertisement. The "band" made a decision to remove their double bass drummer with extensive experience and professional contacts after the BIG CD Release...such a shame! I wish the "new band" luck with their new drummer; but not without warning that they will never be the same.

This band has the most amazing sound that has come out of Tennessee in decades. A true 100% southern thrash metal band. That's what thy give and that's what thy expect out of each other 100%. I've been around this band from day one and seen a few changes in the line up. Scott is a awesome drummer, "with extensive experience and professional contacts" as Sara has pointed out, but like the drummer before him he lost focus and forgot an important rule, the band comes first and the BS of your live is second. I've seen these men give up a lot in there lives for the music. You think Metal is the proffered music of Knoxville, Tennessee. Mikey is an exceptional drummer, he fits in perfect. A good ol'boy who can play some MF drums. It wasn't a one day decision to dismiss Scott. Thy had to find the right guy, and Mikey was it. So get out and check out DownSlave where ever you can and earn your "PIT" stamp.

Sara, Yes the band made a decision. A good one. The guy is a good drummer. But was not committed and did not take it seriously. They are much better off. And are a way better band with the new drummer. Shame on you for trying to make the ban llook bad just because your brother got kicked out.

Saw these guys recently and the old drummer is back. They kicked ass! They were cool enough to sign my cd. thanks again!