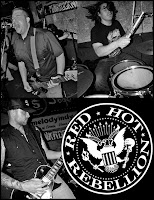 Red Hot Rebellion  -  Built to Rock/For the Benefit of Evil

I love it when a band has a simple purpose, something everyone can easily understand.  Red Hot Rebellion writes music with only one thing in mind, rocking your socks off!  Seriously, the band openly promotes the fact that they want their music to sound like “the soundtrack to a bar fight”.  They set about achieving this goal by utilizing tried and true methods pioneered in decades past.

“Built to Rock” starts off the two song sampler.  This song harkens back to the heyday of boogie rock with its ultra fuzzed out guitar, solid medium-tempo groove, and lyrics devoted to one very special lady.  While this track is solid, the real show begins with the second song, “For the Benefit of Evil”.  Pure rock righteousness bursts forth from this song in every imaginable way.  Once again the fuzzy/heavy guitar tone dominates the proceedings.  The verses are built around a series of choppy riffs, while the choruses revolve around a stop/start mechanic used to great effect.  Towards the end there is the mandatory breakdown leading into a lethal guitar solo to close out the song.  I love the Misfits-like gang vocals in the choruses, and with lyrics like “Devil called me up and said listen here, I got something to tell you son.  It’s better to die behind the guitar than die behind the gun” I get goose bumps!  Did I mention that these songs are obtained for free from the band’s website?  Why are you still reading this?  Get clicking! 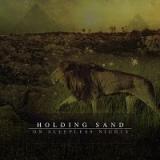 Alright, I will be the first to admit that melodic hardcore is not a genre of music in which I am very well versed.  Some of the bands that are name checked as important to this musical category don’t do anything for me personally.  That being said I am very enthusiastic about this new five song EP from French band Holding Sand.  From the moment I started listening to it, the music grabbed me with a vice-like grip and refused to let go.  It’s a good thing that the EP lasts for just under twenty minutes because when I listen to it, listening is all I am doing.  Nothing else gets accomplished in that span of time, and I can’t afford that on a larger scale.

What makes the music so endearing you ask?  Allow me to explain.  Each and every song here has an extremely satisfying musical crunch thanks to the distorted, downtuned guitars of Matthieu Jacquet and Franck Grison.  Anchoring the guitarists is the rock solid rhythm section of Coralie Fumard on Bass and Pierre Sionneau on drums.  Similar to most singers in this genre Clement Horvath switches from angry growls and anguish filled yelling to clean singing at the drop of a dime.  Unlike some other singers I have been subjected to over time however, I can derive no sense of false emotion or fakery in any of his vocals.  On the contrary they seem entirely genuine, and this adds quite a bit to the overall honesty beaming from the music.

“The Future Belongs to Heartless Whores” acts as a strong opening salvo for what is to come and “Shooting Stars” effectively concludes the EP, but my favorites are the three songs in between.  “On Sleepless Nights” brutalizes from start to finish with whiplash inducing guitar lines and vocal vitriol aplenty.  “Black is the new Black” substantially scales back the tempo for what I would deem more of an introspective number.  This song reminds me of an early composition of the band Cable from their Skyhorse Jams EP, except that “Black is the…” has greater focus and meanders far less.  Finally “What Eyes Betray” throws a curve ball at the listener by devoting the first twenty seconds of the song to a series of distorted sound crashes.  The band then stomps on the accelerator with insistent drumming coupled with an ascending guitar riff and only lets up at the end of the song.  Fantastic! 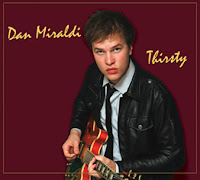 You would be excused for thinking that the three songs on this EP were released years ago.  That isn’t to say that the songs sound dated.  They certainly do not.  Actually, the production on the album is crisp and crystal clear.  No, the songs just sound as if they were written by someone who has not been influenced by any artist or group after the era of The Rolling Stones and The Beatles.  And you know what?  That is a great thing!  All three songs greet the listener like a breath of fresh air with their utter lack of pretense and posturing.

“The Holy Roller Stone Revival” kicks the tires and lights the fires immediately with a strong driving beat and vocals reminiscent of a powerful preacher lecturing his flock.  Although I doubt that young Mr. Miraldi has in fact “…seen it all” as the lyrics suggest, he has certainly seen enough to create this rollicking song, with the call to join this particular revival too infectious to ignore.  “Lucinda” comes next and offers a very pretty folksy ballad for your listening pleasure.  The vocals are hauntingly clear and without any semblance of a whine.  Very endearing.  “Tease” brings the processional to an end with obvious nods to early upbeat Beatles material after a brief keyboard introduction.  The bottom line is that anyone looking for songs that will bring cheer and happiness to their day should check these out, post haste.  Just don’t blame me when all three come unbidden into your head and you’re forced to sing along.

http://www.myspace.com/danmiraldi (all songs streaming there)