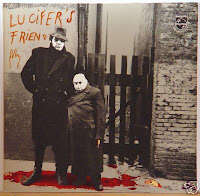 What was going on in Germany in the early 70’s that they were able to produce such kick ass world class heavy rock? And what’s wrong with the world that the music of Lucifer’s Friend and Night Sun are not being played on your local classic rock radio station right now? The debut albums from both of these bands are required listening for all fans of the mid-tempo hard n heavy realm.

The debut album from Lucifer’s Friend was first unleashed in 1970 and the opening song “Ride The Sky” is something everyone needs to hear. Released the same year as Led Zeppelin III, the song was accused of ripping off “Immigrant Song” but it turns out “Ride The Sky” came first. Take a listen for yourself and see if the opening fanfare played on French horn sounds similar to Robert Plant’s wailing vocals. Zep has been known to pinch some riffs here and there, but this might just be a weird co-incidence. But you never know. It wouldn’t surprise me if Jimmy Page was intrigued by a band named Lucifer’s Friend given his interest in the occult.

Even though Lucifer’s Friend were a German band, they were fronted by British born belter John Lawton. His high pitched voice soars above the heavy, gloomy music perfectly. I must admit the first few times I listened to this his voice reminded me a bit of Mickey Thomas but luckily there are no cheesy songs like “Fooled Around & Fell In Love” or “Jane.” The heavy organ sound makes for immediate comparisons to Deep Purple and Uriah Heep, but Lucifer’s Friend are probably closer to early Atomic Rooster in their blend of doomy guitar/organ interplay and they rarely venture into full on Emerson, Lake & Palmer prog.

All 8 songs on the original album are great. There’s everything from creepy slow ones like “Keep Goin,” mid tempo groovers like “Toxic Shadows” and faster ones like their theme song “Lucifer’s Friend. The latest edition of the CD comes with 5 bonus tracks that vary quite a bit. “Horla” is from 1970 and fits in perfectly with the album. However, there are some songs from 1973 that are pretty lame pop-rock junk like “Our World Is A Rock N Roll Band” with horrible synths and David Cassidy style vocals. Just goes to show what happens when the record company demands a hit! 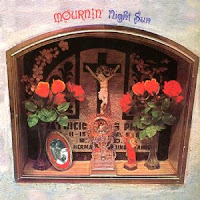 Lucifer’s Friend went on to make a few more albums but changed their style quite a bit from the debut, which is where Night Sun comes in. Another German band with a high pitched screamer and pounding organist, this sounds like it should have been the second album from Lucifer’s Friend. Their debut album Mournin’ from 1972 has been described as Lucifer’s Cousin or Lucifer’s Friend That Came With The Other Guy.

Album opener “Plastic Shotgun” is an insanely complex song that will make your head spin. Night Sun has a bit more ELP in their sound than Lucifer’s Friend but are too heavy to be a full on prog rock band. “Got A Bone Of My Own” and “Slush Pan Man” are dead ringers for Death Walks Behind You-era Atomic Rooster outtakes. “Blind” has a nice jazzy groove to it similar to Deep Purple’s “Lazy” with some nice guitar work. Fast ones like “Crazy Woman” and “Nightmare” use the “Speed King” template to excellent effect.

Sadly, both of these albums are out of print but used copies can be found in all the usual places. Both of these albums belong on your stereo if you love Captain Beyond, The Groundhogs, Hard Stuff and all of the bands already mentioned. It might cost you, but heavy rock this good is hard to find.  -- Woody