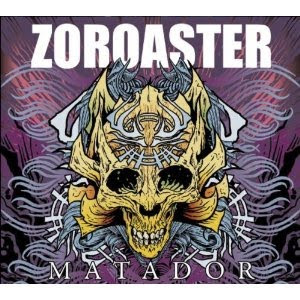 I had a heard a little of Zoroaster in passing and always liked what I heard but was never totally knocked out. Sludgy, heavy, droney. There’s tons of this kinda stuff around these days, but the early reviews of their new one (and 3rd full length) Matador sounded like it was right up my alley. More rock and psych is what I was hoping for and now I got it. Zoroaster are known as Atlanta’s loudest band. Based on the live reports I’ve heard, they’re louder than Mastodon and the Atlanta Rhythm Section combined. Photos of them show walls of amps, flaming drums, smoke and 3 really unpleasant looking rebels wailing away.

Matador features 9 songs in 45 minutes and takes you on a trip through all the elements of the heaviest shit out there. Opening song “D.N.R.” starts off thrashy before morphing into some OM-ish drones. Will Fiore’s guitar is crushingly heavy but with lots of definition (Orange Thunderverb amps are awesome!). Very tall bassist Brent Anderson has a towering tone and drummer Dan Scanlan really pounds those tubs hard. It’s gotta be murder for him to be heard in their practice space with all those amps. Will and Brent share vocal duties.

“Ancient Ones” has a rocking Black Sabbath groove with some hoarse vocals that are almost black metalish in places. There’s even a tambourine in the mix. “Odyssey” is indeed a tripped out journey. Great groove and dynamics. “Trident” has some great guitar solos that remind me of the great Helios Creed. My favorite song is probably “Firewater.” It’s really tripped out. The bass and drums lay down a pretty speedy groove while all sorts of insane guitar noise is detonated on top of it. Longer songs like “Old World” and “Matador” both clock in around 7 minutes and don’t wear out their welcome. “Black Hole” is one of the faster songs and is followed up with the much slower “Odyssey II.”

Matador flows really well as an album. Play it start to finish for a very satisfying listen. The other Zoroaster music I’ve heard has had very murky production and really long songs. I’m glad they cleaned up the sound and cut some of the fat off the songs. Matador reminds me of another favorite album of 2010, Ufomammut’s Eve. Both these bands combine the heaviest of the heavy with acidic Hawkwind and Pink Floyd space jams.

Zoroaster just wrapped up a tour with Black Tusk and Dark Castle but are hitting the road again in Zeptember with Nachtmystium and The Atlas Moth. Everyone says the Zoroaster live experience is an all out assault on the senses with bright lights and a huge sound. --Woody