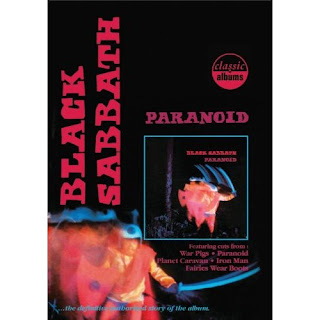 Oh baby! I couldn’t wait to get my greasy mittens on this one. I love these Classic Album DVD’s and will gladly watch one even when it’s a band I’m not crazy about, but when it’s one of my all time favorites – look out! This is Black Sabbath were talking about and one of the greatest heavy metal albums of all time, 1970’s Paranoid.

Longtime Sabbath freaks may find the beginning a bit dull, as it tells the story of how the band came together, how guitarist Tony Iommi lost the tips of his fingers in an accident, how they came up with the band name, etc, etc. We may know all this stuff already, but there are future generations and new converts to consider. Once we get into the main part of the program it’s a rock fan’s delight. You get to hear straight from Ozzy, Tony, Geezer and Bill how they came up with the songs and the inside stories behind the lyrics while recording engineer Tom Allom gives us some technical info. It’s incredible to think that all 4 original members are still with us to tell the tale. It’s been documented that the song “War Pigs” was originally called "Walpurgis" and contained some stronger Satanic themed lyrics, but I bet you didn’t know that after hearing one of Tony’s huge riffs Ozzy said it sounded like an “Iron Bloke.”

Hearing the band members talk about the songwriting process is fascinating. They all agree that each member was absolutely essential. Tony would usually kick things off with a riff but then Geezer and Bill might take it in another direction. It was up to Ozzy to try and find holes in the music to find a place for the vocals and come up with a melody line on the spot. While Geezer wrote most of the lyrics, Ozzy had to bring them to life.

As great as it is to get the inside scoop on classics like “Paranoid,” “Hand Of Doom,” and “Fairies Wear Boots” you also get some outside perspective from Henry Rollins, a long time Sabbath fanatic if there ever was one. As mentioned before, engineer Tom Allom offers lots of great information. I had the great pleasure of working with Mr. Allom about 15 years ago and got to hear many of these stories directly from him. He confirms that the entire album was recorded and mixed in less than a week. The band was so tight that hardly any of the songs required more than 3 takes and very few overdubs. Back then that was normal, but is completely unheard of now.

The main program is about 45 minutes and then there’s about the same amount of bonus material. If the main program doesn’t offer you too many insights, then the other footage will. You get to watch Tony demonstrate many of the riffs, as well as get to see Geezer show how he would bend his bass strings to make Tony’s riff sound even bigger. Bill talks about his love of swing era drummers and gives free lessons behind the kit. There’s even an interview with a Warner Brothers Records executive talking about how they would sell boat loads of Sabbath records in America and never get any returns from retailers.

Do yourself a favor – if you have ANY interest in heavy metal or hard rock get this as soon as you can. Get some party supplies and have the Classic Album DVD’s of Machine Head, Ace Of Spades and British Steel handy and have yourself a great night.  -- Woody