August 02, 2010
In recent weeks, I’ve been holed up in the Ripple Offices concentrating on getting this label up, running, re-charged so that it could run some more, etc. Y’know, business as usual. And, like any record label/music PR firm/music review blog/music commentary radio show office will, there’s music going on. I haven’t really wanted to listen to too much new stuff because when I’m entrenched in detail oriented work or acts of mundanity (yes, I made up my own word,) I like to have material that I’m familiar with., stuff that I can unconsciously sing or hum to. But, that kinda’ changed when I discovered a couple of instrumental albums. I found that while the music was unfamiliar and went all over the place, it didn’t inhibit my flow of energy. I like that. Then I began to take note of the musical intricacies nestled within the flurry of notes, and I that I wasn’t singing with my voice, but rather with my hands. Just as the musicians within these submissions were doing.
Take a gander with your eyes and ears to these two releases, and hopefully you’ll find that little something that will inject you with some additional energy. 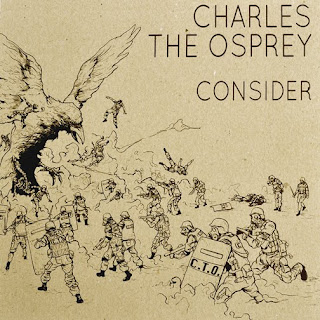 Charles The Osprey – Consider
This outfit is a duo, and frankly, I’ve never heard a two-piece create so much intricate sound. The duo of Rafael Ohli on guitars and Derek Lancioni on drums seem to speak in waves of sound as the weave their musical performances between each other like two birds in flight, like two dancers across a ballroom floor. The music is kind of post-punk-y, post-rock-y, post-harcore-y, and at first glance, may appear to be senseless showmanship, but that’s where folks would have the completely wrong idea of what these guys are doing. These songs have structure, albeit, a loose one. The tightness of the musicians’ performances are enthralling and, often times, breathtaking. Ohli’s fingers pull off impossible chord changes, scale runs, and technical feats  . . . all of it leaving my finger joints a little more sore than when I woke up. Lancioni’s drum work is as expressive as the guitar work . . . filling the songs with huge tom patterns, incorporating subtle cymbal crashes, and propelling the songs into some of the oddest time signatures imaginable. The two musicians then meet somewhere in the middle for these hopped up musical conversations and magic is created.
Listen to a song like “Hornets Don’t Have To Feint” and marvel at how these guys can be so damned technically proficient and still craft a compelling song. The song is filled with amazing guitar acrobatics . . . scales played at stunning speed, but executed with clarity. In the background, loosely holidng things together, Lancioni fires of rolls with accented snare crashes to compliment the work that Ohli is doing, and then things get crazy and off time. These guys say more with their hands than a gymnasium filled with debate teams do with their mouths. The composition of this song is immaculate. One part loose and feeling like they just sat down and jammed this out in one sitting, the other part of it feels like they must have stood in front of chalk board, plotting out the parts for eons. Heavily structured music with a loose under current.
And while songs like “Conversations With The Deacon, Vol. I” are mind-boggling feats of musicianship, the song that absolutely floored me was “The Frontal Lobe A-Go-Go.” What a fucking master work! The clean guitar tones sound like they’re being pinched within their own groove and the way that Lancioni drops in, the whole tone of the song becomes this jazzy little epic. While Ohli is still holding down the rhythm, Lancioni is able to go ape shit, lobbing huge bursts of expression with the aid of his kit. In time, a dubbed in heavier distorted guitar creeps into the mix, adding an ominous wave of tension and intrigue. As the song cruises along its path, the duo holds back the barrage of notes and lets the song breath by adding longer pauses between the notes. But when they do get back to their chaotic nature, they don’t overdo it . . . they add just enough nuance and cacophony to create a dynamic shift in mood.
If you like progressive music and don’t’ mind a thrill ride when it comes to individual musical performances, then Charles The Osprey is not going to let you down on the first listen . . . or a one thousandth listen. 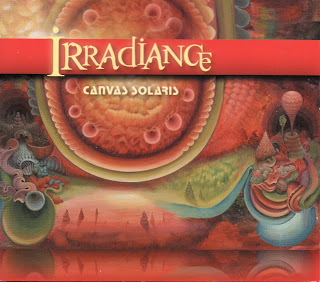 Canvas Solaris – Irradiance
Much like East of the Wall did a few years back with their stellar album Farmer’s Almanac, Canvas Solaris approach their post-metallic sounds with a complete disregard for the vocal element. Irradiate is filled with many an epic moment, constantly shifting the focus between the individual performance and the song composition, ultimately creating a piece of nine song masterpiece. The music, like most progressive music, utilizes odd time signatures, and what I’m finding most intriguing about Canvas Solaris is that they have an uncanny ability to create huge moments of mood. When these guys are all playing in seemingly different directions, it’s like walking through a dense forest, the senses are working overtime to process all that surrounds us, at times feelings claustrophobic and disoriented . . . and then when the band drops down to a more standard tempo and allow more space between the notes, it’s like walking out of that forest, into a wide open plain where the world is open for us to delight in its vastness.
“Conveyance of Flux” is a beautiful epic of a tune. Crafted in what sounds like a linear fashion, the song feels like it’s telling a story. I love how the track opens with some distorted synth-bass tones and then the rest of the band joins in with their avant jazzy attack, scale runs at a million miles an hour and drums snapping, smashing, and crashing like a wall full of china exploding on a hardwood floor. Then, to create nuance and extra dynamics, the band drop down and open up, sustaining notes and tones . . . creating space for the listener to breathe in the delights of the various sounds. This song has a lot of metal elements and, at times, reminds me of some of the more progressive moments of Iron Maiden and the gutter grit of Metallica. Note the exceptional bass work around the 3:34 mark. It doesn’t start off all that fancy, but after the first couple of measures, the bassist works some magical extra notes into the run and makes that portion of the song pop. Then, of course, there’s the understated guitar work with its volume swells and moody tones. I love that Canvas Solaris took us somewhere a little different on this song and didn’t simply dazzle us for the sake of dazzling.
“The Horizons Feast On Stars” is another fabulous journey into the mentally challenging areas of progressive music. Again, the band brings more mood and elements of emotional expression than most prog-music, and we as listeners don’t have to over think what the band is doing. This is partially due to them breaking up the din of multi-note flurries with ambient moments and subtle melodies. The three minute mark of this track is another high mark to listen for as this group of musicians executes highly proficient runs of music. “Glacier” follows it up with a high speed thrill ride that kind of paints images of riding on a snowmobile across an icy terrain, weaving in and out of frosty canyons, daring death to sweep us away. Then, there’s “Soliton,” a song that has huge jazzy elements, a quasi-Latin polyrhythm vibe, and some sexy bass tones. Amazing execution and an album that simply gets better and better with every listen! --Pope JTE