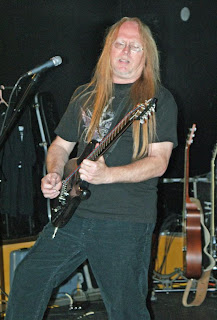 Revered by many, but unknown by most, Poobah's Jim Gustafson is a guitar player who's style has morphed over the years. With the re-issue of the classic 1972 Poobah debut, Let Me In, looming in the very near future, we thought it might be nice to sit down with Jim Gustafson, the grand Poobah himself, and pick his brain a little on his approach to tackling the chores of being the band's sole six-string slinger for nearly forty years.
What made you decide to pursue playing guitar?

I saw the Beatles on TV, at a young age, and my sister and her hot friends were going crazy over them. Right then I said to myself, I want to play guitar.
How quickly did you pick up playing the guitar? Did guitar playing come naturally, or was there a struggle involved?
I learned fairly quickly, as I really was drawn to it. I would say I had some natural ability, and was able to learn things at a very quick pace. It also helped, that where I grew up, there were some excellent players I would go see live, often. You can learn so much from watching others. I do not recall any difficulty, as I would gladly grab the guitar and go for it, every day. I still love to play, and grab a guitar most every day. This really helps in the songwriting department, as ideas come when you are just messing around.
What was the first guitar you owned?
My first guitar was very hard to play. It was a cheap, unnamed brand of acoustic, with strings set far from the neck, making it hard to play. My grandmother watched me try to play it anyway, and often. After about 4 weeks, she then purchased me a really nice National red electric, and it was a totally easy guitar to play, making my learning move ahead quickly. I started out taking jazz lessons as a sight reader, and then also took a few lessons from a rock guitarist, which really sent me up the path I wanted to be on. I wanted to be able to get up on stage and rock. 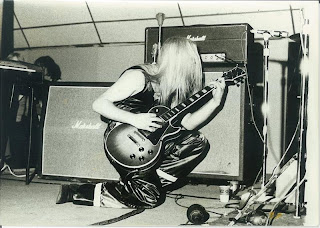 What kind of gear do you use? Guitar? Amp? Effects?
I have owned close to 35 guitars, but now I prefer, Carvin, Jackson, Hamer, Peavey electrics, and Martin, and Ovation acoustic guitars. I usually use a Carvin H-2  24 fret guitar live, and in the studio. There are more brands I am interested in, but the ones I am using are good to play live and record with. I own 3 Marshall amps, a Fender, Peavey, and even an Esteban amp. On stage I prefer newer Marshall 4 channel amps, but I also love my 1974 Marshall all tube 50 watt head, and Marshall 4x12 cabinets with Celestion 75 watt speakers.  I own lots of effects pedals, and use many of them to achieve some wild sounds. Morley wah pedals and volume pedals are great, and I like Dunlop tremolo, DOD flanger, Line 6 echo with looping, Boss octave divider, Tech 21 compressor/distortion, Zoom multi effects and a few others. I like to play some complicated guitar riffs, and then add some flavor with effects, here and there. My newer Marshall has effects built in, for even more flavors of sound.
Do you play in standard tuning or do you use an alternate tuning? If so, why?
In recent years, I use alternate tuning, to have a bit heavier tone, tuning down a half step. On earlier Poobah albums I was in standard tuning. I like the sound of either, depending on what type of project I will be playing on.
What piece of gear can’t you live without? What’s your “secret” weapon?
My secret weapon is my ears and hands. I feel  that I can play most any guitar/amp setup , and get a pretty decent sound, as long as the gear is working properly. In fact, I love to play lots of different guitars/amps, when I can. It always gives me perspective on what someone else thought was a good setup. There is so much to learn, and so little time. 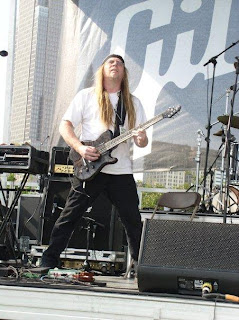 Who are your primary influences? Guitarists, musicians?
For me, the Beatles, Stones, Yardbirds, Jethro Tull, Black Sabbath, Deep Purple, James Gang, King Crimson, were early influences, and then when I discovered many unusual players, meaning far from the style of the radio stars. I was and still am fond of listening to jazz, new age, and lots of technically challenging rock. Some players I like are Michael Hedges, Phil Keaggy, Steve Morse, John McLaughlin, Allan Holdsworth, Steve Vai, Joe Satriani, and many others. So much great music to absorb. Lots of great unknown players I like, too.
When performing solos, are you aware of where you’re going or are playing purely by mood and feel?
After playing for many years, you can almost map out where you are going in your head, and hear the changes that signify a different key, or tone center. I also love to improvise, which changes the music a lot. I try to capture the feel and mood of the recording, and then make it more fun for myself, by improvising many parts on the fly. Some songs call for a close to the recorded part, and if it is a signature section, then you should play it as close to the record as possible, for the audience who wants to hear it that way.
What words of wisdom do you have for young (and old) guitar players who are just getting started?
There are so many tools out there these days for guitarists. You can learn at an incredible rate, if you have the passion. Videos, Youtube, books, all will take you to the next level fairly quickly, if you are willing to put in the practice time. If I could give advice, it would be to try to find your own sound. If you are the best at covering someone else, it may not give you your own voice. There’s no shame in being a cover artist, and probably will get you more work. However, if you want to be remembered for your music, you should try to write good songs, and strive to have your own sound and style.

Buy Let Me In here: Let Me In

Nice one. Jim is a smokin' guitarist with killer tone.

Well,I know one thing for sure,everytime I go to a Poobah show I have a Great time as you just never know what Jim is going to pull off next,maybe thowing Cow poop into the audiance...:)