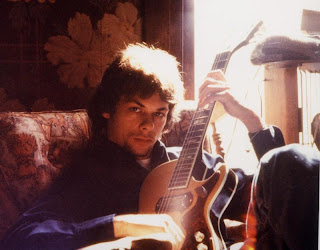 With his guitar heroics on full display on the latest JPT Scare Band album, Acid Blues is the White Man's Burden, we thought that is would be a good idea to catch up with legendary guitarist/vocalist Terry Swope. Throughout the album, Swope's plays the guitar like normal people use their voices in conversation. One minute, subdued and docile, laced with melancholy, then that voice becomes more impassioned, a little louder, as if Swope is becoming more animated and excited about the topic of discussion. One thing is for certain, Terry Swope is a six string talent that has been lurking in the shadows for far too long. Jamming with JPT Scare Band since the early '70's, Terry has been hailed as one of the most unheralded guitarists in the world, Swope is often compared to Hendrix, Page, and Clapton in terms of his fret fireworks.

Take a look at what he has to say.
What made you decide to pursue playing guitar?

Feelings of pleasure and belonging. Music in general and the guitar in particular felt good to me. It felt good to hold the instrument, to feel connected to something. It felt good to slowly gain knowledge and get some positive attention for the effort. Socially it was satisfying to literally have a group of peers to share and learn with.


How quickly did you pick up playing the guitar? Did guitar playing come naturally, or was there a struggle involved?

I picked up the basic chords and strumming techniques fairly quickly. I loved to play and it was not uncommon to spend five to six hours every day practicing. Some days I'd play seven to nine hours. Playing came naturally to me. I found I could pick out parts to songs and learn them. It was also a struggle. I would become frustrated by my inability to get my hands to reproduce what I heard in my head. That struggle continues to this day. 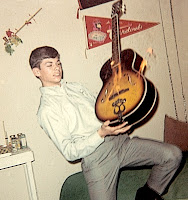 What was the first guitar you owned?

It was an F-hole acoustic guitar that I bought in the record department of the Katz drugstore for $12. I don't remember the brand. Moments after this photo was taken I smashed the guitar against a telephone pole in the backyard.

What kind of gear do you use? Guitar? Amp? Effects?

Do you play in standard tuning or do you use an alternate tuning? If so, why?

I'm in standard tuning 99.9% of the time. I experimented early on with a variety of tunings but never stuck with them.

What piece of gear can't you live without? What''s your "secret" weapon?

If I could only have one effect it would be delay. An Echoplex would be the favored type. You can create
spaces, rhythms, layers and even harmonies. Truly the most versatile effect. If I told you what my secret weapon was it wouldn't be a secret anymore. Seriously I don't like to think of weapons when
I think of music. But I will say this - a great compressor gives every guitar a chance to get lucky. 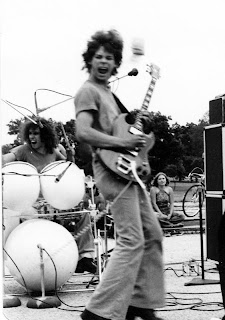 When performing solos, are you aware of where you're going or are you playing purely by mood and feel?

That depends on many different factors. If I'm working on somebody's project I'm going to be looking to please them. If I'm out gigging and covering other people's tunes I want to be in the same ballpark stylistically.

Left to my own devices anything is bound to happen. Music, and specifically the guitar, lends itself to all forms of mood and their communication. Or as Dr Karl Paulnack puts it, "Music allows us to move around those big invisible pieces of ourselves and rearrange our insides so that we can express what we feel even when we can't talk about it."

How has working with Paul (bass) and Jeff (drums) helped your playing? What effect has their abilities as musicians helped your development as a guitarist?


Probably the best thing about the Scareband is its lack of expectation. Throughout my career I've been involved in bands that were focused outward, on making money and being something customers wanted to hear. JPT is pretty much the opposite of that. It's all about what we want. Working with
Paul & Jeff is really not work. We're just great friends into banging out whatever pops into our heads. The vibe is pretty informal and open-ended when the tape starts rolling. In other words I'm free to play anything I want. Jeff & Paul are very supportive, generous musicians who just happen to love playing in the same cosmic sludge pit as me.


What words of wisdom do you have for young (and old) guitar players who are just getting started?

Number one - enjoy yourself. If you can do that then you're a success. Beyond that learn as much as you can and create as much as you can. As far as the instrument goes get something you can play. It does not matter early on what your guitar might look like or might sound like. All that really matters is that you can put your hands on it and it feels good.

You can hear the magic of Terry's guitar playing on the latest JPT Scare Band album, "Acid Blues is the White Man's Burden."