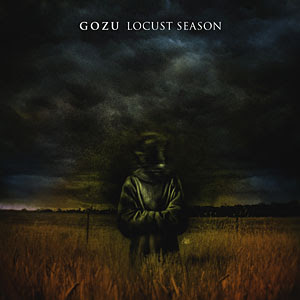 So it turns out Gozu are named after a Japanese movie and not the character on the Flintstones. That was The Great Gazoo, but either way they got my attention. But what really got my attention was that drummer Barry Spillberg was in the mighty Wargasm from Boston. Man, I loved that band! Their first album was called Why Play Around and came out in 1988. A dude I knew who worked for their label (Profile Records) gave me an advance tape of it and I played the shit out of it. That tape is long gone but Locust Season is making up for it big time.

“Meth Cowboy” is a great album opener with a great title. Heavy but modern with a crushing 2 guitar assault from Marc Gaffney and Doug Sherman that doesn’t drown out the bass of Jay Cannava. Barry is still ripping it up on drums. Take a look at these guys. They’re not exactly youngsters but they are pounding the world like a battering ram. Marc also handles the vocals and has a powerful voice somewhere between Chris Cornell and Marc Bolan. If this was 1988 and Gozu came onstage blasting “Mr. Riddle” opening for Zoetrope or Nuclear Assault there would be an instant pit. It’s not really metal but it’s still hard as hell and headbanging inducing. And there’s profanity in the lyrics! Always a nice bonus.

“Rise Up” also includes some good use of four letter words with a heavy Clutch via Hendrix stomp. There’s a totally scorching axe solo that sounds like Eddie Van Halen tackling Jimi’s “Who Knows.” If modern rock radio still existed they would be all over “Reagle Beagle.” This one would sound great on the radio flying down the highway and have everyone singing along on the falsetto “whoah aaaa woah” parts before the no nonsense boogie kicks back in.

Over all, Locust Season is a very solid and satisfying listen. None of the 9 songs are weak and it’s about 41 minutes – perfect length for a good album. Lots of variety so it doesn’t get boring and will appeal to just about anyone who likes heavy rock. Gozu is part of a really good breed of current Boston bands like Cortez, Roadsaw, Cult 45, Black Thai and the incredible Scrooges that makes up for past transgressions like Til Tuesday, Think Tree and SSD.

the_sandman said…
Will have to check this out. Wargasm was one of my favorite bands back in the day. Got to see them right after an Iron Maiden show in Providence back then. What a night...
August 5, 2010 at 1:24 PM