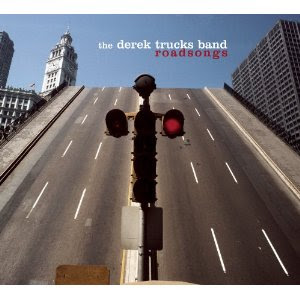 He was a guitar prodigy at the age of 9. By the time he was 12 he was sitting in with Buddy Guy and touring with the Allman Brothers (it helps when your uncle is Butch Trucks, the drummer for the band). He founded his own band when he was fifteen years old, By the time he was twenty he had played with Bob Dylan, Stephen Stills and Joe Walsh. At the age of 22 he married guitarist and vocalist Susan Tedeschi. By his 24th birthday Rolling Stone ranked him 81st on its 2003 list of "The 100 Greatest Guitarists of All Time." He was the youngest person on the list. At the age of 27 he toured and recorded with guitar god Eric Clapton. When he turned 30 his band released the album "Already Free" which debuted at #19 on the Billboard Top 200 Chart, #1 on the Internet chart, #4 on the Rock chart and #1 on the Blues chart. To paraphrase a beer commercial - He's the "Most Interesting Slide Guitar Player In The World."

The song choices are fantastic. The band is tight and each track accentuates the "Most Interesting Slide Guitar Player In The World's" chops. The Allman Brothers' influence can be heard on every track. Trucks regularly produces slide guitar music that is on par with one of the greatest slide guitarist the world has known - the late Duane Allman. The Derek Trucks Band's sound is a mash-up of the Allman Brothers sound with that of the Eric Clapton of Derek and the Dominoes era.   Although Derek Trucks can, and does, play some fingerstyle guitar, this live album is about his slide guitar acumen. It is southern slide guitar bluesrock at its best with a dash of horns added for flavor.

The recording venue for this live album was intimate. According to The Park West website "Park West can hold up to 900 people for receptions and can comfortably seat groups of 100 to 700." It is this intimacy that seems to inspire the band throughout the album. The audience is awestruck, appreciative, but mixed down to be unintrusive. The recording is impeccably mastered by Dave McNair. McNair is known for mastering recordings by Stevie Ray Vaughan, Los Lobos, Bruce Springsteen, Willie Nelson, Miles Davis, Angelique Kidjo, and Kelly Willis.

I don't alway listen to new southern bluesrock slide guitar, but when I do, I choose the Derek Trucks Band "roadsongs." Stay thirsty my friends!