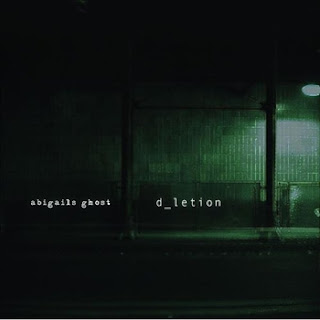 Abigail’s Ghost should have been formed a generation ago, following hard on the heels of noisemeisters like Nine Inch Nails and Curve, but there is a gap of 12 or 13 years before the guitar and powerhouse drumming sound of Abigail's Ghost came along as the natural followup. The bastard stepchildren of King Crimson’s love for unusual chord changes but with a love for the ‘90’s noise, the make a noble effort to combine both.

Abigail’s Ghost second album, d_letion, is a sonic battering ram. Expertly mixed the band turns in a killer opening track that lays down their intentions, with a guitar fuzz that morphs into a hard riffing song about an obsession that might be love or might be hate. Does it matter at a certain point? You can try to downplay me/But I’ll never go away/I’m getting close to breaking through/In spite of what you say/It’d be best to recognize/That I’m not afraid to put you on display  The break moving into a sledgehammer of guitars with deliciously atonal solo from the Berkelee Graduate Lead guitarist Joshua Theriot.

Black lace wears its breathy sexuality on its sleeve. The New Orleans based Theriot sings about the rich girl that we’ve all seen: Prada boots and prescription pills/Born and raised in the Hollywood hills/She’s daddy’s little girl/Not a care in the world/With a trust fund paying the bills. But it’s the swirling break that catapults the song from its echoing arpeggios onto the edge of a dangerous cliff. "Sneak Peek" takes much the same approach, a beautiful lipstick tinged love letter from the stalker to the stalked. But, smartly, after bringing the hammer down on so many songs, "Sneak Peek" keeps its tension, never finding its sonic orgasm.

"Romantique Life" is my favorite track, the band, which has members living in two different cities, makes good use of sonic space, pounding the guitar intro into our brains before choking it off and using a moving, dancing bass line under the lyrics: Take a trip inside my head/Taste the fruit that makes me dead/A simple drug is a simple fix/And an amateur way for you to get your kicks. When the chorus finally comes in, the guitar returns, with a complicated riff out Living Colour’s impossible-to-play "babigails ghost". The echo drenched solos stretches from "Bridge of Sighs" to "Cult of Personality."

"Cinder Tin" combines the beauty of the velvet glove that Abigail’s Ghost loves to wield. The expertly controlled drumming of John Rodrigue and sonic landscape controlled by keyboardist Brett Guillory makes this the soundtrack of a movie that you’ve never seen but know by heart. By the time that Joshua Theriot and rhythm guitarist Randy LeBoeuf kick it in, they’ve highjacked the romantic thriller into Terminator-land with Theriot firing off a precise flurry of notes on a high speed solo.

"Gemini Man" makes some deeper statements about male identity that would seem out of place on an album like this, but they show Theriot and LeBoeuf digging a little deeper than the Bourbon Street beads. He’s someone to question/Who he wants to be/Decent family man/Or an absentee/All these lives put on a shelf/Compromise the one he’s made himself.

"Easy A" follows the album into the realm of unloosened sexuality, the anxious student, offering her self, seducing the teacher, who happens to be female as well. The carnival sideshow of mirror that highjacks the second half of the song may well as be the musical orgasm that was missing from "Sneak Peek". The most telling line of the song is the final one. After the seduction has succeeded, there is a knock at the door.

"Grave Concerns" closes out the album, a guitar player’s love of intertwining lines and notes. One can imagine Abigail’s Ghost Theriot and LeBoeuf figuring out the delicate fingerpicking over beers late at night and creating a beautiful two minute and twenty five second coda to an album of high powered and mood drenched rock.

Abigail’s Ghost second album is a winner and worth playing at high volume for its clarity of recording. Not a note gets missed.