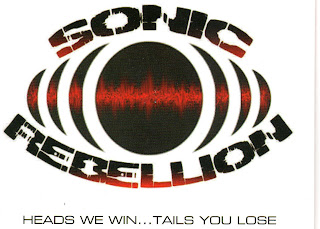 Hey . . . remember when Guns n’ Roses were like, the most dangerous band in the world? Or maybe The Sex Pistols? Or the Stones? There was something inherently fun about that style of music because it was rebellious. It was the kind of music that made one feel that a laid back night at a bar could very easily turn ugly before that first pint was consumed. Sonic Rebellion has captured that attitude on Heads We Win . . . Tails You Lose. These guys play a dirty, sleazy, gritty, night spent in the gutter kind of rock n’ roll, the kind of music that comes more from the heart and pelvis than from the head. It’s the kind of music that makes one want to love violence and to love violently. Rarely dipping below mid-tempo, the songs that make up this album have that great 70’s rock energy and attitude that has endeared the era’s music within the hearts of music fans of all ages.
“Song About Revenge” is flat out rocker that is packed with all that great attitude. Rebellious and highly energetic, the song opens with a gritty guitar riff that reminds me of the sleaziest and heaviest moments of Aerosmith. The drummer is off the hook, hitting the cymbals for peak emphasis, but dude’s playing has a certain smoothness to it . . . kinda’ like drinking the finest samplings of bourbon and getting fucked up in the process. He hits all of his marks with the rage and aggression one might expect from a drummer, yet he does it with style. The guitar work, aside from that ballsy rhythmic riff, is searing and packed with the emotion. The solo work is all attitude, coming across with the perfect amount of confidence, but not cockiness. However, none of it really matters without the vocal performance. That’s where the true attitude shines in all of its rebellious rage. The quality of the voice works in perfection with the attitude, anything softer would come across too tame, anything harder would come across as trying too hard.
“Mad As Hell” kicks off with some nice slide action on the hugely distorted guitars, reminding me of Dr. Feelgood era Motley Crue. Much like “Song About Revenge,” this songs is steeped in attitude and sleaze. Listening to a song of this quality just makes me feel dirty, like I spent a long night drinking with the boys, puking in the back alley, then fighting with an equally intoxicated group of street thugs until the sun comes up or the bodies fall . . . whichever comes first. Yeah, this baby has that kind of attitude! Again, musicianship is key to the songs strength, keeping a standard rock song interesting. Keep an eager ear open for the bass work on this one. This guy is more front and center than on most tracks, firing off runs up and down the neck of his guitar. I wouldn’t say he stays in the pocket on this one, but he does a remarkable job of keeping the groove while throwing in a ton of flourish.
“Make It To Midnite” brings down the house. Upbeat, up tempo, and full of groove, this song got me air drumming behind my desk, behind the wheel of my car, embarrassingly behind the cute chick at the checkout counter of the super market . . . Yeah, it’s one of those kinds of songs. You won’t be able to help yourself as this sucker kicks through the speakers and courses through your being. If you have any sense of excitement and rock n’ roll moxy, “Make It To Midnite” is the song that will infect you and take control of your motor sensory.
“Think It Through” is another awesome jam. So many sounds come screaming out at me. Big time Aerosmith groove, a little Ted Nugent, some of that Buckcherry attitude, even a little Candlebox thing, all of it working to perfection. Again, musicianship. Fuck. The drumming on this track is fantastic. Listen to the little fills and the strength of the cymbal crashes to tom strikes . . . that, friends, is a thing of beauty. The drummer is playing in the context of the song, never doing more than what the song needs to retain its power. I love how this song just is so rich with flavor, mid tempo groovin’ though the first three quarters, and then kicking up the tempo to close out the tune. Balls.
Heads We Win . . . Tails You Lose, but friends, we’re all winners with this beasty beast spinning on the player. If you like good ole blues-based rock n’ roll with a truckload of attitude, Sonic Rebellion is the band that you’ll want to discover. I can’t say that there’s a band song on this album and it will unleash that bad boy inside. Don’t be surprised if you find yourself staying out later than normal, washing a little less, drinking, cussing, fighting more. The music has balls. Hell, it is balls! This is the kind of 70’s rock that should have been released back in the day, and would have sat comfortably next to the era’s greats . . . on pure attitude alone. Outstanding musicianship makes this album interesting in that it doesn’t sound like your standard retro blues rock, it doesn’t sound dated. It’s an immediate recording with just enough of a modern sound to make it relevant for today. I’m gonna’ stop blathering now . . . but only if you all rush out and buy this one.  -  Pope
www.myspace.com/sonicrebellion
www.sonicrebellionrocks.com
Posted by The Ripple Effect at 1:14 AM