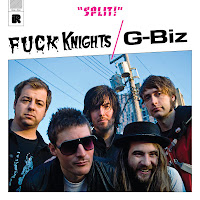 Kinda cheating here adding this one to the Single Life column, but go with me.  It works well here.  First up is the Fuck Knights, about as idiotic and amateurish a band name as you’re ever gonna find.  And no surprise, the Fuck Knights play an intensely sloppy, lo-fi, fuzzed out splatter of garage punk.  Oh, were my expectation set low when I dropped the needle on this spinning licorice pizza.  Then --woah and behold!-- the Fuck Knights blew me and my pretentious judgments right out of the fucking water.  Two cuts here and there’s no delicate way to say this, so I’ll just jump right in.  “i/primitive” is a certified, bonafide, undeniable garage rock classic.  From the intensity of the primitive pounding percussive beginning, with it’s sonic disaster production, spare-muffler-part guitars, and shrieking headhunter vocals.  Dig right into that lost-surf rock guitar solo.  Latch your horse onto that primal groove and beat.  This song is an absolute blast.  Then, just when you think you got it figured out –wham –bam—the Fuck Knights blow your mind with the drum breakdown leading into a post-blues whammy riff.  The song plays out that way, guitars rolling along the Mississippi in an extended garage-blues jam.  Freaking dynamite!

“Teenage Wasteland” recorded live on a portable cassette recorder is another retro-blast of oil stained rock and roll, complete with howling harmony vocals.  The Fuck Knights are the real deal.  Not to be missed for fans of the fuzzed, the scuzzy, and the garage-bred.

G-Biz failed to impress with the side of quasi-haze garage hip hop, shriek and roll.  Not my cup of 10-40.  I’ll just keep the Fuck Knights side on my turntable and wait for their next primitive treat to come my way.

Speaking of garage fuzz, the Cheap Freaks come along right on cue.  Coming from Dublin, the Cheap Freaks add a touch of quasi-psychedelia, a la the 13th Floor Elevators to their sonic attack.  “Caesar the deceiver” tosses some odd guitar touches into the guttural pulp mix and a hefty dose of “Hurly Burly” chops.  1984 rocks with a caveman-pounding-his-mate intensity.  “Nowhere to Go,” revs up the speed-inhalation with a nasty dose of poppers, whiskey and cheap wine. Guitars go in furious circles while the vocals chop through the fuzz.  “Something Wrong,” sounds like an outtake from some 1960’s beach movie on really bad speed and acid.  It’s all enough to give Annette Funicello hives.

Total lo-fi, garage slop noise.  It’s punky.  It’s fuzzed.  Of course it’s from Big Neck Records.  A definite hit for the like minded.  Call me one. 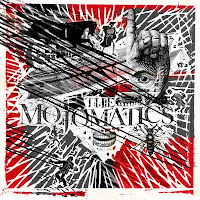 Brandishing a cleaner assault than the Cheap Freaks, Big Neck Records comes right back at cha with this charger of a 7” splatter-fest.  The Mojomatics play it hard and fast and bring some downright dirty harmonica into the mix.  Vocals are definitely a step out of the garage, can actually carry a tune and be heard here.  That’s a plus.  Mainly, this is a speed romp through pounding fields of bluesy garage beauty.  “Heavy Dose of Sympathy,” follows suit, barreling down the road the boys plowed on side A.

A twosome, with The Mojomatics have been tearing it apart for ages. MojoMatt plays guitar, harmonica and vocals, while Davmatic destroys the drums.  It may all seem so simple, but trust me, these cats can rile up quite a ruckus.  They're a truly professional unit.  Don’t think the White Stripes, think the Standells on uppers, the Monks on crank.  Think whatever you want, then buy it. 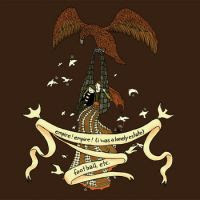 
The value of a split 7” is the opportunity to check out two different bands, offering up their top cuts.  It’s like the previews before a summer blockbuster film.  A taste of what’s to come.  A hint at what you may want to track down.

In that regard, this split succeeds admirably at bring two up-and-coming alt-emo bands to the surface.  Following on the heels of their critically-acclaimed debut full-length, Empire! Empire! Demonstrate why their at the head of the pack of the current roster of emo-revivalists.  Emotive singing will either catch your ear or turn your stomach, but theirs no denying the craft here.  Guitars layer and bleed into each other while the rhythm section creates all sorts of syncopated havoc.  All carefully crafted, expertly put together.  Not necessarily something you’ll hum on your way to work, but at the top of the heap as far as emo goes.  Football, etc. toss their hat into the ring with their expressive ditty, “Fightin’ Phoenix.”  Plowing a similarly fertile field of chiming guitars, huge looping bass and alternating rhythmic and pounding drums, this three piece show they’re no slouches.  Guitarist/singer Lindsay Minton adds a new texture with her languid, lazy vocals.  The whole affair brims with earnestness and warmth, something often missing in the emo world.  Definitely a group to watch.