Running Kind - The Girl For All The World 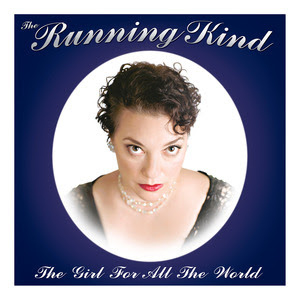 This is shit kicker music. Country western, beer-drinkin’, cowboy-boot clankin’ music. Pull on those Tony Lamas and dust off those Lee Jeans. You’ll be hittin' the honky-tonks, cryin’ in your beer, hee-hawin’ with your horse, and all the time there will be guitars, bass, drums, mandolins, piano, dobro, pedal steel, even a trombone, a-playin’ to entertain you.

You see, these boys can really get down. Leslie can sing a touch or two - so can George, Matt, Neil and Frank. You’ll be two-steppin’, a-waltzin’, box steppin’ and country swingin’.  You will also be wantin’  to listen. So get yourself a cold one.

Matt and Leslie Bosson sang together in the Mt. Greylock Regional High School choir. Later on  they married and came up with this here band, Running Kind, named after an old Merle Haggard tune.  They got George Alexander to break out his Telecaster, Mitsuru “Neil” Fukusawa to bang on the drums and pick a bit of mandolin, Frank San Filippo to thump the stand-up bass and play an electric Fender, and Kevin Smith to tickle the ivories. Darlin' Jim D'Damery adds a bit of dobro to Running Kind’s song “Don’t That Make No Sense” and John Groover McDuffie, from Rita Coolidge’s band, dropped in and played pedal steel on the songs “Two Roads,” “A Okay,” “Seemed Like A Good Idea,” “I Still Love You (Like I Loved You Before),”  “Return of the Grievous Angel,”  and on “Don’t Cry No Tears.”

Here in the US of A country music outsells metal, rap, latin, jazz, new age, classical, Christian and soundtrack music.  It has a long domestic history - it is a true American art form. Generally, it consists of silly lyrics, story-telling and “woe is me” love songs.  The twang-tinged musicianship can be awe-inspiring like a Doc Watson guitar pickin’ instrumental or a Flatt and Scruggs duet.  All these ingredients are combined on Running Kind’s album - The Girl For All The World.

Throughout this collection Running Kind taps into the various sub-genres of country.  The song “Life To Go,” is a George Jones classic about a jailed woman doing a life sentence that tells her tale of woe and remorse.  It is a ballad played in a style reminiscent of Marty Robbins’ hit song “The Chair.”  The album’s title song “The Girl For All The World”  is a story, unusual for country in that it could be interpreted as a lesbian love song, delivered in a mournful style akin to an Emmylou Harris slow ballad.

The next track, “Two Roads,” is the only song on the album written jointly by Matt and Leslie. Acoustic, electric and slide guitars, drums, keyboards and vocals all come together to form an excellent two-steppin’, twangy fandango about separation and reunion.  It is followed by “A Okay” a warm, honky-tonk, love song featuring some stellar slide guitar work.  Leslie’s voice on the track called to mind the vocal style of the late Nicolette Larson.

A bluegrass lilt permeates “Don’t That Make No Sense,” a song about life and how it changes us.  The music, not the words, harken to Mungo Jerry’s 1970’s hit “In The Summertime.”  Running Kind follows “Don’t That Make No Sense” with “Seemed Like A Good Idea,” a comedic ballad, complete with trombone, that is in the tongue in cheek style of Buck Owens.  In fact, it reminded me of Buck’s classic “Pfft, She Was Gone.”

The album slows down for “I Still Love You (Like I Loved You Before)” a “somebody done done somebody wrong” song.  The lyrics are typical country western fare over music that echos the song “Anna (Go With Him),” written by the great Arthur Alexander, but, probably better known from the hit cover version by The Beatles on their 1963 album Please, Please Me.   After “I Still Love You (Like I Loved You Before)”  the band plays “Old Girl,” a blockbuster of a country/folk/rock/alternative crossover tune that has more of a relationship to an Outlaws or Marshall Tucker Band song than it does to traditional country western.  This one could play, and become a hit, on country, rock, alternative and folk radio stations.

The last two songs on the album are covers. Gram Parson’s “Return of the Grievous Angel” is about as country a country ballad as you can get.  Running Kind gives it an even greater yee-haw treatment, and a slightly more upbeat tempo, than Gram Parsons did on his album Grievous Angel.  The song is about coming back to one’s love after time on the road.  The album culminates with a cover of Neil Young’s “Don’t Cry No Tears”  a short ballad about lost love.  It is played in a more polished manner and in a traditional country style rather than in the folk-rock style of Neil Young & Crazy Horse on their album Zuma.

Any old cowpoke worth their boots will tell you that there are two types of shit-kicker music - good and bad.  Partner, this is the good shit.