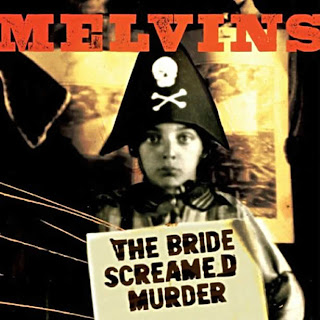 Prior to hearing The Bride Screamed Murder from Melvins, I knew very little about the group. Now, after listening to The Bride Screamed Murder several times back to back to back, I know even less about them. I can say this, though . . . Melvins approach the creation of music unique to their own perspective, a perspective forged from the fires in the bellies of stars in solar systems light years away from what we may perceive as normal. That’s not to say that the music is unlistenable or so avant that it won’t fit into the average persons everyday scheme of minutia, its more akin to working a logic problem where the solution to the puzzle isn’t directly in front of you or obvious. Listening to Melvins made me rethink the way I think about music, challenged my perception of logical sound flow, dared me to push the envelope on what I thought I already knew (or was confused by) in music. This album really should come with a condom . . . the raping that my mind took has me in living in fear on how I will listen to the next album submissions.
“The Water Glass” kicks off with a ballsy, detuned guitar riff . . . all sludge-y and fat, oppressive and overwhelming . . . but it’s not the tonal quality that makes me rethink what I thought I already knew. No . . . no, that would be coming from the odd time signature of the riff and how the flourishes that drums add to the mix. Then, the washes of feedback bathe my ears in waves of septic brilliance, drenching my audio receptors with dense and sticky sound.  All of this happening within the first minute and half before seamlessly shifting into a wild high school marching band tirade of beats and vocal chants. Are you kidding me with this?!?!? In-freaking-sane! Leave it to Melvins to push music to the fringes of reality! The majority of this tune is bereft of any instruments outside of the drums and vocals, yet it remains one of the heaviest tracks that have assaulted my headset in months. What any of this has to do with a water glass is beyond, but I’m okay with that. I like the mystery. It gives me something to come back to during those future listens when I need to have my mind impregnated by fresh ideas. 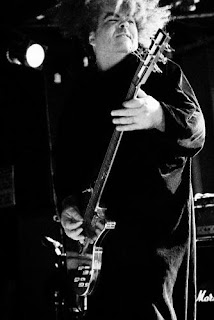 “Evil New War God” is another burly, dense onslaught of sludge toned guitars . . . all playing this massive riff that doesn’t make logical sense to me. Just go with the flow, friends, and the happy conclusion will show itself in time. Listen for the majestic ball crushing riff at the 1:38 mark. Crom! That’s the kind of sludgery that makes me think of St. Vitus. A massive wall of distortion with the capability of deflecting the blast from a nuclear bomb. Note the little flourish of cowbell that these guys mix in there. Awesome! And the vocals . . . again, the sinister quality and paranoid menace permeates from between the flurry of dense notes that barrage the listener. And just to make sure you’re paying attention, the band drop this beast of a tune down to a quasi-jazz beat, cymbal ride, and soft bass drum pattern, before the eerie keyboards add some texture. This entire composition has more in common with jazz than hardcore or punk or metal or whatever genre people lump Melvins in these days. Absolutely spectacular song!
The Bride Screamed Murder is a roller coaster ride for certain, but Melvins have created a thrill ride that’s more than just senseless left turns and corkscrew loops. They’ve composed an epic listen by weaving bizarre nuances in between solid riffs and straight forward ass kicking. “Electric Flower” is one such song as it incorporates a pseudo- surf vibe with a five finger formed fist and a crushing blow to the bridge of the nose. Mixed in all of this chaos, the band still works in portions of magnificent musical performances that highlight the individualism of the musicians at hand. These guys have one of the busiest drummers in all the land. Tons of rolls, little cymbal flourishes, crazy fills that defy reason . . . simply mad! Listen for the guitar solo as it cuts through the din of frenetic chaos with a touch of class. So much going, so much emotion, so much sonic violence . . . and all within three and a half minutes. 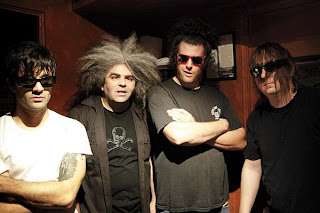 Then, as it should come as no surprise, the band throws in a psychedelic track in “Hospital Up,” filled with weaving and shimmering guitar lines, all of it making me feel like I’m bathing in a lava lamp. The guitar tones aren’t as dense as some of their more straight forward rockers and heavy tunes, but there’s still an imposing vibe fluttering throughout all of the music. The vocals have a gritty crooning quality to them, almost reminding me of moments from Farflung (fantastic psychedelic stoner doom band) and I’m digging how the nuance within the voice conveys an element of manic paranoia. Again, the band work well together to create a song that would fall to pieces if it were performed by any other group of musicians. The individualistic qualities of the players shines on and I go back to my earlier ascertainment that Melvins are more of a jazz band than anything else. Hell . . . listen to the end of the tune when all hell is breaking loose. The keys . . . the bass . . . the horns . . . jazz.
Finally, strap your asses in and assume a crash position. “Inhumanity and Death” is a hundred mile an hour death trip down a winding one lane deer path through oncoming traffic. Don’t look up, just pray that you’ll make it to the bottom of the hill in one piece . . . and alive. The opening bass line and subsequent vocal scream is enough to fill the most seasoned thrill seeker with terror, and as the song careens to its conclusion, there will undoubtedly be soiled shorts amongst the riders. I stink now, but I’m smiling . . . and I’m happy.
Dudes . . . and Dudettes . . . I simply love The Bride Screamed Murder. I can’t tell you if Melvins as a whole area good band, but based on this album alone, I’d call them gods. The musicianship is insane and the musical perspective is refreshing. I don’t suggest diving into this one head first without any previous understanding of what these guys are about. Busy yourself with something on your initial listen to familiarize yourself with the aural assault that is wrapped up in this disc before completely immersing yourself in the music. Once you do go back to giving it your full attention, it won’t hurt as much . . . well, at least, it shouldn’t. The Bride Screamed Murder is a brilliant execution of avant jazz metal that will surprise you every time you listen to it.  -  Pope