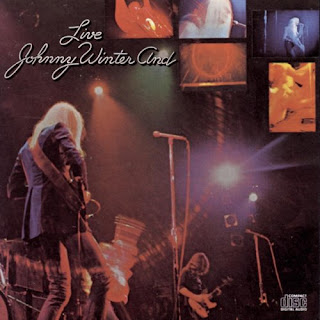 Recorded in late 1970 and released in early 1971, this captures the incredible Johnny Winter and his awesome band at their finest – loud, raw and blazing through a killer set of blues and rock and roll. What a band! Not only do you have Johnny’s fired up guitar, but you have Rick Derringer as his foil. These 2 guys played well together and you can really hear them inspire each other on this album. Randy Jo Hobbs’s bass playing is thoroughly bong rattling. Randy had played with Derringer in the McCoys and later went on to join Montrose.

The album opens with the incredible drumming of Bobby Caldwell (who would help form Captain Beyond in a year or 2) on a blistering version of “Good Morning Little School Girl.” This is some hard-ass boogie rock. Johnny takes the first guitar solo while Rick plays some funky riffs underneath him before switching roles and eventually soloing at the same time. Johnny is mixed in the left channel and Rick is on the right. Check it out on headphones for a lesson on how great musicians complement each other. There’s also great guitar interplay on the slow blues “It’s My Own Fault.” Lots of bands were abusing the blues in the early 70’s but few in the rock world could keep up with the Texas master. The band also blast through some of their favorite rock & roll numbers like “Johnny B. Goode,” the Rolling Stones’ “Jumpin’ Jack Flash” and a very high energy medley of “Great Balls Of Fire/Long Tall Sally/Whole Lotta Shakin’ Goin’ On.”

But the highlight of this (and any Johnny Winter live experience) is the incredible “Mean Town Blues.” Originally recorded on Johnny’s 1968 debut album The Progressive Blues Experiment, this slide guitar masterpiece became his calling card. There are other great live versions from Woodstock (1969) and London’s Royal Albert Hall (1970) but this is by far the best. The band really smokes on this one and use a lot of dynamics. Rick and Johnny play separately and together to make for a very exciting ride. The highlight is when Rick and Randy drop out to let Johnny soar over Bobby’s kick ass drumming.

The CD is currently out of print but you can probably find a used copy of it or the LP pretty easily on ebay. An official biography of Johnny Winter has recently been published titled Raisin' Cain - The Wild and Raucous Story of Johnny Winter that has been getting great reviews. He’s led a pretty intense life and there’s bound to be incredible stories of his work with Muddy Waters, his brother Edgar Winter and Rick Derringer. Play this one loud!

You hit this one right on - this is a classic. Yes, Mean Town Blues is the best version here.