It Crawled from the Basement – The Green Monkey Records Anthology

Music history is littered with eccentrics.  Personalities just --or way-- left of center.  Visionaries who doggedly pursue their own sound or vision despite the mountainous odds against them.  Despite an overwhelming lack of public acceptance.  Often times despite any reasonable sense of financial reward.

And thank God for them!  Often it’s in these way-right-hemisphere thinking individuals that real creativity is borne.  Whether or not it’s appreciated in their lifetime is another matter.

I may have been too late for the first lifetime of Green Monkey Records, but damn it, I’ll wave that monkey flag high and proud now that they’ve resurfaced.

Calling their music post-punk/pre-grunge Seattle, Green Monkey Records was an indy’s indy.  Sprouting from the most humble, inauspicious of beginnings to release scattered handmade cassettes, a toss off of 7” vinyl, some albums and finally some CD’s.  Running from 1983 to 1991, Green Monkey (named after a stuffed animal that label-boss Tom Dyer found in the attic of his grandmother’s house) put out 44 releases of remarkable, sub-basement, glorious pop, punk, psych-folk, and the downright weird.

The most remarkable thing about Green Monkey Records was that either by pure chance or immaculately calculated vision, the quality of music they put out was way above the bar from what you’d expect from their pieced-together, learn-as-we-go-along, record-everything-in-my-basement beginnings.  What could’ve turned into a “novelty” label manufacturing tracks exclusively for the Dr. Demento Show instead became one of the great homes of pre-Sub Pop indy rock.  I’m sure a great deal of luck went into creating the dynamite catalog of Green Monkey releases, but just as much credit has to go to label-boss Tom Dyer, who clearly has a diamond ear for a quality pop band. 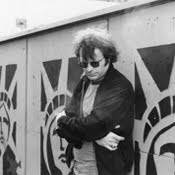 It Crawled from the Basement is the brand new Green Monkey Records anthology.  Having let the label lay dormant but for a few licensing deals, Dyer had recently become rejuvenated, revitalized, re-energized, and the Green Monkey is swinging again.

As any anthology from an underground indy label would be, not all the songs on It Crawled from the Basement will click with every listener.  Nor should they.  That’d defeat the purpose of Green Monkey which was to explore the wide range of the indy scene developing in Seattle in the post-punk years.   Some good, some not so good, all unique and very original.

Putting this disc on for the first time, I was all ready to dismiss it.  I’m not a fan of quirk rock.  Never found the Dr. Demento Show all that interesting, and I like solid chops in my pop, not weird noises and sounds coming from human orifices.  Imagine my surprise when I found myself not only going back time and time again to the 2-disc anthology, but suddenly finding myself on ebay bidding outrageous $$$ to buy up any Green Monkey vinyl I could find.  I was hooked.  Through some insidious, devious act of mental subterfuge, I’d become a Green Monkey furry beast!  (As I wrote this, I just found and bought two Mad Mad Nomad 7" singles off ebay.)

Too many songs (47 of em) on this anthology to go through them all in this review but the highlights are such standouts they have to be mentioned. 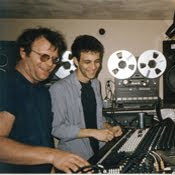 Al Bloch delivers a powerful, stripped down, fuzz guitar-and-organ, garage pop lament to teenage angst, “Hangin Around,”  that is so catchy it’s been outlawed in several countries, then rumbles back with a rollicking, post-sixties ode to unrequited love, “Falling Star.”    Mr. Epp & the Calculations, featuring a pre-Mudhoney Mark Arm, turn in a teenage slacker anthem “Out of Control” that rivals early Suicidal Tendencies in it’s punk-fueled, hate-my-life-and-parents rebellion.  So sloppy, the song seems to succeed in spite of itself.

Hating novelty songs, I’m not supposed to like Me Three’s “Alien Breakfast,” nearly as much as I do, but the damn song is as addictive as a sugar high.  Liquid Generation’s “I Love U,” is a catchy-as-fuck garage rock bender.  The Walkabouts turn out a sumptuous male-female harmony psychedelic pop song to rival anything by the Go-Betweens.   Capping Day crank out a retro-garage punk stomper with “Mona Lisa,” with more balls than half the Pretenders catalog, and the Bombardiers let loose a bomb bay full of detonating garage/punk that could lay waste to a small city.

The Queen Annes crank out a trio of freaking great cuts including the harmonica-led burner “You’ve Got Me Running.”  If that song doesn’t get you going, you better hook up your right atrium to some jumper cables.  The Glass Penguins lay down some inspired, gentle psych-pop of the sort The Windbreakers created, including the rather bizarre “Shadow of a Fish,” and the infinitely-gorgeous “She Moves Me.”   And some one-off cuts by Mad Mad Nomad, Jon Strongbow, The Fastbacks, Keith Livingston, and the label’s main-madman, Tom Dyer keep the variety coming. 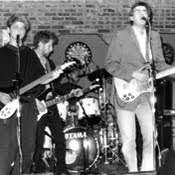 But I’m being intentionally sly here, cause the highlights of this 2-disc set are clearly wrapped up with four bands.   I’ve learned that Green Monkey Records will forever be associated with the Green Pajamas, and for good reason.  Possessing a voice that’d make Alex Chilton shiver, Jeff Kelly can create a pop-psych ditty as effortlessly as I trip over a 1-inch curb.  And the track that Green Pajamas’ fans clamor for is “Kim the Waitress,” presented here in all it’s instantly-infused-into-your-consciousness glory.  I don’t even have words to describe the craft here, but with its incessant bass line, sitar flourishes, constant toe-tapping beat, and lyrics written in homage to a real-life waitress at Mr. Ed’s Restaurant in West Seattle, “Kim the Waitress,” may just be one of the most incredible pop songs you’ve never heard.   But there’s so much more to the Green Pajamas than one song.  Each of the 5 songs here hits its mark.

The next undeniable band here is Life, which steals the imagination with their two cuts, “If it Works (Don’t Fix it)” and “If I Had You (For Natalie)” which both chime with a burning post-The Alarm passion of jangling guitars, soaring vocals, and never-ending hooks.  The Hitmen, blow any cobwebs off the disc with their two slices of post-punk inspired, bass-massive rock.  “I Love Your Poems of Love” bridles with an edgy-post Echo and the Bunnymen nervousness, while “Thrasher’s Corner,” simply destroys, like some cranked up, pissed off post-punk, metal, reggae, hybrid. 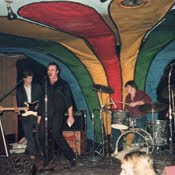 Finally, a special nod needs to be tipped towards Tom Dyer’s own band, The Icons who strip the paint off every bumper in the garage with their charging purist-blast of “Write Back to Me.”   Dyer has just re-released the Icons classic retro-rock masterpiece, Masters of Disaster, on CD and I got that baby here in my hot little hands.  So expect a review of that one soon.

I’ve left tons of good music out of this review like The Elements, Slam Suzanne, and Danger Bunny, but there’s just too much here to talk about.  If you’re a fan of indy pop music—good honest, ballsy, delicate, garage-y, punky, folky, mildly trippy pop music—do yourself a favor and pick up this anthology.  It will be nearly impossible for you not to find several tracks that you’ll just wonder how you lived this long without.  This isn’t a CD set to be played, it’s one to be savored, immersed in, bathed in.

It really is that good.

Now I gotta go find me a green stuffed monkey.

Buy here: It Crawled From the Basement: The Green Monkey Records Anthology