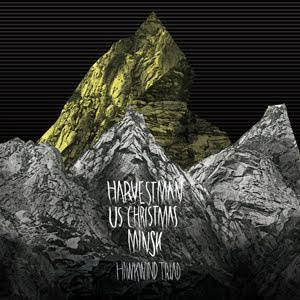 Most tribute albums are kind of a waste of time and money. Maybe there are a handful of worthy homages but for they’re usually disappointing and you wind up rarely playing the entire record. The Hawkwind Triad is a different story all together. Here you get 3 bands, that all have a pretty strong Hawkwind influence in the first place, paying tribute and taking liberties with material that they clearly love. The participants are US Christmas, Minsk and Harvestman.

Of the 3 bands, US Christmas probably play the songs closest to the originals and tap into the Space Ritual high energy levels that Hawkwind performed at. Take away all the tripped out space effects and Hawkwind always had a ass kicking rock and roll soul, especially during the era Lemmy was in the band. “Master Of The Universe” opens the record in high spirits. The riff is huge and they faithfully recreate all of Dik Mik’s bizarre “audio generator” blips and squiggles. “Psychedelic Warlords (Disappear in Smoke)” and the 11 minute “You Shouldn’t Do That” are great examples of why Lemmy always said that Hawkwind may have looked like hippies but weren’t all peace and love. If the astronaut boogie of “Orgone Accumulator” doesn’t you get you doing the zombie dance, turn in your space suit immediately and return to the mundane earth.

Minsk attack “7x 7” with a lot of intensity and vigor. This is probably what it actually sounds like as your breaking through the sound barrier. Things get pretty trippy on the 12 minute “Assault & Battery/The Golden Void,” 2 songs from the 1975 album Warrior on the Edge of Time. “Assault & Battery” is delivered slow and hard with lots of intense vocals. “The Golden Void” takes you on a pretty wild ride with some slower parts to balance out the space frenzy. The mainly acoustic “Children Of The Sun” somehow manages to mix in equal parts Jethro Tull and Swans into the original Hawkwind song.

Of the 3 bands, my favorite songs are from Harvestman, a side project of Neurosis members Steve Von Till and Jason Roeder. Von Till’s tortured vocals work really well with the material, especially on “D Rider.” “Down Through The Night” has even more sound effects the original. “Magnu” is an 8 minute stomper that fans of Can as well as Accept’s “Princess of the Dawn” can rock to together. Lemmy’s “The Watcher” is given a bleak, creepy overhaul that will make you feel paranoid even if you’re not stoned.

Old time fans of Hawkwind should really like this and it also serves as a great introduction to a band that’s often misunderstood. Play this one loud for sure.

http://www.allthatisheavy.com/info.asp?item_num=ATH-7179
Posted by The Ripple Effect at 12:02 AM