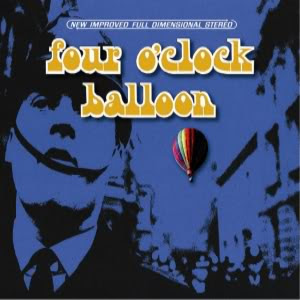 I was seven years old in 1964.  The British Invasion had just begun and so had my interest in rock music.  Beatles, Rolling Stones, Who and Kinks filled the new stereo FM and monaural AM radio airwaves with UK bands playing blues and rock ‘n roll “all day and all of the night.” The shows were interspersed with reports of draft lottery number call ups and troop casualty totals from the Vietnam war.  The country was grieving the loss of a President.   The up-tempo, hard-edged but harmonious, pop song with a British accent was soothing and exuded optimism at a time of great pain, sorrow, injustice and oppression.  However, as the ‘60’s wore on the mood, and the music, grew darker.  The British Invasion only lasted for three or four years before the times, music and musicians moved on.
Carlos Santana band mate Tommy Anthony (Guitar/Vocals), and John Allen (Guitars),  Michael Quinn (Bass), and Omar Hernandez (Drums)  mine the sound of The British Invasion on four o’clock balloon’s first and only self-titled album.  This is a new, yet nostalgic, project.  For those of us that cut our teeth on 1960’s British rock and blues the music sounds like an old friend.
The album starts with “I Need You,” a song worthy to be vintage Kinks.  The driving bass is reminiscent of the original bass player for the Kinks, the late Pete Quaife, who appeared on most of the Kinks’ hits between 1962 to 1969.  The song is Kinks music that could easily have been written by Ray Davies in his prime.  This effort is followed by “Means To An End”  a song crafted with a sound Pete Townsend would have admired during the Who’s “Magic Bus” era.
In 1966, Left Banke, an American baroque pop band, had a hit with the song “Walk Away Rene.”  At about the same time the Beatles released “Revolver.”  Amazingly four o’clock balloon is able to perform a Vulcan mind meld between the sounds of these two styles on their track “Stood In The Rain.”  If it were 1966, “Stood In The Rain” could have been a bigger hit than “Walk Away Rene.” 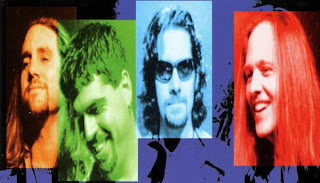 On “Tell Me Why” the band’s sound floats more toward the mid-1970’s.  It is as if George Benson and George Harrison during his “Crackerbox Palace” period had formed a band and recorded together. The song “How Long,” is a beauty of a jazz pop tune and is followed by “So Wrong” and “Real, ” songs which would be right at home on the Beatles “Rubber Soul” album.
four o’clock balloon is also able to mash mid-1960’s Kinks’ with Beatles’ pop melodies on “More or Less.”  Then, what follows is bizarre fun - a song called “Ripley,” an interesting jingle jangle of a ballad about, of all things, a rhinoceros.
George Harrison’s sitar-based musical sound from the Beatles’ song “Tomorrow Never Knows” provides the backdrop for the next track, “Less Than Nowhere.”  Following this flurry of fab four fun comes the heavier “Why Me, Why You?”  The tone of this track is closer to that of mid-60’s garage bands like the Troggs.
The album ends with the song “The Joker Laughs at You.”   It is another Beatles-like mid -60’s foray. four o’clock balloon explores the sound of  the experimental Beatles heard in 1967’s “I Am The Walrus” and mixes it with a touch of “Sgt. Peppers Lonely Hearts Club Band.”
Some will say that the sound is nostalgic - that music has long ago moved on from the British Invasion and even from the Beatles.  Most musicians pay tribute to this type of music as the foundation of modern rock and all that has come after it.  Bands occasionally attempt to modernize an old mid-1960’s song or two, but, few write new music in the style. This album proves that that is unfortunate.  There is power in the music of that era that transcends its place in time.
Of course, it never hurts to be favorably compared to the Beatles.
- Old School
Posted by The Ripple Effect at 12:11 AM

How can we get hold of this album
I saw a cover for an album called "Brit Poppies" by The Four O'Clock Balloon last year 2010 in november and since that day have not been close to finding it again, the cover I still have lists 18 tracks. this is a must have rerelease so if you have any clues as to where this is available ......luv to know