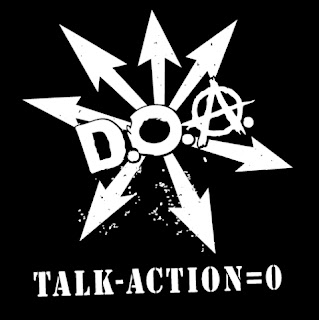 Has there ever been a better slogan than Talk – Action = 0? D.O.A. mainman Joey Shithead has been doing exactly that for well over 30 years. He’s back with D.O.A.’s 13th album and it’s just as fired up as the classic “Disco Sucks” single was in 1978. Joey Shithead is a true lifer, like Lemmy, Charlie Harper, Willie Nelson, etc. The only thing that’s gonna stop this guy is if this planet runs out of beer. And if they discover beer on another planet I guarantee you that Joey will figure out how to drive his van there and drink them dry, too.

Talk – Action = 0 is pure punk rock as only D.O.A. can do it - fast, furious and funny. Album opener “That's Why I Am An Atheist” is a kick ass burner full of anger and speed. “Rebel Kind” sounds like a killer 1982 D.O.A. song that should have been on the great Bloodied But Unbowed compilation. These guys are REALLY tight for a bunch of old punks. Joey’s guitar playing is killer and the rhythm section of Dirty Dan (bass) and Floor Tom Jones (drums) hit hard. 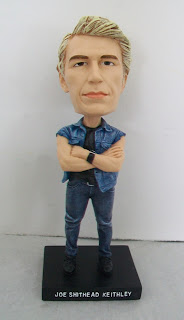 Joey’s lyrics are just as pissed off as ever. Political songs like “The R.C.M.P.” (Royal Canadian Mounted Police), “Consume! Consume!” and “Tyrants Turn In Hell” get the point across without being preachy. Joey has fought City Hall all his life, and even won a few times, but always wants everyone to make up their own minds. “Captain Kirk, Spock, Scotty And Bones” and “I Live In A Car” (not a cover of the U.K. Subs classic) are more mid-tempo and balance out super fast ones like “They Hate Punk Rock.” As on most D.O.A. album there’s a few covers. Bob Dylan’s “The Times They Are A-Changin'” gets a punk make over. If that’s too serious for you, then skip ahead to their drunken rendition of Dean Martin’s “Amore.” Who let the Canadians into the wine cellar?

The fact that D.O.A. is still going strong in 2010 is so inspiring. If you think you work hard, check out Joey Shithead’s autobiography I, Shithead: A Life in Punk for true tales of noise, filth and fury. How this guy has managed to keep his sense of humor through all of the hard times and rip offs is truly incredible. Fans of real punk and true rock & roll spirit should pick this one up. And get a Joey Shithead Throbblehead doll while yer at it, too!