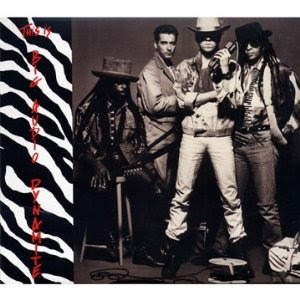 “It was still punk rock.”

And it was punk.  Maybe not punk in the storm-the-Hammersmith Palais- variety of early Clash, but punk in and of itself.  If you define punk as going against the grain, striking out with rebel vision against the status quo, breaking new ground, being an outsider to the common theme, then there’s no doubt This is Big Audio Dynamite, was punk.  And not just punk, but one of rock’s great lost albums.

After getting kicked out of the Clash for being “ideologically unsound” Jones withdrew to West London and regrouped.  Letts pulled him out of his shell and the work on BAD began.  While Strummer put together an almost-Clash to cut the crap, Jones set about actually making some ground-breaking music.  Sampling was unheard of then, and armed with one of the first Akai sampling machines, Letts watched endless hours of television and movies, pillaging the perfect samples.

And the album worked.  While Strummer was floundering and the Clash sinking without a wimper, Big Audio Dynamite became the rage.  Their sound was modern and fresh and unlike anything else out there.  “The Bottom Line,” the first single, was a smart and snappy reworking of Grandmaster and Melle Mel’s “White Lines (Don’t Do It)” with big, punky guitars, punchy beats and a chorus that buried itself into your head.  “E=Mc2” is a masterwork of pop, punch, and intelligence, complete with Clash-style vocal harmonies.   “Sony” is a tongue-in-cheek, stick it to the corporate boss declaration, showing that Jones hadn’t lost any of his punk sensibilities.   While “Stone Thames” showed Jones still had his finger on the social pulse, being one of the first songs written about the then-new AIDS epidemic.

Time has aged the album well.  The production holds up, the ideas still sound fresh, the beats still propulsive.  Add to that an entire second disc of remixes, extended versions, dub cuts, alternate versions, and non-album cuts, and this Legacy Edition is essential.