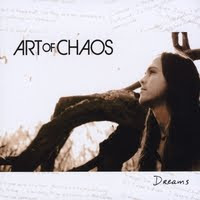 With early success it is sometimes hard to maintain momentum.  Nothing stays the same, but different can be better. It is like the Heisenberg uncertainty principle in quantum mechanics. Position and momentum cannot simultaneously be known with precision. The more precisely one property is measured, the less precisely the other can be measured.

Art of Chaos is an alternative-metal band that popped up on the Los Angeles music scene in 2005.  Immediately singer Brian Torres, guitarists Matt Ardisson and Miles Knowles, bassist Jeff Sutton and drummer Tim Galvin got gigs at The Troubadour, The Roxy Theater, and The Key Club in Hollywood.  By 2007, the band had released three EP’s and was voted “Modern Rock Band of Year” and “Performer of the Year” at the 2007 Los Angeles Music Awards. Last year Art of Chaos won a slot on MTV2's "LA Battle Projekt”, and opened one LA concert for Linkin Park.  Linkin Park was so enthralled by the performance that they asked Art of Chaos to open for their entire Southwest US tour. They subsequently opened for a “who’s who” list of up and coming heavy metal bands.  However, on August 10, 2009, the band broke up.

The EP “Dreams” was released this February under the band name Art of Chaos, It is actually a solo work by singer Brian Torres. Torres describes the sound as:

. . . anthemic alt rock meets lyrical confessional pop. There are a lot of electronic textures, and the sound is often very lush. I want to bring atmospheric ambiance to that melodic space. It's a fusion of ethereal elements with mainstream rock.

The EP “Dreams” was produced by Lee Miles (Red Jumpsuit Apparatus, Tickle Me Pink, Puddle of Mudd.) Torres lists his influences as “Incubus, Radiohead, Alanis Morissette, Sigur Ros, Jeff Buckley, Led Zeppelin, Imogen Heap, Deftones, Placebo, Fiona Apple.” It is hard to imagine how these exceedingly disparate influences mix, yet Torres, with the help of Miles, pulls it off.

Until I reviewed the band I could have sworn that Torres was female.  The vocals are high pitched, higher than those of Geddy Lee of Rush.  He maintains the same intensity as Lee and can, at times, evoke sounds similar to those that made Rush a super group.

The songs on this six song EP – “Dreams,” “Tightrope,” “Obsession (Surrender Me),” “Sweet Chariot,” “Just Like You” and “Hide and Seek” – are heavily produced. The track “Dreams” starts with a beating heart at rest and goes through permutations from a pop ballad to a “wall of sound” anthem.  The songwriting is introspective.  Torres sings, in part:

On “Tightrope” Torres builds tension with a terse guitar, clipped lyrics and a ¾ beat, complete with processed vocals that make parts of the song sound like they are thoughts not to be uttered out loud.  It is all held together by a great lyrical hook:

The track “Obsession (Surrender Me)” is the most marketable modern rock song on the album.  It has high production values with heavy rock guitar and bright, loud, vocals. Torres sings of his pain in the chorus:

The song “Sweet Chariot” is a rock anthem artfully incorporating portions of the lyrics from the traditional song “Swing Low Sweet Chariot.”  It is another one of Torres’ angst-filled screams at the world.

The tune “Just Like You” is encased in distortion and driving bass as Torres bemoans a shaky relationship. It starts slow and winds its way to anger over trying to be “Just Like You.”

The last track, “Hide and Seek,” is different from the other cuts on the EP.  It is slow and ethereal - almost angelic - as if created for a church choir.  You won’t be dancing to this one.  No driving bass or guitar.  No scorching vocals. The outro is built on point and counterpoint harmonies.  The singer regrets that “You don’t care a bit.”

This is a new direction for Art of Chaos, or should I say, Brian Torres. I am not sure where it will take him.  He has maintained the momentum of the predecessor band Art of Chaos, however, it is a different Art of Chaos – it is Brian Torres’ well-organized Art of Chaos, and  I can’t for the life of me determine the position in which that will ultimately leave him.   Perhaps it is because the focus is on his momentum.