Another Tsumani of D.I.Y. Ripple Bursts – Featuring Jason Ager & The C.O.P.O., Obsidian, Brady Harris, Alejandra O’Leary, and Behind the Sun

Without a doubt, one of my favorite columns to write is the D.I.Y. Ethic missives.  We at the Ripple, just can’t tip our hats high enough to salute all the D.I.Y. musicians who strive against spellbinding odds to pursue their music.  Much respect.  So today, we’re gonna run through five stellar D.I.Y. projects that are truly head and shoulders above the pack.  Pay them some attention.

First up on our rundown is this downright funky, delightfully bluesy, deliberately rocking platter from street funkmeister Jason Ager and his C.O.P.O.  Now, I don’t know what C.O.P.O. stands for, but it’s filled out by Austin O’Connor jazzing out on the bottom end and Sheri Gallagher keeping the whole shebang moving on time.  A while back, Pope and I professed our love of gritty, funky street blues bands such as Fun Lovin’ Criminals and G. Love and the Special Sauce.  Now add Jason Ager to that list.  Blessed with a voice that just oozes soul the way BP oozes oil, Jason takes his time moving through this juicy set of hip and cool steamers.  “Jocelyn” puts it all right on display.  Jason’s voice is rough and gruff, languid, unhurried as he digs deep into his vocal chords.  Best of all, despite the song moving at a nice clip, Jason takes his time with this burner, letting it ebb and flow, grow and recede.  Great guitar, deep funky bass, Sheri hitting everything within arms reach.  It’s all good.  Fans of G. Love must take note of this one.  “Sing-Along Jawn,” brings in some tasty, underground club jazz bass to kick us off, dropping into a stuttering funky treat.  “Blue Kathleen,” is about as funky as white folk can get.  “Rock Star,” is a loose-strung bout of down-home, barbecued funk, while “Strawberry Wine,” has just got to be the feel-good hit of the summer.  Give me a picnic, a soft blanket, a warm breeze blowing through the leaves of a dangling weeping willow, and my wife and we got us a day of summer perfection.

A dynamite debut, and perfect for these hot summer days.  Black tank top not included.

Alternating between beautifully melodic and punishingly heavy as fuck, Obsidian just may well be the most complete, ready for the big-time pop-metal outfit I’ve ever heard.  I mean, make a checklist of what it takes to have a destroyer of a band, one that could go toe-to-toe with the heavyweights at Ozzfest--or Crue’s fest or whatever fest—and you’ll spend all day just checking those qualities off the machine that is Obsidian.  Stellar guitar work, massive bass-heavy production, crushing riffs, dead-on melodies, and a singer who can belt it out with the best of em – gruff enough to please me, but not so much to turn off the casual fan.  No two ways about it, Obsidian got it all and their debut album, Dreamcatcher is the proof.  “Whispers,” just breathes metal power with a dead-hook of a chorus.  “Sounds of Silence,” is a terror, starting off with a muted guitar a la Creed (back when they were still cool).  The muscle kicks in about 30 seconds in with another damn-winner of a melody, chugging guitars and a chorus that will drill its way into your head.  There’s late 80’s metal here, 90’s nu crunch, and more.  “How About the Truth,” is a metal power ballad that’s actually worth hearing while “c.k.t.c.” just terrorizes.  Personally, I prefer the balls out metal cuts more than the mid-tempo, slower songs but both types demonstrate the craft these guys bring to the table.

I’m not making any predictions here, I’m just telling the truth.  You will be hearing tons more from these guys in the future.  They will rule.  Nothing will stop them.

There’s two lines of thought on a cover album.  One says you play it straight; that the greatest feat is to really play like the band being covered.  The other goes the exact opposite way.  Re-interpret the song in as radical a style as you can.  Run it through your own musical blender, pour out the contents across your stylings, and see how it tastes.  Personally, I prefer, the later.  There’s nothing as much fun as hearing a song you know and love, totally re-imagined in bold and startling ways.    That’s what Brady Harris does.

A low-key, rootsy singer/songwriter from Texas, on Cover Charge Brady takes some of the most unexpected songs you can imagine a cowboy songsmith to be singing and turns them into startlingly new pieces of music.  Versions no person could resist.

So what am I talking about?  How about a warm and languid version of Madonna’s “Like a Virgin,” sung perfectly straight without any Weird Al irrelevance.  It’s a fantastic, absolutely addictive version.  As is his slide-guitar, lazy version of Duran Duran’s “Rio.”  Under Brady’s vision, The Clash’s “Spanish Bombs,” takes on a full, over-the-hills country charm,   But nothing can ever be as just flat out perfect as his low-toned, deep acoustic and slide guitar version of Motorhead’s “Ace of Spades.”  I played this one for Pope and he was stunned by the brilliance in this interpretation of the track.  The true strength of Lemmy's song writing becomes oh, so apparent.  Truly, a cover masterpiece. 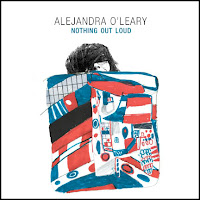 Alejandra O’Leary – Nothing Out Loud

We get tons of submissions from singer/songwriters coming into the Ripple and to be honest, it gets hard to tell them all apart.  Somehow they all seem to fall into this vague morass of love lost, acoustic ballading that becomes a little mind-numbing.  Not Alejandra O’Leary.

The very first time I heard Alejandra sing, I fell in love with her voice.  Coquettish, mildly childish, kinda like Jewel, but a Jewel that doesn’t get annoying and grate on my nerves.  In fact, the more I listen to Alejandra, the warmer and more inviting her voice becomes.  And that’s important, because Alejandra’s voice is clearly the main instrument here.  That’s not to say the album is spartan.  Au contraire!  Each song is filled out with a robust arrangement, bringing in different and sometimes unsuspecting textures to play against the guitars.  And let me tell you, Alejandra can write a song.   The fact that “Ever After,” isn’t already dominating the radio is a crime against musical common sense.  Place whatever name you want here -- Sheryl Crow, Jewel, Natalie Imbruglia – and Alejandra will stand tall.  “Love I Been In,” is a gorgeous, multi-melodic piece of pure pop perfection.  Don’t know how Jack Johnson can sell a single album while people don’t know this song.  “Tremor,” may be my favorite song on the album, employing keyboards along with the bass to bring in a delicious, ambient, downtempo vibe while still maintaining all her pop smarts.  Radio? You bet.  I’m gonna make it my own personal mission to get this song heard.  Ripple Radio to start.  The world to follow.  I’ve fallen in love and I’ve fallen hard.

Israel’s vast Negev desert may not be a place you think of as the rock capital of the world, but Behind the Sun are doing their damndest to change all that.  Playing a sort of post-grunge, quasi-progressive brand of desert metal, Behind the Sun have all the pieces to put the Negev desert onto the rock and roll map.

Beginning with a simply goreous, decidedly desert-feeling, acoustic passage, “Second December,” brings everything Behind the Sun have right to the table.  Post-Alice in Chains melodies and crashing guitars.  A powerful post-Tool groove and charge and some serious riffing.  Complex yet simple, this song is just beautifully crafted and played.  Listen to the guitar flourishes throughout the chorus.  There’s something very different there, something that I can only define as Israeli Desert Metal.  Warm and textured.  “Wishful Thinking,” plays more towards the bands jazz/prog tendencies in a King Crimson sort of way without ever losing itself up it’s own ass.  “Nothing But a Stain,” is a post-Pearl Jam ballad of uncommon power.  “Running Water,” is pure on jazz-inflected, jam band nirvana of the sort that the Renegade Saints would drool over.   The acoustic guitar work throughout the whole album is mind-bending.

So much to love here.

buy here: Behind the Sun