A Sunday Conversation with the Dolly Rocker Movement 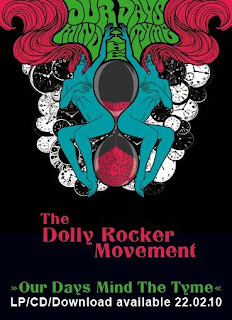 When I was seven or eight my brother and I found some old cassettes in the family house and I remember we had a Best of The Sweet tape. I played that tape till it finally snapped. It was the wildest thing i had ever heard. I was rocking so hard to "Hellraiser" I fell off my bed and broke my collar bone. The next phase was probably when the whole grunge thing came along. Finally there was new music that divided a generation. Most parents hated that shit. Funny cause now I actually dislike allot of that nineties rock too. But it was fun at the time. Then came the sixties obsession. It seemed to go hand in hand with experimentation on all levels. While the jocks at my school were digging hardcore skate punk and Metallica, I would waltz into class glazed eyed grooving to The Monkees. It was a rebellious time. I loved being an outcast and 60's music was the perfect way of saying to everyone "you don't know shit".

Generally it comes from simple chord progressions. I pretty much use the same chord progressions over and over. Thats what rock n roll is. Repitition and familiarity. But the way the songs take on their own personality is adding melody. That comes next. Melody is the most important thing to me. It's the thing that people remember.  I also rely on the beat to give me direction. Beat is very important to me aswell. Thats what gets people moving. whether it be slow and swaying or down right jiving. I have a beat in my head and that gets things moving. If you marry a good melody to a sweet beat you can't go wrong. It seems like a very simple idea which to me it comes easy. But without an understanding and appreciation of simple music you'll be scratching your head in wonder. 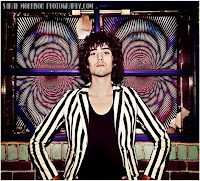 New inspiration can be found anywhere it's all about exploration. I'v had so many alter egos and personal adventures in my life it's hard to keep track of who i am sometimes. But thats where the songs are coming from. thats why I had to move to the United States. I need movement in my life at all times. I need to change my look, my personality, the way i think and talk constantly. Thats why no-one can guess my age. I refuse to fall into the trap of "oh this is me, i have to deal with it" Fuck that! At the moment i'm alreading changing into something else. I'm like 100% sober now. And ideas are falling from the sky. It's crazy. I'm all about looking ahead. My past albums when i listen to them are sung by someone else. I can't reach that person anymore. I'm far away. Thats why now I'm Daniel Darling. I must remain interested in myself before I take it to the streets.

I have a signature way of doing things. Even though I change my personality I have a formula. I'm an outsider when it comes to scenes. Its Iike dressing in drag & walking into a bar then ordering an ice water and a newspaper to read. It kinda makes sense but theres something a little different about it that makes it stand alone. That's the way I look at my music. I'v dealt into many different genres. I'v played the copycat before aswell. To me it's just pop music.

My intention is write catchy tunes. My last album "our days mind the tyme" is the showcase of what is to come. The next Dolly album is going to be something else. I write tunes to make me feel good. If other people can jive on that feeling too which i know they can then great! this is the entertainment business and it's my job to make the people dance.

It's all spontanious. i never like anything too "staged" it has to come naturally. Straight off the bat. Sometimes complex lines work, sometimes simple lines work. it's all about taste. Taste is everything.

For years I put the business side on the back burner. Sure I had a great time but I wasn't going anywhere. I still don't fully understand the business side of the industry. Thats why I have an amazing manager now who is guiding that aspect for me and the band. Having other people believe in what you do is extremely motivating and comforting. The best thing I can do to stay afloat is play my role. Do my Job. And that job is being an entertainer. Whether i'm living on my mac n cheese or dining out I have to write tunes and perform them. The industry requires product and I produce it in the only way I can. 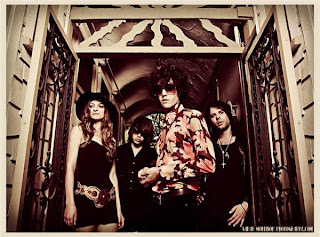 Our bass player Jimmy plans to be slayed with an axe after performing "A Sound For Two". His boots will be taped to his knees so he resembles a dwarf. It's going to be wild!

Your drivin in your car and you reach your destination but you have do  another round of the block because the song you were listening to on the stereo hadn't finished yet.

I have a new song called "The Holy Son". It's going to be a hit on the next album. Also I really like the way "A Sound For Two" came out on our last album. It was never intended to have that Baroque feel, it just happened and I was like wow! 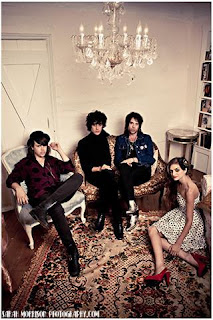 My favourite artist from the past decade would have to be Alison Goldfrapp. She is amazing. She's everything Madonna should be. I would love to colaborate with her in the future. Electro glam rock seems like a natural progression for me. But in her case she has done it & nailed it so well. Who can top a song like "Strict Machine" ?  I flip everytime i hear it.

Vinyl for sure. I don't buy cd's anymore. I love my I-pod too. Having and Mp3 player is like your own little weapon. Bake to your favourite tunes while riding the bus. It's so radical. Our last record just came out on vinyl which i'm so happy about. To have the artwork blown up to that size made me feel like i'd really produced something. It's so classic. They should print all albums on vinyl. Keep that spirit alive.

Ahhhh in my current town (Los Angeles) I haven't had much of an oppourtunity to go record shopping as I'm pretty much broke. I'v borrowed a heap of records from friends. Ameoba Records is like the mecca record store, I'v been in there a couple of times and you can get lost in there for sure. You'd be best off ordering of Bomp! records. They have sooo much cool stuff. Depends on your taste really. In Australia you can't beat "Red eye Records" in Sydney & "Off The Hip" in Melbourne.

Keep Cool & Stay Warm Out There Waveriders!
Posted by The Ripple Effect at 2:40 AM