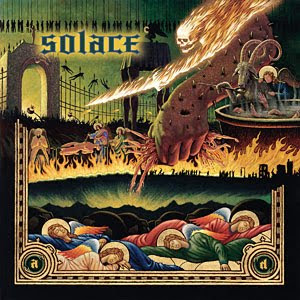 New Jersey’s Solace are usually categorized as a “stoner” or “doom” band but to my ears they’re a straight up metal band from the school of 1982. Their new one A.D. reeks of classic Judas Priest, Black Sabbath, Iron Maiden and maybe even some vintage Alice Cooper, too. A.D. is their first album in 7 years and fans have been waiting impatiently dubbing it “Jersey Democracy” as the band went through some line up changes and several recording sessions.

In the end, it all seemed to work out alright because A.D. is a kick ass album from start to finish. Produced by Benny Grotto and the band, this thing sounds great. The guitars of Tommy Southard and Justin Daniels sound massive as they kick out catchy riffs, fills and solos. Rob Hultz’s bass thuds along nicely with Kenny Lund’s tasteful drumming. Jason (no last name) sings his ass off and has layered some nice harmonies throughout the entire record. In this style of music, vocals usually take a back seat, but Jason’s are upfront. He sounds pissed off and you can hear every word.

The 9 songs of A.D. comprise almost an hour of music. Most of them are over the 5 minute mark but have plenty of variety to keep your ears from getting bored. Album opener “The Disillusioned Prophet” starts off fast and heavy, slows down and then blasts off into an Iron Maiden gallop. “Six Year Trainwreck” has a great opening riff that combines vintage Deep Purple with Captain Beyond before evolving into a “Children of the Grave” romp. “Down South Dog” is a Quaalude worthy Sabbath boogie with a spaced out guitar solo. “The Skull of The Head of a Man” begins slow and creepy before switching gears into pure old school hardcore punk. In true hardcore spirit, it’s over in about 2 minutes. The album wraps up with the slow burn of the 9 minute epic “From Below.”

Lots of bands operate in this area of metal that includes 70’s hard rock but few can match Solace in terms of creativity and attitude. They’ve been at it for a long time and hopefully we won’t have to wait another 7 years for the next one.

One of the most underrated metal bands in the country. These guys have been absolutely killing it for years and should be on every metal fan's shelf.