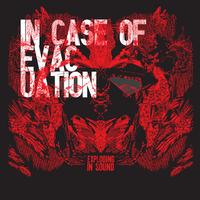 IN CASE OF EVACUATION, remain calm and allow Exploding In Sound to be your guide.  It is amazing what can be accomplished in the span of two and a half years.  Since the inception of Exploding In Sound, their aim has been to bring great new music to an ever growing audience.  A simplistic mission statement from one music obsessed fan with a desire to help the artists that deserve to be heard.  Now comes the newest release in the beloved compilation series… IN CASE OF EVACUATION, with a  line-up that can't be missed!!

A compilation of epic magnitude, there is so much great new music contained within that we had to make it a double album.   The FREE DIGITAL DOWNLOAD contains two discs worth of music from some of the greatest bands of our time, brought to you exclusively by EIS.  IN CASE OF EVACUATION features over 30 bands from around the globe including: We Were Promised Jetpacks, Caspian, Maps & Atlases, Wintersleep, Open Hand, Red Fang, Slang Chickens, Helms Alee, Imaad Wasif, LaFaro, Crippled Black Phoenix, The Twilight Sad, Old Canes, Black Helicopter, and many more incredible bands.  The music contained within your emergency evacuation supply transcends through all subgenres of rock, not concerned with what is cool or trendy, but rather with what is artistic, pure, and well… rocks.  IN CASE OF EVACUATION captures the true essence of the site, combining the music of critically acclaimed and well established acts with the up-and-coming bands that are virtually unknown to the masses.  Exploding In Sound remains dedicated to both, helping to spread the word of great rock to all with an open ear.

Sharing of the download link is HIGHLY recommended and encouraged to anyone and everyone you think might be interested. As this is a FREE compilation, the goal is to gain the maximum audience achievable, and word of mouth is always appreciated.  Enjoy.

IN CASE OF EVACUATION TRACKLIST:

1.       The Twilight Sad – Reflections in the Television

Cool disc. Listening now. So far like the Black Helicopter and Gods are Ghosts tracks.