Punk Me? Punk You! -- Featuring The Second Academy, Leatherface, and Pistol Whip 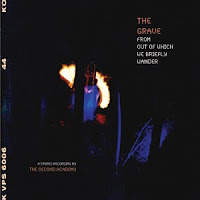 I already professed my love of Eric Balaban and his amalgam of garage punk, The Beautiful Mothers, but you know what, the cat is so talented that one band wasn’t enough for him.  Enter The Second Acadey and their spinning translucent green vinyl ode to lo-fi experi-punk, The Grave From Out of Which We Briefly Wander.  Intentionally not as realized as The Beautiful Mothers, The Second Academy attack each composition as if it’s a moment in the now.  Songs seem to start off as sketches, ideas, and we bare witness to the band filling out those concepts as the inspiration hits them.

Think a slightly more aggressive Violent Femmes or a stripped down Replacements, and you’ll begin to get the vibe.  Songs like “Aftergrass,” bridle with pent up tension, pulsating in the throb of the bass, the whine of the guitar, the sparseness of the composition.  One of the stand out tracks here, “Aftergrass,” percolates like an early Gang of Four outtake, riding that bass.  So simple but so effective.

Tracks like “The King and Queen of Filth,” explore more experimental realms of dissonance of feedback, but Eric always brings it back to down to earth with mini-masterpieces like the post-punk throb and roll of “The Wasp” or the very raw Replacements-esque acoustic agit-folk/punk of “Little Sister” and “ Pretty One.” Eric even manages to lock onto a post-sixties, summery psychedelic pop vibe (filtered through the Violent Femmes) for “Adventure Tuesday.”

As always, Tsurumi Records does things right with a limited-edition green vinyl pressing of 1000 platters, complete with enclosed full CD of the album and color liner insert.  It’s clear we got a label here doing what they do out of love, and a band living up to that adoration.  Check it. 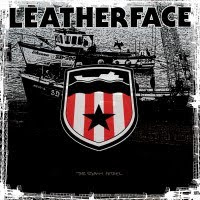 It’s hard to believe that Leatherface have been going at it for nigh-on twenty years already, rampaging through one punk rave-up after another.  It’s been 6 years since their last album, so certainly, these aging punks have slowed and mellowed since then, right?

Hell no!  The Stormy Peterel finds Leatherface as reinvigorated, charging, and  . . . . melodic as ever.  Beginning with the almost Police-ish tones of “God is Dead,” the new album is one treat of roughened melodic punk after another.  And by roughened, I refer more to that voice than the music.  In truth, Leatherface are a lot more melodic and easy to listen to than their name might suggest.  Dismiss any images you have of chainsaw wielding madmen and severed body parts.  Leatherface bring on a Husku Du-ish brand of gritty punk that never loses sight of the song, the chorus and the hook. On this, their ninth album, they remind me of a cross between New Model Army and the Subhumans.  Moderately under-produced, guitar-oriented and ready to tell a tale.  In many ways, the album is so catchy, it’s almost pop.  Stepped-on-in-the-gutter pop, but pop nonetheless

“My World End,” brings on a more straight ahead dissonant punk attack, while “Never Say Goodbye,” could fit comfortably on just about any of your favorite New Model Army albums.  Guitars in full-frontal placement.

One thing that will forever set Leatherface apart from the many out there is the charismatic vocals of Frankie Stubbs, part Lemmy, part Tom Waits, all throat and bile. His rasp brings an immediate personality to each song.  “Nutcase,” uses that voice perfectly through a truly catchy guitar punch to a bop-in-your-car-singing chorus.   Surely one of the standout tracks here . . . but there’s lots to choose from.

Coming from Eerie, PA, and brandishing a career that lasted all of 2-plus years, it’s no surprise that Pistol Whip may be a band forgotten by history.  I certainly had never heard of them before this deluxe CD/DVD set made a surprise appearance at the Ripple office.  And truth be told, not every random 34 year-old Pennsylvania band is worthy of being resurrected and forced kicking and screaming into the modern day.

But Pistol Whip is.  Not that the brilliance here is readily apparent.  Terminal starts off with their inauspicious, only-released-record, a 7” slice of banal glam rock.  Sounding like a poor man’s Starz or a Kiss-butt band, the Pistol Whip story seemed destined to end right there.  But between the release of that single in 1977 and their journey to Chicago to record a 10 song demo, something freakish happened.  If you’d predicted they would have followed the Kiss path down staid corporate, MOR rock, you couldn’t be more wrong.  Instead the band that entered that studio in Chicago was a maniacal, piss-infused punk band on the order of the Dictators, with touches of the Ramones and the Stranglers thrown in.  Don’t know how it happened.  Erie, PA, is a far cry away from NYC or the Chelsea district in London, but there it is.

Chronicled here by a faded mono-cassette, the only proof that these recordings ever happened, the last 10-songs of Terminal are a must have for any fan of nascent punk.  These songs are like the missing link of rock.  The evolutionary bridge between horrid glam rock and inspired spittle rock and roll.  “Whatchamacallit,” is a fiery, snot-nosed blast of rough-throated punk, as good as anything else that came from that era.  Dig the wild “surf” organ, bringing in that hard-edged early Stranglers sound.  The guitars crush with venom and authority.  There is no hint of the glam disaster that was.  This is now.   Don’t know where the hell it came from, but damn is it good.  In fact, I may go so far as to declare it the best punk song you've never heard.

“Losing My Grip,” doesn’t let up.  Rough-hewed, confident in their anarchic disunity, this is raw, primal punk.   “Iron Curtain,” is even better with that nasty guitar tone and return of the organ wash.  Trashed up, punked up garage rock the likes of which weren’t being heard every day in 1978.