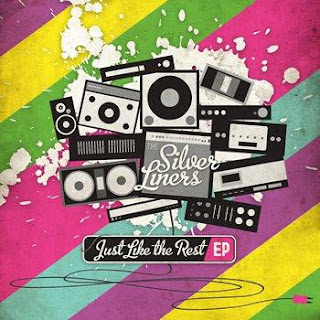 We’ve been totally blessed recently with the rainfall of fantastic bands that are capable of marrying irresistible melodies, and an alt-pop Brit rock sensibility to their killer garage hooks, gruff and muscle.  The Thieves, Mardo, The Steps . . . now let’s add The Silver Liners to that distinguished list.

Coming from Washington D.C., these cats are already making waves, killing the competition and being named a finalist for DC 101’s Last Band Standing Contest.  And it’s no wonder.  This five-piece can play with gusto, powering through a crowd-chanting chorus, slow it down to an achingly pretty sweetness, or add crunch and muscle when they want to rough it up.  Through it all, they layer a touch of Brit-rock sensibility over their pure American garage-y/powerpop.

It took all of 1.3 seconds to hook me on this baby.  Just the slightly fuzzed out tone of the bass opening “Just Like the Rest,” let me know that I’d latched onto something special.  Bring on the muted vocals, a steady beat, some truly retro-garage chops, and a killer breakdown/build up to that treat of a chorus.  This song has it all.  Packed together and ready to be shipped out to the world.  Expect to hear it on Ripple Radio soon.

From there it’s a non-stop journey through the 7 songs of modern pop rock.  “Heard it From a Friend,” is another sure-fire winner, with it’s ultra-cool guitar tone and it’s nod towards an Stroke-y feel blended with some pop punk smarts.  Should be on the radio.

Will be.   If we have anything to say about it. 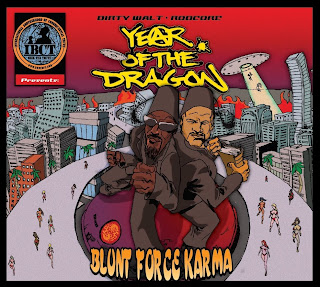 There was a time a number of years back when I preferred my rock and metal funky. Faith No More spent months in constant rotation, as did RHCP . . . 24/7 Spyz . . . ahh, reminiscing over one of funk rock’s finest moments in Fishbone’s Truth and Soul. I mention Fishbone last primarily because that was the first thing that I heard when I put on Year of the Dragon’s Blunt Force Karma. Heavy groove with dense metallic guitars and a funky hip-hop vibe all rolled into the sonic party. It wasn’t until later that I found out that YOTD actually involves a couple of members from Fishbone, so I was pleasantly surprised to know that my ears haven’t failed me yet. Blunt Force Karma, though funky at times, is much more metallic and punky than the aforementioned acts, and the album’s density makes it feel like being mashed together with a couple hundred partners on a steamy club dance floor. Massive walls of low end propel the tunes and are accompanied by subtle flourishes of guitar texture, grinding distortion and the dual vocals of Rodcore and Dirty Walt that seamlessly shift from a rap style to sustained melody.

“Poppin’” takes me back to those heavier moments from Fishbone’s The Reality of My Surroundings or Give A Monkey a Brain . . . coz’ folks, this song has got all of that heavy distorted guitar, low end bass groove, funky jam shit going on that’ll have you bobbin’ your head with the rhythms. “Jailbreak” is a flat out bad ass groover . . . not as dense in distortion and aggression as “Poppin’” and has a great melody to the vocal lines. That’s not to say the isn’t heavy, it’s just not overbearing in weight and density . . . the song has air for the notes to breathe, and YOTD do a great job of shifting between the mid tempo and up tempo passages. The title track shifts from the straight up soulful funk rock stylings of Fishbone to something heavier and darker, heavily distorted and emotionally intense. “Who Will Save You Now” opens with a bitchin’ metallic, fuck-heavy riff and opens up for the choruses, highlighted by soaring vocals and space for the song to take flight. Strong record . . . one that I expect fans of Fishbone would gobble up, and one that I suspect I’ll be using to shake the cobwebs from my head on those fuzz-brained mornings.

Posted by The Ripple Effect at 1:28 AM