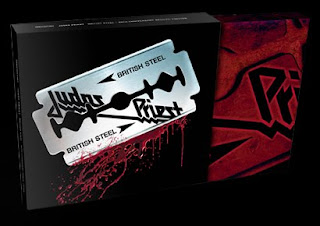 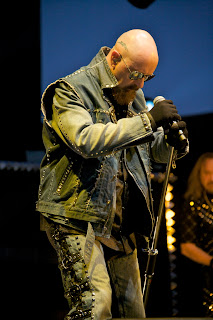 That meant I could get out of the small then-ranch town I grew up in and head for the big City.  Ok, so the big City was a town of about 30,000 people 7 miles away, but don’t you get it?  They had a record store--several of them, including a Tower Records.   I remember pulling (er . . . sputtering) my car into the Tower parking lot, my pockets full of money I’d slaved to get working 8 ½ hour shifts at a local car wash.  I wandered the aisles, my eyes agape.  I was 17, I had a car, and I had money.  The world was my oyster.

I don’t remember everything I bought that day, but I do remember picking up one new cassette.  The brand new, just released Judas Priest album, British Steel.  I’d never heard Priest before, but thought their album covers were bitchin’.  Unleashed in the East was maniacal.  Hell Bent for Leather frightened me in a good way. Sin after Sin, Sad Wings . .  . the list goes on.  But on that day, British Steel had just arrived and I knew I had no choice but to make that the cassette that would christen the tape deck in my new hot rod.

Leaving the parking lot, I popped the cassette in, and my entire world changed.  I’d been listening to “metal” for years.  Kiss, Aerosmith, AC/DC.  Pretty standard suburban/rural kid stuff.  The same things everyone listened to.  But I wanted more.  My musical nomad life had already begun, and I needed to wander, to explore.  I had no friends to accompany me on this journey.  My high school classmates were content with what they were listening to, so I had to venture out onto that musical crossroads on my own.  But nothing could have prepared my tender ears for the sound that suddenly was tearing my speakers apart that day.

“Rapid Fire,” was just that-- an insane, accelerating attack of things that were far too heavy for my heart to bear.  My pulse exploded in time to the jackhammer drumbeat.  When that heavy-as-heavy guitar came in, I felt reborn.  Rejuvenated.  Alive, as if for the very first time.  I’d never heard the song before but there I was, air-guitaring like a madman, singing along to that incredible Rob Halford voice that made Paul Stanley seem like some fairy boy from neverland.  And then came the song's famous mid-break.  Halford’s voice spat out words in a flurry, screaming about anvils, and wars, and corrosive subsiding, and KK and Glenn were tearing the world apart on guitars I couldn’t name.  Suddenly the universe made sense to me.  Suddenly, my virginity had been ripped from my musical womb. 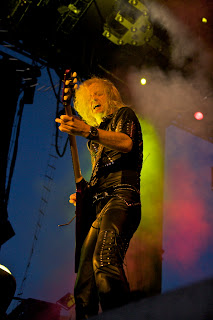 From that moment, I’ve worn my Priest flag with undying pride.

I’m not going to go into every song on this fantastic reissue of the album, other than to say that "The Rage" is still one of the absolute greatest metal songs ever written.  You know this album.  You know these songs by heart.  You’ve lived them in your own way just as I did that day in my Fiat. But I will say that I can still recall the exact moment that “Metal Gods,” kicked in, with that guitar tone.  That amazing, so metallic guitar tone.  This was no longer pansy-ass Kiss.  The guitar sounded so menacing, so alien, so foreign.  God damn it, that guitar sounded metal; as if it had been forged in a furnace of fiery steel and was clashing against massive chugging gears.  Priest forever defined not just metal for me, but the sound of a guitar that could actually sound like metal.

I won’t bore you about the time I saw them on the Point of Entry Tour, or how I was pressed so close against the stage, that KK Downing actually played his guitar on my face.  Those are my private memories.  But I will say that this 30th Anniversary Edition does the album justice.  The remastered songs sound even more metallic today.  The bonus song “Red White & Blue” is cool, and the live cut of “Grinder” decimates.  The video of Priest performing the album non-stop, in it’s entirety at a 2009 concert shows the band to be even more imposing than when I saw them as a kid.  Ageless and timeless, Halford in particular has become even more of a demented, metal God than he was back in 1980.  Dressed head to toe in his full-length leather and denim, he looks fierce and nasty.  I don’t care how old he is, he still looks like he could kick my ass. 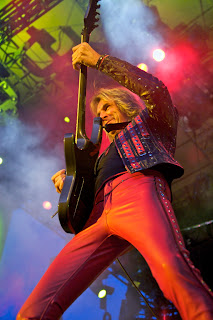 KK and Glenn are also ageless, as if they’d been locked in some air-tight vortex all these years and suddenly released to unleash all sorts of guitar mayhem on the masses.  Ian Hill has been a rock for ages and still anchors the side of the stage like an immovable mass, while Scott Travis beats with fury and passion.

You know the album.  You know the band.  You need to get this package.  Priest are legends and this is their most legendary moment.  Past or present, they still rule this world we call metal.  And for me that’s just the way it’s supposed to be.

My Fiat is long gone.  My Priest flag is still flying high.

British Steel and Hell Bent... are still some of my favorites to blast in a moving automobile.