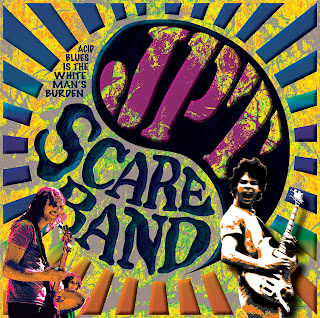 This is the first release on The Ripple Effect’s home grown label, Ripple Music, but before you start yelling about nepotism let me set the record straight. I have nothing to do with the label. Racer and Pope are in California and I’m over here in Brooklyn, NY. We’ve never met. What brought us all together is a mutual love of kick ass heavy rock, especially obscure stuff from the 1970’s and it doesn’t get more obscure than the JPT Scare Band. Truth (and Janey) be told, I’d be drooling all over this even if I wasn’t lucky enough to be associated with the Ripple crew.

With that public service announcement out of the way, let’s get down to business of talking about Acid Blues Is The White Man's Burden, a collection of unreleased gem’s from these acid rock freaks. If you’ve never heard the JPT Scare Band before, you’re in for a treat. This is the stuff that weirdos who like the Tommy Bolin-era of The James Gang (like Pope) cream over. Guys who own over 100 hours of UFO bootlegs, including the Paul Chapman years (like Racer). Losers who wish that Fuzzy Duck made a 2nd album (yours truly). This album will sit proudly next to your worn out Leaf Hound, Dust, Budgie and Ram Jam albums.

“Long Day” is the first song and has a more commercial feel than some of their other material, but at 7 minutes and with a typically blistering guitar solo from Terry Swope, there was no chance this song was ever gonna get on the radio. “Not My Fault” is a catchy mid-tempo ditty with a laid back Blind Faith groove and some “Hey Jude” inspired background vocals at the end.

The title track is the official anthem of JPT Scare Band. Acid Blues has been this bands burden since the early 70’s. Their toil is our reward.

or CD Acid Blues Is the White Man's Burden