The Danny Cowan Group - Driving Back To Texas 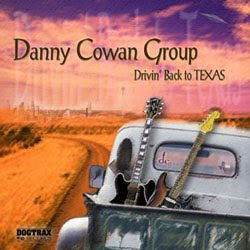 Footnotes.  If there is one thing law school taught me it was to always read the footnotes.  That is where the best stuff is hidden.  There is where you find the intrigue - backroom compromises, half-hearted arguments and justifications.

Footnotes also memorialize a person’s fifteen minutes of fame in and about great events or amongst historical figures.  Those asterisked, margin-numbered, individuals occasionally have stories as compelling as the historical figures to which their stars are appended.  Yet, the paths of those lives are harder to research and more difficult to follow.

The music is original - written by Danny Cowan and, his then-wife, Tracey Cowan.  On this release Tracey sings.  She has a deep-throated sexy voice that perfectly compliments Texas-style electric blues.  Danny plays guitar and also sings. The remainder of the “Group” is comprised of Craig Ricks on bass and Hector Gonzalez on drums.  The album was produced by Marius Perron of TAZ Productions, San Antonio, TX.  That is all I could find out about the band at the time I downloaded the album.

The music is hot blues.  Danny is a white blues guitar master with shades of Bob Wills & The Texas Playboys, B. B. King, Eric Clapton, Jimi Hendrix and Stevie Ray Vaughan all rolled into one guitarist.  The songs are wonderfully written and the band is smoking.  Best of all the album was, and still is free!

Recently, I heard Danny Cowan’s name come up in connection with a 1976 appearance on the TV show “Austin City Limits” with an obscure band called Augie Meyers & The Western Headband.   It was only thereafter I discovered Danny Cowan was the ultimate rock and blues footnote.  He is the man who readies the audience for the headliner.

Danny did shows in the 1970’s with Doug Sahm as the Sir Douglas Quartet and opened for Jimmy Reed, Gatemouth Brown and Willie Nelson.  In the mid-1980’s he formed his own band which opened for Chuck Berry, The Supremes, Foghat, Roy Buchanan & many other headliners.

The Danny Cowan Group is no longer together.  This album and the group, like Danny, are a footnote to great electric blues guitar music.

Danny has formed a new band - the Danny Cowan Band.  His ex-wife is no longer with him (although he still does some of the old material they wrote together).  Rick Jackson plays drums. Bass is played by Paul Everett.  Ed Fry has taken over the vocal duties. Danny just plays guitar. I don’t think they have released an album but a few new tracks can be heard on their website.


Footnote: The album is still available free at http://music.mp3lizard.com/dogtrax/.  A  non-compressed pristine version is available directly from  DogTrax Records for $10 at http://www.dannycowangroup.com/Bandpage.html where you can also listen to the entire album online.

Hi. Just an update on Danny Cowan's current band. With the exit of Ed Fry, the Danny Cowan Band is now a trio with Danny and Paul Everett doing all the vocals. The band is actually tighter and more powerful as a trio. On July 29, 2011 Tracey Cowan (Bauer) flew in from Texas to do a show with the band in Rockingham, NC. They performed the entire 'Driving Back to Texas' album and it was a truly great evening. The band looks forward to continuing as a trio and still doing some performances with Tracey in the future.
Rick Jackson Drummer for DCB.

It's kinda funny, as I too happened upon this band by luck. For me, the song that I love is Blue is the color of my heart. The mix of the guitar and vocals is blues at its best. I actually would love to find a way to get the music notes, as I want to learn to play it n the guitar.
If anyone knows how to get those, please post here.