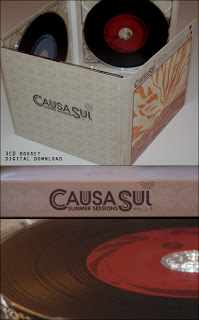 I’ve been told that Andromeda is the closest spiral galaxy to us and Alpha Centauri is the closest star.  Sorry, but I’m here to tell you that scientists have got that wrong on both counts.  Stoner/Psych label Elektrohasch, with it’s ever expanding constellation of blessed out heavy psych bands is definitely the closest galaxy and their latest release, Vol 1-3 by mind-expanding, space explorers Causa Sui is without a doubt their brightest star.

Following up on their 2005 debut and their 2007 follow-up, Free Ride, Causa Sui have crafted the universe’s most infinitely listenable cosmic adventure that even with the naked eye (ear?) shines more luminous than our sun.  Over the last two years, the band has lost itself in its own universe of jamming and recording, leaving vocals behind and fusing saxophone into their heady mix of heavy psych, jazz and krautrock.  What was born from the big blast of these sessions is about as mind-blowing as the concepts of space travel.

Spread out over 3 CD’s (or three vinyl LP’s) we get a zero gravity journey through realms of ambient rock, repetitive groovy heavy dynamic cycles, blurring time structures, space rock reverb, and jazz rock jams.  The first song on disc 1.  Names like Can, Hawkwind, Pink Floyd and Hendrix get bandied about when describing these guys, but I wouldn’t hesitate to drop a big nod to Elektrohasch’s own label mates, Colour Haze, with it’s looping, intense guitar based grooves, and My Sleeping Karma with it’s search for spiritual relevance.  Simply put this album is a stunner.

“Visions of Summer,” sets the lift off pad perfectly.  Lost within it’s 24 minute groove, we get tripped out keys, mind-melting, hypnotic, looping guitar riffs, blessed-out ambient breaks, deeply funky bass, and some of the best krautrock drumming you’ve heard since Can.  The song grooves, wildly and passionately, barely contained with it’s structure, weaving and bobbing as it leaves the stratosphere in search of extra-terrestrial life.  Brown drawfs shoot by to the left, black holes to the right, and still the song keeps on delving deeper on its cosmic journey.  This isn’t background music, its far too compelling for that.  Even through it’s quietest passages it demands attention, insists you let loose of gravity and soar.    By the time the guitar really explodes in an afterburner of fire, twenty minutes into the song, it’s impossible to know which galaxy is approaching next. Give the video below a play and prepare to be transported.  Give the song time to develop, let it breathe easy before you make up your mind.

Each song has it’s own heart, it’s own flavor, no matter which space route it takes.  The songs that bring in the sax really fly off, adding a whole new, experimental jazz power to the flight.  If you’re a fan of space rock, psychedelic explorations, stoner jams or any of the bands mentioned earlier, this is not one to miss.  One of the more stunning releases of the year.

or buy the box set at: Elektrohash Records

Apparently, Galaxy Causa Sui isn’t the only neighboring star system.  Close by, but clearer farther out there (way farther!) we approach the spiraling, spinning mass of cosmic frivolity that is Schleusolz and their latest release The Weinheim Experiment.  Combining banks and bank of synths, beats, and melodies that seem to come from a manical, demented intergalactic carnival, The Weinheim Experiment is a futuristic, trippy journey through space rock electronica, dark rock, cosmic disco, classical composition, and a strangely retro feeling to create  . . . I’m not sure what they created, but it’s one freaky, avante garde ride that’s for sure.

Originally earth-born in Germany, Schleusolz is the mad scientific creation of studio wizards Worsel Strauss and Schani Wolf.  Not content to remain gravity bound on terra firm for long, they launched their Schleusolz spaceship in 2009 with their debut Running Out of time.   I never heard that one, but when this one crossed my desk, I was intrigue.  Recently, I’d been on a Henry Mancini kick.  After all, he is one of the greatest film composers of all time ("Pink Panther", "Peter Gunn", and the stunning "Romeo and Juliet Theme.") plus he’s totally retro-swingin’ sixties cool.  So when I saw this disc described as “Henry Mancini on Acid,” well, I just had to hitch a ride.

The Weinheim Experiment bounces around between whimsical, carnivalesque compositions (each of which seems to have been performed by a drug-adled clown) and darker, more intense, quasi-industrial dirges.  For me, the industrial-tinged pieces work best, like the frightening dancefloor intensity of “Sid Goes Dancing,” with it’s spit out, throat-garbled German vocals, or “The Numberer,” with it’s looping bass and grinding guitar intro.  “The Shepard’s Dream,” is a terrifying dark classical journey into the messed-up recesses of these cats collective mind, clearly not a happy place to be.   But this darkness is countered with the catchy, bouncy pop of “She Became a Toy,” or the retro-wartime, cigarette smoky club, cabaret excursion that is “Superboy.”

“Sell Your Soul,” attacks with a barbaric synthesizer force a la Cabaret Voltare.  But perhaps the album’s true highlight is the darkest, most sinister cover version ever of a Cat Stevens song.  “Father and Son,” unfolds at a funeral pace, layered with black synths and crawling vocals.   A full out, wild psychotic ride no matter where you get on.