Bernadette Seacrest and Her Provocateurs - The Filthy South Sessions 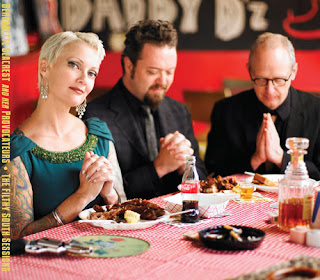 I can’t always listen to rock, folk or country. Just like I can’t handle all “wasabi” all the time all that well.  Occasionally, I need the sorbet between new releases to clean my aural palate.

Only the finest restaurants serve sorbet between courses.  This smooth, luscious, sultry, frozen concoction not only prepares your taste buds for the next onslaught of flavors - it is a scrumptious dessert in and of itself.

Lately, I have listened to an enormous amount of new classic rock, pop, metal and alternative.  At some point it all started to sound alike.  Everyone lost their girlfriend, wanted to rock me or wanted to tell me had bad their troubles or the troubles of the world were in some semblance of 4/4 time.  I reached a breaking point.  It was clear to me that I needed to cleanse my palate.  I desired a bit of something that was not ice cream, jello, candy or Cake.  Rather, something more intellectual, calming, smooth yet complex. I needed music with more reflection. I wanted to hear what you would expect James Bond to listen to and less of an aural  “Girls Gone Wild” video.  However, it still had to be sexy.  I found it.

Bernadette Seacrest is a tattooed siren evocative of the great jazz singers of days gone by.  Think Lena Horne (may she rest in peace), Rickie Lee Jones, and Madeliene Peyroux all rolled into one. Seacrest studied classical dance with the Los Angeles Ballet and American Ballet Theatre until she suffered an injury that limited her ability to brisé volé and do other ballet moves. She loved the pageantry of drag and went underground re-emerging in New York’s early 80’s street punk scene as a fetish model, makeup artist and clothing designer.  In 2001, after moving to Albuquerque, she joined the rockabilly band The Long Goners as a singer of rebellious anthems. By 2003, she began to dabble in jazz.  Seacrest formed a new band- Bernadette Seacrest and her Yes Men - that specialized in jazz standards and originals penned by her well-known bassist Michael Grimes.  Her musical style became evocative of the smoky jazz clubs and speakeasys of the 30’s and 40’s.  In 2003, she started a new project, Bernadette Seacrest and Her Provocateurs with guitarist Charles Williams and bassist Kris Dale.  Her now almost completely original music took on a dark vintage jazz sound with a deep south bluesy feel.  The songs are sparsely orchestrated - mostly just Bernadette, a guitar, a bass and, occasionally, an interesting cacophony of percussion.

Bernadette Seacrest and Her Provocateurs’ most recent release is The Filthy South Sessions. The songs are written by her guitarist Charles Williams.  Williams shows an innate ability to turn a phrase that Seacrest can then emote in ways that stir the soul:


The world is just one big Game of Craps

Everyone’s bluffing, ain’t got no cash

And if you fold you gotta face the facts

You got nowhere to go from here but up

Someone’s always be talking about you

And someone’s always gonna have one hand in your pocket

While others are tryin’ to cop a feel

Each of the twelve songs stirs desire.  They make you want to meet Bernadette.  She is the epitome of a chanteuse.  By the third song you will be craving a bourbon,  a cigar, and a fedora. The musicianship is impeccable and unpredictable.  It is not often that a jazz trio can transcend the cocktail lounge.  This one does.

Okay, I’m now ready for my next  rock music meal.

Posted by The Ripple Effect at 1:28 AM