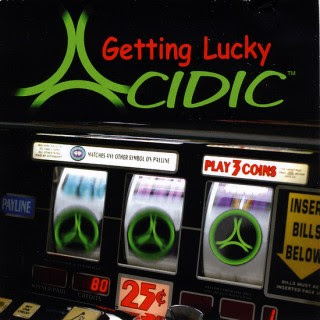 Precocious.  The act of being ahead of one’s times, developing early, talented beyond any reasonable explanation for being so damn young.  Yep, that pretty much describes this blazing sopomore album from just-ending teenagers, ACIDIC.  Forget any preconceived notions you may have about teenage bands before you pop this on your ipod.  Yeah, I know, names like The Jonas Brothers or Hanson come to mind --at least my mind-- when I think of real young bands, but trust me that’s not what we’re dealing with here.

With an average age of just 19, I had no inkling of the maturity these guys bring to their music.  And rather than playing some version of a snotty, anyone-can-do-it, Green Day-by-the-numbers, pop-punk, the boys of ACIDIC make it clear that they’ve studied well under the masters of rock.  Sure there’s some Green Day here, and a touch of a whine in the vocals, but it never approaches annoying.  Instead, all that I hear are the massive retro-classic rock rolling riffs, punky chops, and big guitar flourishes.

Along those lines, “Strata Red,” is one of the major standout tracks here.  Kicking off with a big Bonham intro, the boys barrel headfirst into a rollicking Zeppelin riff that can only be described as totally solid.  The guitars drop out for the first vocal verse but come roaring back with a vengeance, chugging and spurting, big and beefy.  At this moment, I guarantee you, you’ll stop thinking of these guys as a teenage band.  In fact, no further mention of their youthful age will appear in this review.   What we got here are some serious rockers, locked in, and blasting it out with frenzied abandon.  From start to finish-- including the easy-to-chant-along chorus-- this song is a winner.  “Retrograde,” also stands out as the work of a band to be reckoned with.   Riding a retro-riff so big and ballsy, I bet Tony Reed, the mastermind behind Stone Axe would be nodding with approval.   There’s a touch of an emo feel here, mostly in the vocals, but again this ain’t no teenage punk band.  This is full-on, Ripple approved rock and roll.

While those two tracks are my standouts, they’re by no means the only strong cuts here.  “Tell Me,” blazes with a slicing intensity, “Closer to the Sun,” feels like it’s the boys first neo-epic, while “The Big Bang,” is their most Green Day-ish, radio ready, should-be hit.