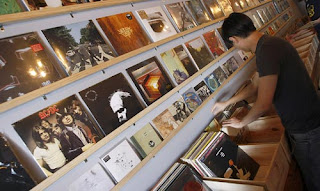 News that just warms our Ripple hearts.  From the Telegraph, the British Newspaper.  Vinyl sales continue to rise as music fans appreciate the portability of the download, but love the feel, look, and sound of vinyl.

At the Ripple, we're firmly committed to this point of view.  With new double LP, gatefold vinyl releases of JPT Scare Band's Acid Blues is the White Man's Burden, and the grand re-release of Poobah's classic 1972, protometal masterpiece, Let Me In.  Both albums coming this summer, not to mention some nifty split 7" coming from Stone Axe and Mighty High and another from Ripple favorites Grand Atlantic and Sky Parade.

From the Telegraph:   Sales of old-fashioned albums rose by more than five per cent last year, figures from the Official UK Charts Company showed.

CD sales have fallen by a fifth over the same period, leading to some manufacturers threatening to halt their production.

Despite accounting for less than one per cent of music purchases, American sales of vinyl topped almost three million, an increase of a million records.  Music website Amazon.co.uk said it had more than 250,000 vinyl albums in stock to meet the growing demand.  Internet search engine Yahoo meanwhile, has reported a 210 per cent increase in searches of the phrase "blank cassette tapes" and a 110 per cent rise in users seeking “music cassette tapes”.

The new trend is believed to have originated from New York teenagers, leading to a boom in record player and turntable sales. Most vinyl records bought over the past 10 years were by DJs and dance music fans, but recently more rock and country music albums have been sold.

Some of the most popular records include music from Florence and the Machine and The Courteeners and re-released Jimi Hendrix and The Red Hot Chili Pepper albums.

Music experts said that vinyl sales figures could be even higher because official British statistics do not include sales from smaller record shops and albums sold at concerts. British sales of seven-inch records peaked in 1979, with 89 million copies sold, but as CDs became more popular they slumped to less than 180,000 in 2001. Last year sales rose to 223,000.

Some vintage blank tapes are reportedly selling for more than £20 on auction websites.

"Downloads are quick and easy but nothing beats the joy of holding a heavy piece of vinyl,” Steve Clancey, a Brixton rare records and vinyl dealer told The Sun.  "Vinyl sounds richer and there's something special about the cover art and sleeve notes which you cannot get with digital tunes."

Latest figures show that digital music sales accounted for more than a quarter of the music industry's global income in 2009 for the first time.  Almost 30 per cent of global music revenues were generated via digital downloads last year, generating a total of £2.6billion.
Posted by The Ripple Effect at 12:22 AM