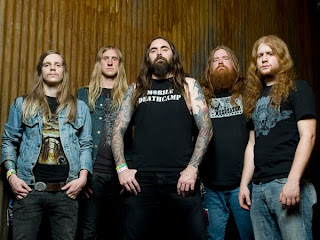 Athens, Ohio's blackened thrash masters, SKELETONWITCH have a busy summer lined up, as they've been tapped for Ozzfest, as well as a Canadian tour with HIGH ON FIRE. The band will be appearing on the second stage at Ozzfest along with former tour partners GOATWHORE and SAVIOURS and other acts including DEVILDRIVER, BLACK LABEL SOCIETY and  KINGDOM OF SORROW. The band is currently several weeks into a tour with CANNIBAL CORPSE, which made a stop at the annual New England Metal and Hardcore Fest in Worcester, MA. That tour wraps up on the 15th in Tampa, FL.

The band's upcoming dates are as follows:

SKELETONWITCH are supporting "Breathing the Fire" which was recorded in Seattle, WA with legendary producer, Jack Endino (Nirvana, High On Fire, Soundgarden). The album was released by PROSTHETIC RECORDS on October 13, 2009 and debuted at number 151 on the Billboard Top 200 Chart and number 2 on the magazine's "Heatseekers' Chart."
Posted by The Ripple Effect at 12:37 AM

Oh so happy to hear that Ozzy has a new album coming out. Ozzfest will live forever. www.ozzy.com/