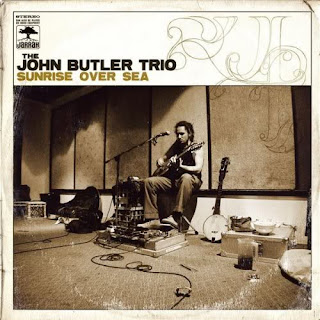 Okay . . . this little gem has been in steady rotation for what feels like forever. I must have picked it up when it originally came out, way back in . . . 2004? Are freaking kidding me? In one way, it’s hard to believe that I’ve been listening to this album for all this time, in another way, it’s not all that surprising. If you’re not familiar with John Butler and his fabulous band of stalwart musicians, then please, go out, get yourself a copy of Sunrise Over Sea and kick back, grab a cup of tea, cross your legs while sitting in a Queen Anne, maybe smoke a little of that funny stuff, roll out your yoga mat, hug a tree, get all hippie with your bad selves, and enjoy.
John Butler is Australian (though born in the U.S.,) and has managed to fuse the sounds of bluegrass, country, folk, Americana, and straight up rock n’ roll to create his own signature sound. Combining socio-political lyrics with this stripped down style of music seems to make the man’s ideals, positions on environmental preservation, social change, mental perception on the world issues at hand feel that much more real and  . . . well, honest. It’s one thing to preach about world change and hide behind the relative safety of the studio walls, it’s something all together more real to get arrested for protesting a governments wrongs or to live in a tree to make one’s point. Don’t know about any of you, but I can’t really imagine living in a tree . . . though, in some ways, it totally sounds cool!
On to the album!
Kicking off the disc is “Treat Yo Mama” is a heavy blues-based burner, powered by a swampy sludge groove, filled with some outstanding slide work and made infectious by the catchiest of catchy choruses. Butler’s vocal performance is more rapped than traditionally sung, building a more dramatic and immediate mood than sung otherwise, and his lyrics initially will have you thinking that the song is all about treating one’s birth mother, one’s flesh and blood with respect. But as we get to the last verse, the meaning broadens and becomes all about treating our earth mother with respect. The way he weaves the lyrics never ceases to amaze me, and the way he strung these words together shows a dude who not only has a mastery of the English language, but someone who is clear in thought with the conveyance of his ideas. Musically, while you’re getting your primitive groove on, listen to the guitar work as Butler effortlessly plucks notes from some hidden treasure trove of taste and class. 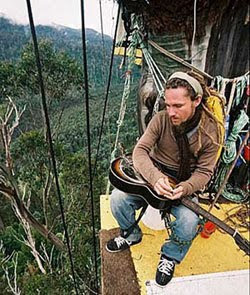 One of the underlying themes in John Butler’s music is corporate greed and how big business has no morale qualm with raping the earth so that a small percentage of humanity can live it luxury. No song captures this message as well as “Company Sin.” With upright bass boppin’ along and polyrhythmic percussion poppin’, the song has a vibe mixed in reggae and juke joint jazz. Butler’s voice is rich and soulful on this particular track, and his passionate performance draws the listener ever so close to standing in a dusty wasteland created by higher profits. The guitar solo is wah drenched funky jam with a huge jazz tone running through it. I find it a weird contrast of moods to hear music so upbeat and soulfully powerful, yet to have the lyrical content as dark and filled with personal struggle. But, like the reggae masters who called for revolution in thought and, ultimately, through action with their airy style of sound, John Butler has culled a style of music from a similar vein.
“Betterman” is funky, upbeat jam. Again, the rhythm section provided the addictive groove while John Butler gracefully plucks notes or caresses the guitar neck with a slide. Pay close attention to the guitar work on the one . . . the harmonics, the slide, the fluidity that Butler plays with . . . damn! I love how he also has the presence of mind to stop playing and just lets the rhythm section push to the song along, then jumps back into the jam. The solo is slide players wet dream. Listening to him play is one thing, watching his utterly mindboggling. It simply makes me want to break my own fingers in frustration.
“What You Want” is a slower jam, but no less powerful. In fact, this song may be one of the heaviest tunes on the album, and I can only think that’s attributable to the open space for the sound to flow, as well as the lush richness of Butler’s voice. Strings arrangements fill some of the nooks and crannies with sound, but in essence, the song is the trio creating a picturesque beaut of a tune. The melody throughout is infectious, though laced with a subtle sound of sadness, it also has these great uplifting moments. Dynamic in tone due to the volume swells, the vocal harmonies, and the individual musical performances, “What You Want” is undoubtedly the song I hit repeat to every time through, and I find myself getting lost in the textural sounds and the countless musical subtleties. 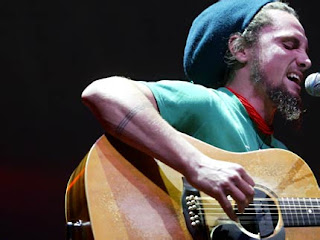 “Seeing Angels” never fails to make me think of my wife. It’s one of those sensitive songs without being sappy. It’s one of those songs that will make most guys sit back and nod in respect towards their significant other, makes them realize that they are really nothing without a woman by their side. The second verse is a lyrical killer. Fuck. Dude can write a moving tune. “Zebra” is another funky number and the first song I remember hearing from the disc. Packed with great tones, the warm sounds of the upright bass groovin’ it’s groove, the vocals all over the place . . . jumping into the mix at odd times, emotion drivin’ guitar work, drums snappin’, crackin’, whackin’ away on the upbeat, on the downbeat, on the sidebeat . . . killer tune!
Sunrise Over Sea is, without a doubt, one of those albums that I can listen to anytime of the day. There is so much going on, not just in the music but in the lyrical ideas and conveyance. And, the more I listen to this album, the more I think that John Butler is a genius. I really don’t understand why he hasn’t picked up more popularity in the States, especially with the mindset of today’s nation. Who knows? Now that BP has gone a fucked life as we know it in the Gulf of Mexico, maybe people will gravitate to the words in the message of John Butler and realize that this earth is the only mother that really matters. Or then, of course, there’s also a greater chance that our nations media will bury the story under government propaganda and celebrity bullshit. Anyway, Sunrise Over Sea is a great disc, you should check out the tunes I’ve highlighted, then check into the rest of the album coz’ the whole thing is brilliant. Me? Well . . . I’m going to the record store to see if I can track down any of his more recent albums . . . after I take a nap in my garden.  -  Pope JTE