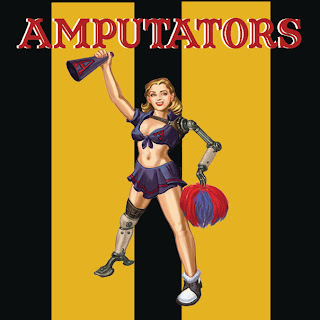 The Amputators touched my soul. And then they went on to touch me all over and wouldn’t stop even after I said “no!”  These four derelicts from the ski bum town of Steamboat Springs, Colorado take advantage of the state’s relaxed medical marijuana laws to fuel their immature brand of obnoxious punk rock. If you’re easily offended, then you need to get the stick out of your ass and listen to this record

Taking inspiration from such low brow artists as The Cramps, GG Allin, Killdozer and Scissorfight, The Amputators are hell bent on pissing off all the hipsters and stealing their beer. The sound is aggressive, based around the distorted guitar stylings of Rusty Scalpels. Hack Limbsley pounds the 4 strings, Hans Loptoff mans the tubs and El Doctor screams and blows harmonica. Based on his lyrics, that’s probably not the only thing he blows. Unlike a lot of modern punk bands, Amputators are not afraid of humor. At least, I hope these songs are based on humor and not personal experiences. You never know what goes on in these little ski towns off season when the townies come out to play.

“Conjugal Visit” is an uptempo boogie monster about starting up a family behind bars. The heavy breakdown in the middle lets you know that it beats making license plates. “Lighten Up Jesus” is a slow heavy pounder that will have the local clergy covering the ears of the innocent while church is robbed of its wine. You’ll probably go to hell for even thinking about listening to this one.

The Amputators aren’t for everyone, but if you don’t like them, chances are I won’t like you either. That’s just fine for everyone involved. It will come as no surprise that their album is not available in any stores, so you have to actually make contact with these dirtbags to get a copy. That means they will have your address.

http://www.myspace.com/amputators
Posted by The Ripple Effect at 12:10 AM

All I can say is WOW! These guys rock, not as much as Mighty High but close. Now, if only they would respond to my request for an album, my impatient ass can't wait!!

I know I'm being impatient but how long did it take you to get these guys to respond to your request for an album or did they contact you?

Be honest with you, I don't know. We didn't request it, I know that. I haven't actually requested anything in while. But I don't remember if it was sent in or if Woody went out and bought it himself.