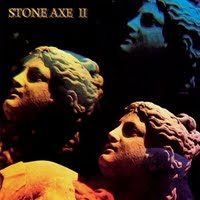 When it comes to mid-tempo heavy rock, Stone Axe are the most dedicated muthas on the planet right now. Too old and unfashionable to be considered “retro,” Stone Axe eat, shit and breathe the full gamut of classic rock from the late 1960’s through the early 1970’s.  Stone Axe II picks up where 2009’s full length debut left off but also offers quite a few surprises. The first album was heavy on British style blues rock of bands like Free, Led Zeppelin, Cream, Fleetwood Mac (Peter Green era, only), etc. This new one touches on just about every style of classic rock. Listening to Stone Axe II from start to finish is like listening to a good rock radio station with a good DJ and no format restrictions.

Once again, Tony Reed Smith plays most of the instruments and vocals are handled by the incredible Dru Brinkerhoff. How the hell do these guys make records that sound so natural and live when Tony’s overdubbing one instrument on top of the other? Production is top notch and the guitar sound is great. Tony’s guitar playing is always inspired, he makes it sound kind of like Paul Kossoff sitting in with some of the best rock bands of all time. Dru’s voice is powerful and brings to mind Paul Rodgers, David Coverdale and Ian Gillian at their peak. Touring bassist Mike DuPont and drummer Mykey Haslip make a few appearances and it’s hard to tell the difference from the songs where Tony plays all the instruments.

Fans of the first album will love songs like “Old Soul” and “Live For The Day” because of the strong Free influence. “We Know It’s Still Rock N Roll” takes inspiration from AC/DC’s “Big Balls” with Dru doing the best Bon Scott impression I’ve ever heard. “Chasing Dragons” could be from an old Faces album while “Just A Little Bit” recalls early 70’s Rolling Stones. They hinted at this style a little bit on the first album but these are full blown tributes. “One More Time Before I Die” is an instrumental that boils down The Who’s Tommy into about 3 and a half minutes.

Thin Lizzy fans will love “Those Were The Golden Years” because it sounds like “Little Darlin” with Tony doing a spot on Phil Lynott impression. Tony also sings on album closer “Turn To Stone,” the biggest departure for Stone Axe. This is pure Procol Harum worship bordering on Moody Blues with a Jethro Tull middle section. There’s enough mellotron and Hammond organ to make Keith Emerson jealous.

Stone Axe make the kind of classic rock that real classic rock fans want to hear. Buy their album so they can go on tour and spread the gospel. As good as the records are (and there are a bunch of cool singles and EP’s to check out, too) they are best witnessed in yo face. They’re not afraid to set up full stacks in the crappiest punk rock dive and blow the toilet seats off.

http://stoneaxeband.com/
Posted by The Ripple Effect at 12:34 AM

I had this album from Tony 2 days after ordering it. Tony is a true professional. I myself was skeptical of the album since it contained all the studio material from the Extend Play EP. One listen and that was right out the door. This is one of if not the best album of 2010 so far. It is on constant play in my iPhone. I can't get enough of it.

STONE AXE II sounds like a British Rock best of LP that never was. From the classic period artwork to the warm sound of the music. The songs feel familiar but are fresh and original. I was hooked the first time I listened to this and it gets more under my skin with every listen.

Take not kiddies: this band is the real deal. If you feel bad that you were born too late to see Thin Lizzy, Humble Pie or Free. Here is your chance to hear and soon see the band who is on the forefront of the New Wave of Classic Hard Rock. For us old timers, STONE AXE II restores our faith in "The Rock" and rekindle the fire of what made those bands go great.

Tony Reed is a songsmith who's disciple to his craft is strongly evident here. From the melodies to his instrument playing and recording of the material. He shows mastery of his art. Dru Brinkerhoff writes the lyrics to the art that he soulfully sings. He tells stories of old school rocking, the love of playing vinyl, chasing dragons, and given the gal the ole in & out. Live they are powerful and professional. The rhythm section of Mikey Haslip and Mike Dupont create a stron backline for the band.

STONE AXE II is a more focused record, contructed from classic British sounds thread together the best of AC/DC, SWEET, FREE, THE FACE with even a touch of THE WHO and PROCOL HARUM. This record is a progression in the STONE AXE sound which is truely their own.

The band is playing a several dates with doomers ST. VITUS down the westcoast in the USA in June of 2010. STONE AXE is also entertaining tours in the U.K. and Europe in the fall. DO NOT miss a chance to see this band live!!

Buy this record, you won't be sad!!

brianinaron nails it...this album is the ultimate SHEEEYIT for you older classic rock hounds out there. I just saw these guys tonight, and I hate to use internet shortcuts but OMFG you have got to see these guys live. The albums are awesome, but to see them live takes you back to the day...

What you've been clamoring for for the past 30 years but haven't heard...

Then you guys are gonna love this! We've just been asked by Tony Reed and Woody of Mighty High to release a brand new 7" split single for the boys. That's right! Stone Axe and Mighty High, 7" split of exclusive songs, not available anywhere else.

Coming to you soon from Ripple Music!