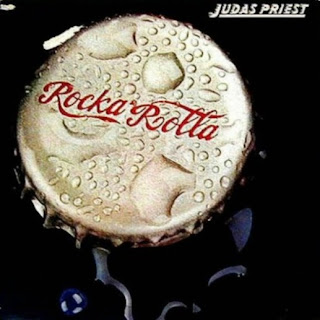 Anytime that Racer and I get together and sit down for a meal, the safe bet is that a good two hours will pass with us talking about music. In fact, the last time we met up, I’d say we spent . . . carry the one . . . find the lowest common denominator . . . about ten hours discussing all that is music. And one of the bands that frequented many of those conversations was Judas Priest, which then got me thinking about the band’s first album. Rocka Rolla, for some reason or another, is the red headed bastard child of the Priest catalog, and I’m not totally certain why. I know that when trying to compare it to anything post-British Steel is near impossible simply because the sound and musical direction had changed so much. In actuality, the band’s sound really took the most drastic turn with Hell Bent For Leather. Up to that point, Sad Wings of Destiny and Sin After Sin held fairly close in the pattern set with Rocka Rolla’s fuzzed out, blues-based psychedelia.
So, here it is . . . 1974 and this wee little band out of Birmingham, England releases their debut album and it doesn’t even remotely sound like the style that they would become famous for. Rocka Rolla has more in common with bands such as Poobah, or Sir Lord Baltimore, or Leaf Hound than what we’ve all come to know and love as Judas Priest. But folks . . . that’s not a bad thing! Bob Halford (as he was referred to back then) and his stratospheric pipes, K.K. Downing and Glen (that’s right . . . one ‘n’) Tipton’s dual guitar attack seamlessly shifting from rhythm to lead, Ian Hill’s no frills, played-in-pocket low end, and John Hinch’s steady hand steering the ship, Rocka Rolla is a precursor to the pre-Hell Bent For Leather releases from the Priest. Maybe a little primitive in sound, but when you sit back and listen to the groove and soul to the music, it’s easier to see that this is an overlooked gem. 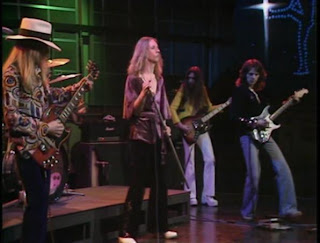 The title track has long been a favorite tune of mine. The opening guitar riff is laced with those elements that would later make up that classic Priest guitar sound, as my fearless brethren, Racer, has often stated, a tone that actually sounds like metal. Capturing the essence of all that rock that became popular in the early to mid 70’s, “Rocka Rolla” is the most commercial track on the album and has a string of lyrics that I’ve found myself singing when I hadn’t listened to the song in years. Downing and Tipton shine. Between the heavy blues riffage, these ax men whip out some great lead work and give us a glimpse of the great things that would later erupt from their fingers. Halford’s voice borders on crooning lounge singer as he emits this sultry bluesy thing, gruff when he needs to be, but all around smooth. We even get some sneak previews of the higher pitched screams that became the man’s bread and butter. Of special note, check out the harmonica work. Yeah . . . not what one would expect with Judas Priest, but then again, back in 1974, we didn’t know what to expect.
“Never Satisfied” is a bruiser. Every time I hear this, I try to imagine what it would have been like to hear this for the first time in ’74. Sure, at that point, heavy rock wasn’t totally new. Zeppelin had released the Brown Bomber and Sabbath, well . . . was there anything heavier than Sabbath at the time? But, the point is, the guitar tones, the heavy groovin’ rhythms, the smoky whiskey drenched blues voice all worked in tandem to create a menacing sound that taken apart from Priests’ peers would have be otherworldly. Co-penned by the bands original singer, Alan Atkins, “Never Satisfied” has a certain blues-y factor to it, what with the chord progressions and lyrical content, but there’s also this underlying attitude to it that I think bares a semblance to latter day Priest and the metal that they would eventually forge. The guitar solos from on this one are doozies, as well. Soaring and ear splitting, Downing and Tipton were kismet from day one! 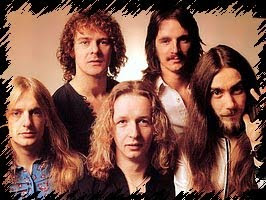 The thing with early Judas Priest that really shook my foundations and I found unnerving was their slowed down, psychedelic material; going back to tracks like “Dreamer Deceiver” and “Epitaph” from Sad Wings, and “Last Rose of Summer” from Sin After Sin. By the time I heard the chilled out psyche sounds of “Run of the Mill” and the space-y Winter Medley, I was pretty numb to Judas Priest of old. Now listening to this stuff, it’s a hundred times cooler than ever! “Run of the Mill” is packed with these great emotional interludes and dynamic shifts of metal that make the song a quasi-epic. The mini jam section in the middle of the song is laced with LSD as the guitar notes seem to waft through the air like so much pot smoke. All the while, the rhythm section is just humming along in the background, doing what a world class rhythm section is supposed to do. Slowed down tracks like these are, in my opinion, when Halford shines the brightest. Dude has a voice that can melt glaciers!
Rounding out the album with a hard rocking edge is “Dying to Meet You,” a song that initially slithers out of the speakers rather than leaping out like so many rockers. The slow distorted riff is as imposing as any out there, and then when the dual guitarists kick their rigs into a clean tone and Halford’s Sinatra-like vocals croon . . . phew! “Dying to Meet You” reflects the tumultuous times well with lyrics that paint a dark and vivid image of the psychosis of those going to war. Then, the song bursts into a galloping rhythmic beast, kicked into overdrive by a guitar solo that will kick your ass into orbit around the moon. Halford’s vocals switch up with the change in mood of the latter half of the tune and we hear the makings of classic Priest. Heavy, driving, dark and imposing, yet tasteful with a touch of classical headiness.
I could never with a straight face say that Rocka Rolla is my favorite Priest album, but I’m sure I could create some bizarre category where it would rest comfortably in the top five. Maybe, the “best 70’s psyche blues that no one talks about” list . . . anyway, most fans of Judas Priest don’t pay too much attention to the band prior to British Steel, and even fewer before Hell Bent For Leather or Stained Class. Rocka Rolla isn’t the leather clad metal militia that the band became in the 80’s. In fact, the band comes across as star crossed hippies who were dissatisfied with all of the peaceniks of the day and then experimented with hallucinogens to further their musical vision. Where Rocka Rolla stands in comparison with the heavy fussed out, acid blues rock of the same time period is beyond me, and nor do I really care. I hear a collection of songs that have a good groove, a warm though imposing tone, and melodies that I can’t help but sing to every time that I hear them.  -  Pope JTE

Nice one, Racer! Always had a soft spot for this one, especially the song "Cheater."

Love the title track. Had this on vinyl as a kid.

It's alright, but it's just everything else they in the 70's is way better so I normally skip over it. To me most Priest albums are either great, good or really rotten. Rocka Rolla might actually be their only truly mediocre album.