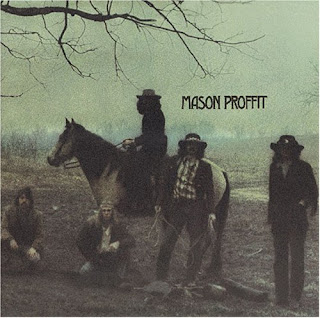 Listening to Mason Proffit’s first album is akin to a gentle ride on horseback across the open plains of the Western United States. You don’t need to close your eyes too tight to imagine the soft breeze whispering lullabies through the low lying brush of sage, chaparral and mesquite; the rich aroma from the natural vegetation dancing through the air . . . the euphoric sensation of the vast open land, the call of nature, the freedom of space . . . the distant mountains, in all of their purple majesty, marking the horizon and a land of promise . . . various breeds of hawk and eagle performing an aerial ballet to the tune of the wind and the beat of your heart, their cries a serenade for the lonely traveler. Wanted . . . Mason Proffit is American folk music with a healthy dose of country and a pinch of rock n’ roll, and it’s a marvelous soundtrack for a life out West or for a mental getaway from the hustle and bustle of big city life.
Never a big fan of country music, I approached this disc with a little apprehension. What was an old metal like me going to find of great relevance in a country rock album? Well, as it turns out, I found a lot of things compelling about Wanted . . . Mason Proffit. First off, the mellowed out rock and the rebellious country tones transposed my being from riding a desk chair in suburban Southern California to that of one riding that aforementioned horse across the countryside. The escapism of the music is fantastic and the warm tones took me back to when I was a kid watching Bonanza with my grandfather, a time when I thought it would be so cool to be a cowboy. However, it’s the social commentary infused in the lyrics that grabbed my attention the most, drew me deeper into the music, and made me lean back with a smile and a glimmer of greater understanding. Ultimately, it’s the combination of the loner cowboy turning his back on society due the strength of his personal beliefs and ideals that became way too attractive to dismiss, and the music of Mason Proffit took on a whole new meaning. 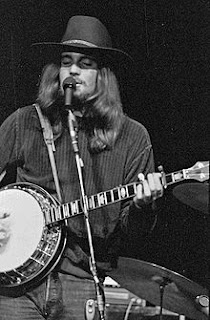 In a direct attack aimed at the corporate world, Mason Proffit penned the album opener, “Voice of Change.”  Here it is, 1969 and the hippy movement has been in full swing for a few years, and Mason Proffit come out with a largely overlooked anthem that encapsulates many of the ideals of the entire generation. Looking for a world devoid of pollution created by big business, the suit and tie guy, the establishment, these country rockers took more of a punk rock stance that many of our modern, so-called hardcore maestros. On the initial spinning of this track, I found myself sitting, mouth agape as I heard this heavy strumming acoustic guitar accompanied by a mouth harp, but on subsequent listens, the sound became more natural and an integral part of the song. The whole band works in great unison on this tune, and apart from the striking chorus melody, the drum work provided by Art Nash is outstanding!
“A Rectangle Picture,” a song from the perspective of a kid drafted by the Army and sent to Vietnam, features some subtly chilling lyrics. Sung in a voice reminiscent of Roy Orbison, the vocal tone is dark while the music has an almost uplifting quality to it and would seemingly fit better in a jamboree setting. But getting past the cheerier vibe of the music and focusing solely on the lyrics, I can feel a weight of despair running this music. I love the way these guys use the symbolism of “a rectangle picture in an oval picture frame” to emphasize their feelings that the U.S. shouldn’t have been in Vietnam in the first place, as well as a more personal perspective of the drafted soldier sitting in a rice field feeling more out of place than ever before. 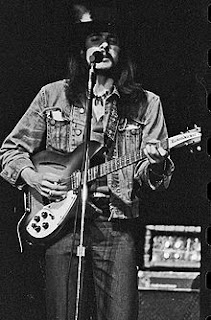 Not all of the songs on Wanted . . . Mason Proffit are socio/political in nature. “Sweet Lady Love” is simply about a guy working the river waterways and finding his love, and then settling down. Pretty straight forward, pretty simple . . . well, that’s until the protagonist of the tale kills a man and the two lovers have to live and love on the run. This tune, in particular, sounds an awful lot like Creedence Clearwater Revival, and it has one of the catchiest choruses on the album. The richness of the vocals are intoxicating while the heavily strummed guitars, textural slide work, and swampy bass lines create a warm and comfortable bed for the two lovers to lay their weary heads.
The standout track on the album, and the one that immediately made me stop to analyze the lyrics, is “Two Hangmen.” Man . . . this song is a stunner, bordering on epic! The song is a tale of, as the title indicates, two hangmen who actually turn out to be the heroes in this whole sordid affair. Rebels who started questioning the laws put in place by the government and who needed to be silenced by Uncle Sam. The symbolism throughout this tune is great and I love the parallel lines that they create, the hippies of the sixties in relation to the two hangmen, and how their free thinking was thought of as infectious and rebellious and unlawful, and how the two men eventually die as martyrs . . . like so many demonstrators at rallies who spoke out against the war in Vietnam. By the end of the song, the music is powered by the heavily strummed acoustic guitars as the two hangmen swing side by side from the hangman’s tree. Brilliant tune!
I wouldn’t say I’ve been fully converted to the ways of country music. I still don’t think that I can handle the depressing twang of straight country, but I also didn’t think that I’d ever drink straight bourbon and like it. So, for the time being, I’ll dip my big toe in the pond of country rock, stir it around a little before I dive head first into the deep end, y’know . . . wade through the kiddy pool until I learn how to swim with the big kids. Wanted . . . Mason Proffit has been a foot wetting process, and as I stand ankle deep in this vast pool of music, I stand with a big smile. The Kentucky-fried portions of the music didn’t annoy me and the poignant lyrics gave my mind something solid to chew on, and I’ve even gone as far as tracking down the bands follow up album, Movin’ Towards Happiness. In a time when the music world was getting three Creedence albums, the first two Led Zeppelin albums, Abbey Road, the first CSN album, The Stones’ Let It Bleed, and the first Santana album, (just to mention a few) it’s easy to see Mason Proffit getting overlooked. The great thing, though, is that the music is timeless and has the ability to touch the listener on several emotional levels. Best listened to while sitting alone next to an open campfire after a long days ride.  -  Pope JTE